When Laura Williams woke in the middle of the night with vomiting and diarrhoea, she assumed it was simply a tummy bug.

As a podiatrist whose work took her to nursing homes around her home town of Worthing, West Sussex, she frequently found herself in environments where infections such as norovirus — the winter vomiting bug — could spread easily.

‘I even texted my boss in the night to say I was pretty certain I’d caught norovirus and wouldn’t be in for a couple of days,’ says Laura.

But rather than making a rapid recovery, Laura, 40, felt much worse.

Alongside the gastrointestinal problems, over the next 48 hours she developed a severe headache, agonising toothache on both sides of her mouth and — terrifyingly — woke one morning to find she could hardly breathe.

‘My neck had completely swelled up overnight and my throat felt like it was closing,’ says Laura. 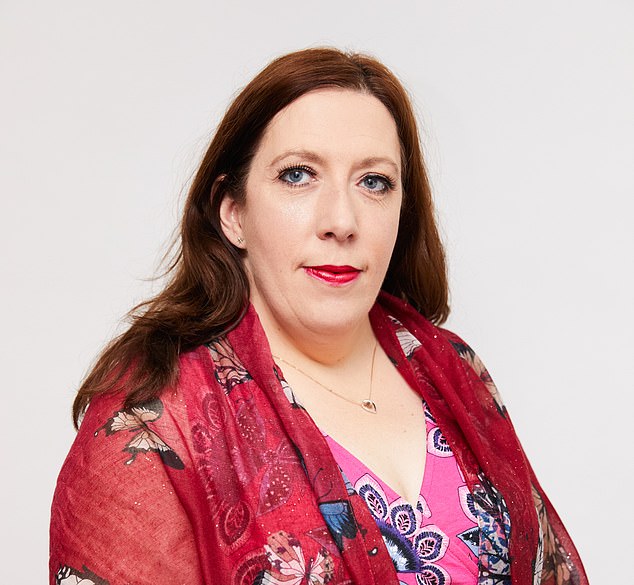 When Laura Williams woke in the middle of the night with vomiting and diarrhoea, she assumed it was simply a tummy bug

Within hours, she was in hospital undergoing emergency treatment for sepsis — a potentially deadly condition that affects almost 250,000 people a year in the UK and kills around 48,000.

It had been caused by several abscesses deep inside her gums.

Sepsis occurs when the immune system overreacts to an infection. This floods the body with cytokines, proteins that make blood vessels widen, leading to a dramatic fall in blood pressure and widespread inflammation, which can result in tissue damage. It can cause organ failure and death.

Fortunately, Laura’s sepsis was caught just in time and after four days in hospital on large doses of intravenous antibiotics and steroids (to dampen the inflammation) she went home.

But her ordeal was far from over. During the following months she experienced a range of debilitating symptoms, from nightmares to exhaustion and repeated mouth and ear infections.

Her concentration was so poor she’d forget what she was saying mid-sentence, and her temperature would fluctuate so wildly that even when the heating was on full blast at work, she would be ‘shivering so much I looked like I was on a rollercoaster ride’.

Laura is one of around 80,000 people a year in the UK with post-sepsis syndrome — physical and psychological symptoms that can persist long after the infection.

There are clear parallels with long Covid — the persistence of similar symptoms that’s thought to affect more than two million coronavirus survivors in the UK.

The difference for Laura was her prolonged symptoms were due to a bacterium from dental abscesses. If they had been caused by Covid, she would qualify for NHS treatment and rehabilitation thanks to £10 million initiative set up last October for those with long Covid symptoms such as breathlessness, fatigue, brain fog and anxiety.

Respiratory consultants, physiotherapists, GPs and other specialists are working together to help long Covid patients return to normal.

As well as specific checks such as a cardiopulmonary exercise test to measure lung strength, these patients benefit from an online rehabilitation scheme accessible only after a doctor’s referral.

But campaigners are angry that post-sepsis syndrome and similar long-term complications caused by other critical illnesses, such as pneumonia, are not being given the same consideration.

‘Covid-19 can be very disabling, but post-sepsis syndrome is just as bad,’ says intensive care specialist Dr Ron Daniels, executive director of the UK Sepsis Trust charity. ‘About 40 per cent of survivors of sepsis experience debilitating symptoms for 12 to 18 months after infection, sometimes longer.

‘So why are we offering rehabilitation to survivors of Covid-19 but not equally disabling infections?’

A 2017 analysis by the independent think-tank the York Health Economics Consortium estimated that the UK loses £12.8 billion a year through lost productivity due to the after-effects of sepsis — six times more than expected.

The letter from signatories — including the UK Sepsis Trust, the Faculty of Intensive Care Medicine and the British Association of Critical Care Nurses —warned: ‘Rehabilitation is inconsistent across the country, with many patients left to face these problems alone, without support or information to help them recover. This is not acceptable.’

They have set up a petition calling for every intensive care patient, whatever their illness, to be routinely assessed for lasting health problems, given a rehabilitation plan and have regular meetings with different specialists to make sure they’re on track.

The letter says National Institute for Health and Care Excellence guidance from 2009, setting standards for NHS rehabilitation after critical illness, has not been implemented across the UK. ‘The system is unjust,’ says Dr Daniels. ‘We’re not out to diminish the need for Covid rehabilitation, but it shouldn’t be prioritised.’

He added: ‘The Government claims all sepsis patients are offered follow-up care, but that’s simply not the case. It’s often left to GPs to pick up the pieces. Not only are they terribly busy, they don’t receive much training in post critical illness care.’

Dr Stephen Webb, president of the Intensive Care Society, says ‘tens of thousands’ of those with sepsis do not get the follow-up care they need, with ‘up to half of those with post-sepsis syndrome . . . unable to work a year later’.

Laura’s nightmare was caused by Ludwig’s angina, in which a bacterial infection in gums spread to tissues under the tongue and in the neck. It’s not only life-threatening because it shuts off the airway, but the bacterial infection almost always leads to sepsis.

Convinced her symptoms were not serious, she opted to rest at home. But her parents, with whom she was living, became so concerned they made an emergency GP appointment at which she was told to get an emergency consultation with a dentist.

The dentist said she needed intravenous antibiotics urgently and her parents should drive her to the Royal Sussex County Hospital in Brighton, 12 miles away, rather than wait for an ambulance.

Laura, who is raising awareness of post-sepsis syndrome in her podcast Your Sepsis Stories, says: ‘My blood pressure plummeted. I remember the anaesthetist saying if I had waited for an ambulance it would have been too late.

‘I underwent emergency surgery to remove three infected teeth. When I woke up, I had tubes draining pus out of my neck and for weeks wore dressings that needed changing every five hours.

‘Yet, just two weeks after being discharged, I was back at work.’

But within months, Laura was struggling to cope with the symptoms of post-sepsis syndrome. ‘I started having full-blown panic attacks, which I’d never suffered before, and became really down and crying uncontrollably. My GP has put me on antidepressants.

‘And I get so tired sometimes I have to stop for a two-hour sleep in the car on the way home from work, even though I only live a couple of miles away.

‘It takes me a lot longer to get over infections and I get terrified it will turn into sepsis again, so I’m constantly checking my pulse, blood pressure and temperature.’

Treatments that might make your stomach turn. This week: Snail slime for skin healing

‘The idea came about when it was noticed that workers in a Chilean snail farm saw cuts on their hands heal faster,’ explains Dr Sarah Pitt, a microbiologist at Brighton University.

This led to snail slime being used as a cosmetic treatment, with the slime applied in facials where the snails slithered over the face. Since then, a way of ‘milking’ the snails and purifying the slime has been created. Greek research from 2009, published in the Journal of Dermatological Treatment, showed snail extract helped burns heal faster. ‘However, while we know it can work, we don’t know why,’ says Dr Pitt. One theory is that something in the slime helps cut damage to cells caused by harmful molecules.

The slime also has antimicrobial properties, and fights bacteria called pseudomonas aeruginosa, a major cause of lung infections in cystic fibrosis. The bug is on the World Health Organisation list of those for which alternative treatments are most needed.