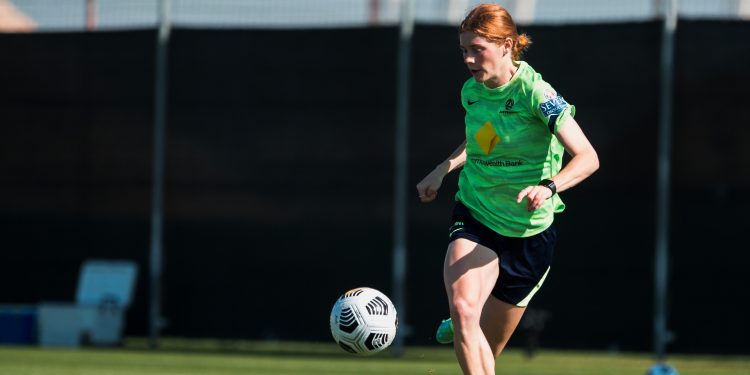 The 23-year-old made her Matildas debut off the bench in the group stage match against Philippines in India, starting the clash with Thailand before again featuring as a substitute in the 1-0 quarter-final defeat to South Korea.

That early exit was far short of what the Australians had expected, but as Vine prepares to return to domestic action with Sydney FC against her former club Newcastle on Sunday she is still coming to terms with the experience of the past few weeks.

“Getting knocked out in quarters was pretty disappointing … but going over there for my first time, my first experience with the Matildas, obviously it’s something you dream about when you’re when you’re younger and it’s been one of my goals to make that squad since I made W-League, so seven years I think,” Vine told the Australian Associated Press.

“It’s still fairly surreal, something I’m still trying to process, that I have made a cap now and I can say I am Matilda because I have gone over and played for them.”

Vine believes the lessons she and Sydney teammate Remy Siemsen will have gained from their national team experience can only help the Sky Blues, as they look to go one better than last year when they claimed the A-League Women premiership but fell to Melbourne Victory in the grand final.

“It’s made us very, very hungry to get the double this year,” she said.

“We were very disappointed with that grand final and I was obviously really upset that I couldn’t play in that or the premiership.

“We want to have clean sheets and be undefeated for the whole season. That’s our goal as a squad.”

Despite losing Vine and Siemsen to the Matildas, Sydney have continued to steamroll through the ALW and go into Sunday’s clash with the Jets eager to extend a record-breaking run of more than 12 hours of football without conceding a goal.

Vine said that defensive solidity only helps her and Sydney’s fellow forwards get their jobs done at the opposite end.

“We alway think about that, like me and Rem were actually just speaking about that today, how safe we feel with our backline behind us,” she said.

“We do feel very secure as a frontline and hopefully we can just keep putting it away and make it easier for them.”


“We call it the golden generation”: Chidiac on the A-League and being a playmaker

The Women’s Game profiles some of the best playmakers and creators in the A-League Women’s. Alex Chidiac used her limited time at Melbourne Victory to make a huge impact. From aviation to agriculture: how do the heavy polluting industries plan to decarbonise? | The invested generation

From aviation to agriculture: how do the heavy polluting industries plan to decarbonise? | The invested generation