It’s Time To Start Taking Me Seriously: Troy Anderson Is Just Getting Started 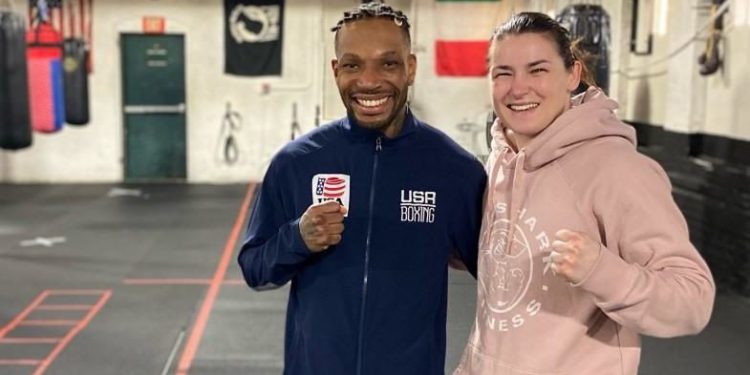 
TROY ANDERSON is on minute 26 of a stationary bike workout, but he doesn’t seem to have broken a sweat as he pedals and describes his game plan for his fourth pro fight outside of Boston on Saturday, February 12.

His dog, a cane corso named Apollo, lies beside him while his girlfriend Meg Kilroe, who Anderson was cheering on at her Golden Gloves debut last weekend, chimes in with encouragement. Another pro boxer he trains with under Team USA Boxing Coach Marc Gargaro at the Nonantum Boxing Club is sparring in the ring in front of him, and it’s clear that even as he talks about his upcoming fight, Anderson is mentally taking notes. Every morning the undefeated featherweight wakes up at 4 a.m. to start his day as a union sheet metal worker with Boston Local 17, and every evening he ends it in the gym. “You’ve gotta want it,” he explains as the bell ending his workout begins to ring.

It’s evident that Anderson does.

A STYLISTICALLY SEAMLESS SOUTHPAW with a strong left hook and the go-to sparring partner for Katie Taylor whenever she’s in Boston, Anderson — now 29 — knows he doesn’t have time to waste.

“There’s a few people who might be bigger than me on social media and that get more recognition than I do, or maybe have more credentials because they’ve been doing it longer,” said Anderson, who first started boxing at 23 and devoted his life to the sport soon thereafter. “But my work ethic and dedication…I just know in my mind that I haven’t reached my full potential. And when I reach it, it’s going to be something crazy.”

His matchup against Mike Fowler on a Vertex Promotions card in Dedham, Massachusetts, will give him his best shot yet at proving his career is just getting started.

“This is a statement fight for me to kick off my boxing career,” Anderson explained. “Like a coming out fight…this is who I really am, and it’s time to start taking me seriously.”

Fowler is a bona fide journeyman. He’s the same age as Anderson, but he has almost 50 more fights under his belt.

“I know he has a lot of experience, but with Marc in my corner,” Anderson said confidently, “I have the tools and the skills that I need to put on a show and showcase my talents.”

Fowler moved to Las Vegas in 2013 to train under Roger Mayweather as a young amateur prospect the same year Anderson first tried on a pair of gloves. Fowler hasn’t racked up many wins as a pro, but his time in the ring with elite boxers like Devin Haney is nothing to laugh at.

“Fowler’s got a lot of experience, so I’m looking for Troy to be able to showcase his skills a little more,” said Ryan Roach, Anderson’s manager.

Ryan Roach has been quietly building a solid roster of fighters.

“In this fight, what I gotta do, I gotta stay sharp more than anything,” Anderson said. “I’m not gonna rush nothing…my patience is going to be key.”

Roach signed Anderson to his Fighter Locker stable last year and the two instantly connected through their mutual Boston roots – roots that Roach says will serve Anderson well on Saturday. “​​He’s got a big crowd, big fanbase in the area, which is huge…they always come out to support him.”

Anderson broke down his path to victory as “being able to blind my opponent and throw combinations off of that while controlling him and limiting his punches. I think I’m faster and sharper than this guy, as opposed to where I see he’s leaving stuff open; he leaves the high guard, which will help me to set up my body shots — what I love to do — and take home the win.”

Can Troy Anderson make some noise in 2022?

Anderson scored early knockouts in his first two fights and won a unanimous decision victory against Bellator MMA contender turned boxer Ron Leon in his third last November, each time relying on his quick front hand to effectively out-box his opponent in the ring.

Roach said, “I’m excited for this fight to go the distance, for him to get the rounds, to get some experience, and then you know we gotta move up from there and get some tougher opponents. I’m just looking to build him right, to get him to that world title stage…I think the opportunity is there for Troy.”

THE FLURRY OF ACTIVITY around Nonantum Boxing Gym, where Anderson grew from a passionate amateur into one of most promising pros fighting out of Boston right now, starts to wane when he prepares to call it a day. As he packs up his things and gets ready to leave the gym, Anderson spends a minute rifling through his bag for something that isn’t there. “It’s alright,” he smiles. “I’ll be back tomorrow.”

‘Celebrity Big Brother’: One Houseguest Willingly Leaves, While Another Gets Eliminated

A Tale of Two Sons is next week’s free Epic Store game • Eurogamer.net

A Tale of Two Sons is next week's free Epic Store game • Eurogamer.net