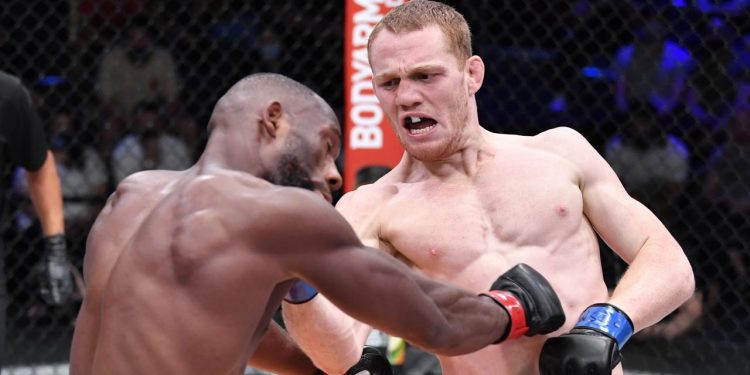 
Australia’s Jack Della Maddalena is ready to confirm his Next Big Thing status at UFC 275 in Singapore – and fill the void left by an injured Robert Whittaker — declaring: “The hype will continue”.

Only a week after Whittaker was forced to withdraw from the Singapore card, UFC officials have thrust 25-year-old Della Maddalena into the biggest test of his career against experienced Dagestani grappler Ramazan Emeev.

The breakout West Australian striker, who is on a tear of 11 straight wins, and in January won his UFC debut by devastating KO, will be one of three rising Aussies on the card – joined by Josh Culibao and Jacob Malkoun.

While the trio are all coming off big wins, undeniably the greatest hype belongs to the Perth slugger who UFC boss Dana White has already branded “special”.

After winning his UFC debut against Pete Rodriguez in under three minutes, the welterweight is now promising another huge showing on the card where Whittaker was supposed to fight Italian Marvin Vettori.

Rather than slowly build his career, Della Maddalena says his goal is to fight three times this year and catapult himself into the division’s top 15 before Christmas.

“I want to climb the ranks as quickly as possible,” he said.

Asked if that meant chasing another KO against Emeev, the Aussie continued: “I’m not going to chase the finish … (but) I do want to beat him up badly.

“Stick and move until this thing is over.

“And even if the fight does go for 15 minutes I feel like my style of fighting, it’s fan friendly.

“I want to get into exchanges and just not get hit

“So finish or not, I think this will be an exciting fight and the hype will continue.”

As part of what will now be a huge card for Aussie fight fans, Sydney’s Culibao will be also making his first appearance in over a year – and after battling a serious case of Covid — against South Korean featherweight Seung Woo Choi.

Doubling as the wrestling coach for reigning NRL premiers Penrith, Malkoun will fight only four days after several of his clients, including Nathan Cleary, appear in Origin I.

Elsewhere on the undercard, Israel Adesanya’s training partner Blood Diamond will also have the opportunity to earn his first UFC victory after losing his hyped Octagon debut in February.

But still the biggest story for Australian fight fans is that of Della Maddalena versus Emeev.

Before that however, the 34-year-old had won nine of 10 previous fights, including his first three straight inside the Octagon.

“And I want to fight that style,” Della Maddalena said of the Dagestani wrestler.

“Because that’s what seems to be the dominant style of fighting at the moment — strong grapplers from Dagestan, where fighting is in their blood.

Quizzed on his rival, the fighter who earned his way into the UFC via Dana White’s Contender Series continued: “When I look at him I think he’s pretty flat-footed, walks in a straight line and tries to get the takedown.

“So that’s a good style for me.

“I think I’ll be able to move and damage him.

“But he’s definitely a good fighter. Toughest fight of my career.

“So I’ll need to stick and move.

“Don’t be in front of him too long.

“If he wants to shoot a takedown, I need to make him work hard. Then damage him as he’s hanging onto the legs.”

Could China influence Twitter if Musk succeeds in buying the social-media platform? It would not be easy. Here’s why.

Could China influence Twitter if Musk succeeds in buying the social-media platform? It would not be easy. Here’s why.