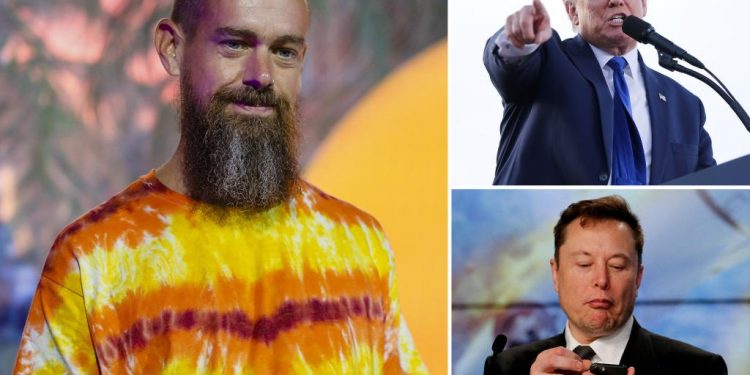 Twitter co-founder Jack Dorsey has admitted that he should never have allowed then-President Donald Trump to be banned from his social media giant.

The tech titan conceded Tuesday it was the wrong move after Elon Musk, Twitter’s presumptive new owner, said he would reinstate Trump’s account and that Dorsey agreed that there shouldn’t be permanent bans.

“I do agree,” tweeted Dorsey, who was still at the helm when Trump was banned in January 2021 at the end of his presidency.

He said there “are exceptions,” listing sexual exploitation of children, illegal behavior or network manipulation.

“But generally permanent bans are a failure of ours and don’t work,” he said.

Dorsey also said he agreed with another user who tweeted that it’s “short-sighted’ for “a handful of social media companies” to act as “gatekeepers to political discourse.”

“It was a business decision, it shouldn’t have been,” Dorsey wrote of Trump’s ban, saying he believes that “permanent bans of individuals are directionally wrong.”

He also replied to another comment about Trump’s ban that “businesses should not be making these decisions.”

“I’m saying a corporation should not have to make this decision in the first place. [N]ot for something as important as public conversation,” Dorsey wrote.

His argument received widespread support, with many saying he should have realized the error while still at the head of the company.

Dorsey quickly dismissed one critic of his new theory who asked why it was “so wrong” to ban someone from a social media platform when people are commonly banned from gathering places “like a bar or a ballpark.”

The Twitter co-founder, who stepped down as CEO last year, has endorsed Musk’s imminent purchase of the company, saying the world’s richest man is a “singular solution” for the San Francisco-based firm.

Despite Musk’s vow to reinstate Trump’s account, the 45th president has said he won’t return, instead touting his own social media platform, Truth Social — which Musk wittily said should have been named “Trumpet.”

Luna Nosedives Under $2, Loses 98% Of Its Value As TerraUSD Struggles To Regain Its Dollar Peg – Forbes

Luna Nosedives Under $2, Loses 98% Of Its Value As TerraUSD Struggles To Regain Its Dollar Peg - Forbes