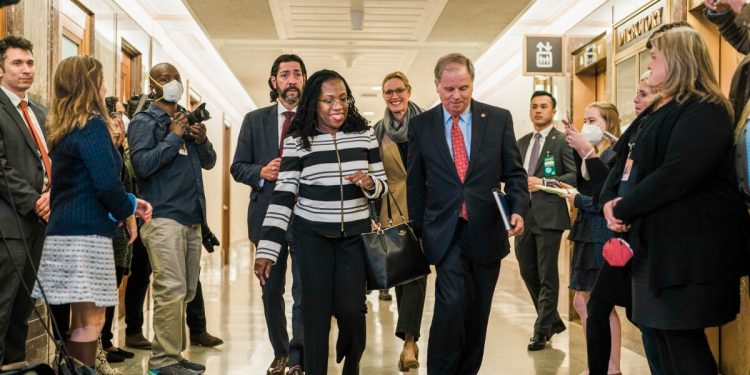 When Judge Ketanji Brown Jackson sits before the Senate Judiciary Committee on Monday to kick off her Supreme Court confirmation hearings, Democrats and civil rights advocates want her to know — and see — they’re behind her.

They’ll start by filling the room with a sea of supporters. But they’ll also dispatch allies to speak out about Jackson’s qualifications and counter her Republican critics across the airwaves and social media.

“We definitely need to pack the room,” Rep. Cori Bush (D-Mo.) said. But she added: “We need to be outside. We need to be sharing information on social media. We need to be speaking out against the lies and the misinformation that’ll come from those right-wing folks that don’t want to see her confirmed.”

Jackson’s hearings will begin Monday morning with opening statements from Jackson and Judiciary Committee members. On Tuesday and Wednesday, each of the panel’s 22 members — evenly divided between Democrats and Republicans — will have up to 50 minutes to question her.

The NAACP and a coalition of 187 organizations sent separate letters in recent days expressing support for Jackson’s confirmation, building on a wide-ranging and bipartisan group of leaders who have endorsed her.

Organizations led by Black women are planning to host a rally Monday morning outside the Supreme Court, which sits across from the Capitol. The Black Women’s Leadership Collective will stream the hearings on its website to create an online community for Black women to watch the historic proceeding together and offer real-time analysis.

“It’s not just to be out there visibly cheering her on and wishing her well, but also being ready to directly respond to what we expect” to be “misogynistic, anti-woman [and] anti-Black comments,” Rep. Ilhan Omar (D-Minn.) said. “It’s not ‘if.’ It’s ‘when.’ And I think you’ll be surprised by how coordinated some of those responses will be.”

Rep. Joyce Beatty (D-Ohio), who chairs the Congressional Black Caucus, described its role as being “the wind beneath her wings.” The group has set up a war room for the confirmation and other issues, but has declined to provide details about what it plans to do.

Senate Republicans have largely stopped talking about race or gender in regard to the nomination since three of their own — Ted Cruz of Texas, Roger Wicker of Mississippi and John Kennedy of Louisiana — were criticized weeks ago for their rhetoric around President Biden’s pledge to nominate a Black woman.

On Thursday, Senate Minority Leader Mitch McConnell (R-Ky.) signaled what may be an alternative GOP attack strategy, questioning the empathy Democrats say she would bring to the bench due to her previous work as a federal public defender.

“Her supporters look at her resume and deduce a special empathy for criminals. I guess that means that government prosecutors and innocent crime victims start each trial at a disadvantage,” McConnell said on the Senate floor.

“Are we saying that they are not people that should have representation?” she asked. “I absolutely, like, totally, 100%, unequivocally disagree with him.”

“We will be promoting her swift confirmation via the press on national news in English and Spanish, radio, and social media in order to continue to draw attention to her impeccable life experience and professional accolades that make her overqualified and very much suitable to be our Supreme Court justice,” said Rep. Raul Ruiz (D-Coachella), chairman of the Hispanic Caucus.

UltraViolet, a women’s rights advocacy group, is relaunching its Women’s Disinformation Defense Project to counter racist and sexist narratives in mainstream and social media. The project started in 2020 as a coalition of progressive groups that sought to head off unfounded attacks against Kamala Harris ahead of her selection as Biden’s running mate.

At the time, they fought narratives that Harris, the first Black woman and Asian American to be vice president, wasn’t qualified, and quickly countered attacks that played on racist and sexist stereotypes — including claims by then-President Trump that Harris wasn’t “competent,” and his attempt to amplify the lie that she wasn’t born a U.S. citizen, similar to the falsehoods he had pushed about Barack Obama before and during the first Black president’s administration.

For many Black women, Jackson’s nomination is a landmark achievement rectifying 233 years of exclusion, and her coming confirmation battle a fraught reminder of the challenges and stereotypes women of color face in public forums.

In interviews, several Black female leaders said they hope the process expands how the public perceives Black women in positions of power, and they stand ready to advocate for a fair and timely confirmation.

“I promise you, when [Jackson] takes that seat in October ’22, you’re going to see people feel a certain kind of way,” said Fatima Goss Graves, president and chief executive of the National Women’s Law Center. “I think people will be excited to break this barrier, and I refuse to let those who are trying to resort to an old playbook disrupt my joy in this.”

Democratic leaders and the White House are hoping for a bipartisan vote in the Senate. Jackson was confirmed with Republican support to three previous appointments, including three GOP votes last June to place her on the D.C. appellate court.

But a united Democratic caucus could confirm her without any Republican support by having Harris cast the tie-breaking vote.

But first Jackson and her allies have to get her through this week’s hearings unscathed.

“We’re ready,” Omar said. “This is an opportunity none of us thought would come.”