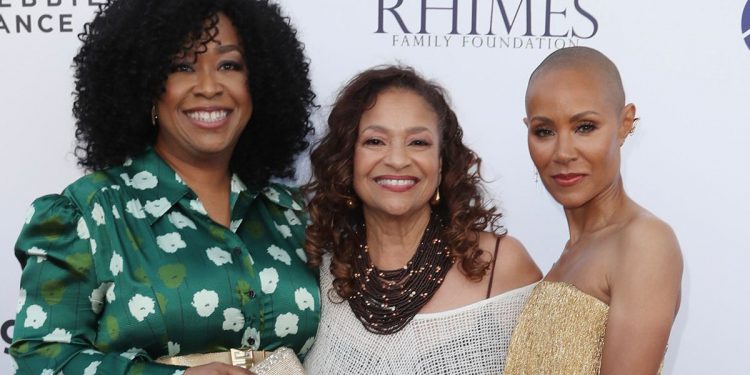 Will Smith and Jada Pinkett Smith pose together at Oscars

Jada Pinkett Smith has been seen for the first time since her husband Will Smith slapped Chris Rock at the Oscars.

The 50-year-old Matrix actress looked incredible in a gold strapless gown as she attended a red carpet event in Los Angeles.

She accessorised her super glam look with gold earrings and a slick of red lipstick.

The Red Table Talk host was there to support Bridgerton producer Shonda Rhimes’ latest project, the opening of The Rhimes Performing Arts Center.

It includes five dance studios for students aged eight and over to train in, with one being named after Jada and Will Smith.

Jada stunned in a strapless gold gown at the LA event
(

Following the fallout from husband Will’s Oscars slap, Jada has so far remained silent on the incident.

The only time she has hinted at any mention of it was when she posted a quote on Instagram at the end of March which simply said: “This is a season for healing and I’m here for it.”

Will has been banned from the Oscars for 10 years after storming on stage and slapping host Chris during a live broadcast.

He erupted out of his seat after the comedian made a joke about Jada’s shaved head hairstyle referring to her as ‘G.I Jane’.

This didn’t go down well with Will, as Jada recently revealed she suffers from the hair loss condition alopecia.

Jada has so far remained silent on the Oscars incident
(

She recalled “crying down the freaking aisle” as she tied the knot with her now husband of 24 years.

And said she only went ahead with the wedding because she was pregnant with her and Will’s oldest child Jaden .

Jada and Will tied the knot in a secret ceremony on New Year’s Day 1997 at the Cloisters, a medieval-style mansion near Baltimore near where Jada grew up.

Despite their big day appearing to go off without a hitch, it was described as “horrible” as Jada was three months pregnant at the time.

Jada confessed: “I was so upset that I had to have a wedding. I was so p****ed. I went crying down the freaking aisle. I cried the whole way.”

Explaining her feelings at the time, the actress added: “I didn’t want to get married and now Gammy’s [her mother] gone running to Will, crying about how I don’t want to have a wedding.

“Now I’m being forced to have a wedding, when really I just wanted it to be the two of us [her and Will] on a mountain.”

But it seems everything worked out alright in the end as Will and Jada are still going strong.

They share son Jaden, 23, and daughter Willow, 21. While Will has an older son, Trey, 29, from his first marriage to actress Sheree Zampino.

How genes in deer antlers could ‘switch off’ deadly tumours

How genes in deer antlers could 'switch off' deadly tumours