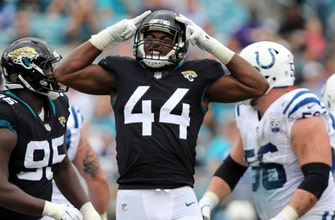 Jack finalized the deal Monday, two days after agreeing to it. The contract includes $33 million guaranteed.

Top executive Tom Coughlin says: “This was something that we wanted to get done because Myles has proven himself to be a key component of our defense. His versatility and durability are both traits that we value on the football field.”

Jack has played in all 48 games in three NFL seasons, totaling 221 tackles, five sacks and an interception. He was one of three guys to play 100% of his team’s defensive snaps in 2018, joining Denver’s Justin Simmons and Philadelphia’s Malcolm Jenkins.

A second-round draft pick out of UCLA in 2016, Jack was entering the final year of his rookie deal. His base salary in 2019 is $1,313,787, but his new deal makes him the NFL’s third-highest paid inside linebacker — behind Seattle’s Bobby Wagner and the New York Jets‘ C.J. Mosley.

The extension is expected to give Jacksonville team flexibility with its franchise tag in 2020, eliminating the possibility of having to choose between tagging Jack and Yannick Ngakoue.