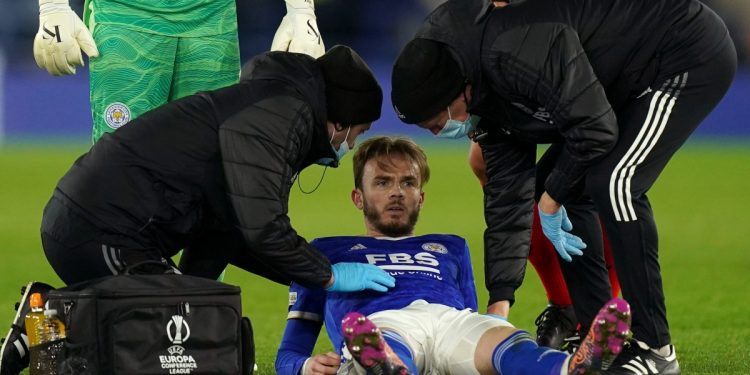 
JAMES MADDISON lasted just 18 minutes of Leicester’s European tie on Thursday night before being withdrawn in a worrying incident.

The English midfielder, 25, went to ground during a break in play in the 4-1 Europa Conference League win over Randers.

Maddison came on in the 64th minute for Wilfred Ndidi but was withdrawn in the 83rd.

He hit the deck and team doctors rushed to attend to him at King Power Stadium as Hamza Choudhury came on in his place.

BT Sport commentator Ian Darke confirmed that Maddison headed straight to the medical room for further checks after being taken off.

The Foxes boss said: “He wasn’t feeling well so we took him off. He is in with the medics and he feels fine.

“He just felt a bit funny in the game. We didn’t want to put any risk with that.

“He didn’t feel well so we took him off. He went in to see the doctors but I have just spoken to him.

“He was sat up, he felt a little unwell in the game and a little faint but he is OK.”

Rodgers was asked if Maddison had collapsed on the field but insisted: “No no, he just felt unwell so we took him off.”

And he added that taking the players’ pulse was merely a precaution.

“It’s something they do just to see how he is feeling,” he said.

“I don’t know exactly what happened other than he felt ill, I’ll find out tomorrow.”

Leicester eventually ran out comfortable winners in the first leg of their Europa Conference League tie against the Danish side after turning on the style in the second half.

Rodgers added: “Their goal was a reminder that is you make any mistakes, no matter how dominant you are, you can be punished.

“Teams at this level can hurt you. It was about keeping calm and keeping our football flowing, creating and taking chances.

“Our goal for the remainder of the season is to finish as high as we can in the league, to keep developing, improving and to get players back.

“We want to finish as string as we can and bring that into the following season.

“In this competition, everyone is in it to win it and we are no different.”