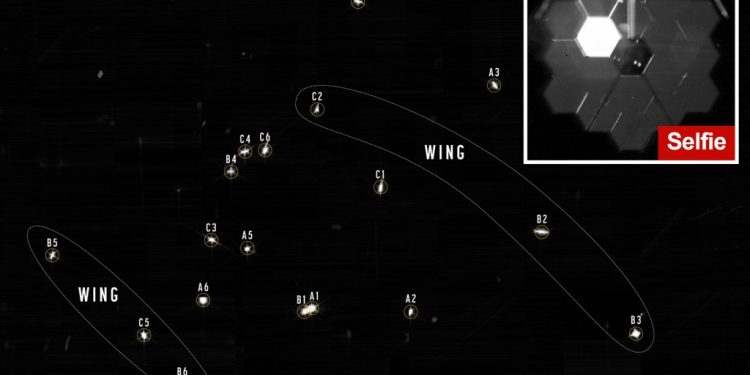 
The James Webb Space Telescope has taken its first images, including a “selfie.”

A mosaic image with more than 2 billion pixels helped the Webb team to determine that Webb’s Near Infrared Camera (NIRCam) instrument can collect light from celestial objects.

The objective was to identify starlight from the same star in each of the telescope’s 18 primary mirror segments.

The result showed 18 randomly organized dots of starlight, which are the product of Webb’s unaligned mirror segments all reflecting light from the same star back at Webb’s secondary mirror and into NIRCam’s detectors.

The Webb team chose a bright, isolated star called HD 84406 and Webb was repointed to 156 positions around the star’s predicted location, generating 1,560 images with NIRCam’s 10 detectors over a period of nearly 25 hours. That amounted to 54 gigabytes of raw data.

The initial search covered an area about the size of the full moon and light was found from all 18 segments very near the center.

“This initial search covered an area about the size of the full moon because the segment dots could potentially have been that spread out on the sky,” Marshall Perrin, deputy telescope scientist for Webb and astronomer at the Space Telescope Science Institute, said in a statement.”Taking so much data right on the first day required all of Webb’s science operations and data processing systems here on Earth working smoothly with the observatory in space right from the start. And we found light from all 18 segments very near the center early in that search! This is a great starting point for mirror alignment.”

NASA has labeled which dot corresponds to which mirror segment, including those taken by the segments on Webb’s mirror wings.

“Right now, as Webb is still getting into focus, you can think of Webb as an 18-eyed creature looking in 18 separate directions. A larger dot indicates that the segment is less focused than a smaller dot. A flatter, pancake-like dot indicates that a segment may be tilted,” the NASA Webb team explained on Twitter.

In the next month or so, the team will gradually adjust the mirror segments until they become a single star.

NIRCam will be used throughout almost the entire, months-long alignment of the telescope’s mirrors, but the agency noted that the instrument is operating “far above its ideal temperature” and visual artifacts can be seen in the mosaic.

The impact of these artifacts, it said, would lessen significantly as Webb draws closer to its ideal cryogenic operating temperatures.

Moving forward, Webb’s images are expected to become clearer, with more detail as the telescope’s other three instruments arrive at their intended cryogenic operating temperatures and begin capturing data.

The first scientific images are expected over the summer.

“Launching Webb to space was of course an exciting event, but for scientists and optical engineers, this is a pinnacle moment, when light from a star is successfully making its way through the system down onto a detector,” Michael McElwain, Webb observatory project scientist, said.

Boy, 14, charged with manslaughter over fatal car crash in Cairns

Boy, 14, charged with manslaughter over fatal car crash in Cairns