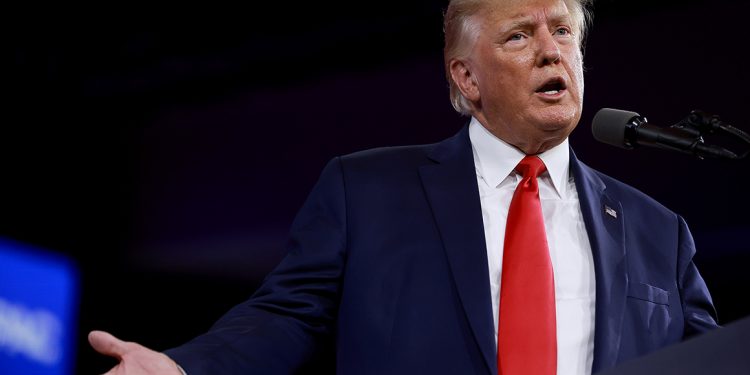 Characterizing excerpts of nearly a dozen depositions from top aides to Trump and former Vice President Mike Pence, the committee described a president who had been informed repeatedly that he lost the election and that his claims of fraud were unfounded — only to reject them and continue to mislead the American public.

He then pushed top advisers to continue strategizing ways to overturn the election results.

The panel released its findings as part of a legal push to force John Eastman, an attorney who was a key driver of Trump’s strategy to subvert the 2020 election, to produce crucial emails tying together elements of the scheme they described.

A deposition of Eastman himself reveals that the Trump ally invoked his Fifth Amendment right against self-incrimination nearly 150 times in declining to answer the committee’s questions.

Other documents include a page from Trump’s private Jan. 6 schedule, released to the Jan. 6 select committee by the National Archives in recent weeks. The schedule includes an 11:20 a.m. call with Pence, as well as a call with then-Sen. Kelly Loeffler (R-Ga.).

Although the evidence offers insight into the contours of what is likely to be the committee’s final report, it is only a small window into the 650-plus interviews the panel has conducted.

The committee suggests Trump and some of his allies may have committed three distinct crimes: Obstruction of an official proceeding — in this case, Congress’ Jan 6 session to count electoral votes — defrauding the United States by interfering in the election certification and spreading false information about the results, and a violation of the District of Columbia’s common fraud law. Aides to Trump and an attorney for Eastman did not respond to requests for comment.

To prove Trump committed felony obstruction, investigators would have to show he “corruptly” intended to impede an official proceeding — and the committee says his work with Eastman to pressure Pence to take illegal acts could satisfy this requirement, particularly as Trump continued to spread claims of fraud that his own allies said were unfounded.

Determining whether Trump violated criminal law on Jan. 6 is a complex undertaking, though the panel’s findings may drive up pressure on the Justice Department to reveal its own thinking on the matter. Prosecutors have charged hundreds of Trump supporters who breached the Capitol with seeking to obstruct Congress’ effort to count electoral votes, but applying that law to the former president presents a trickier calculus.

The panel says the evidence supports an “inference” that Trump knew he had lost the election — Miller described a blunt conversation with Trump in which campaign aides told him he had lost — “but the President nevertheless sought to use the Vice President to manipulate the results in his favor.”

The bulk of the committee’s legal filing focused on reconstructing Eastman’s efforts to justify ordering Pence to overturn the election single-handedly when he presided over Congress’ electoral-vote-counting session on Jan. 6, 2021.

Eastman, however, didn’t relent even after a violent mob — egged on by Trump — stormed the Capitol and sent Pence and Congress fleeing for safety. Eastman continued to press Pence to overturn the election.

“Thanks to your bullshit, we are now under siege,” Jacob, Pence’s counsel, emailed Eastman, along with a lengthy refutation of his argument.

“The ‘siege’ is because YOU and your boss did not do what was necessary to allow this to be aired in a public way so the American people can see for themselves what happened,” Eastman replied, according to emails obtained by the panel.

Jacob subsequently apologized for his language, attributing it to the stress of being moved to a safe location while his wife and three children were watching the news and he was fearing for his safety.

Even after this exchange, Eastman made one final plea to convince Pence to stop the counting of electoral votes, acknowledging it would amount to a “relatively minor” violation of the federal law known as the Electoral Count Act.

“Plaintiff knew what he was proposing would violate the law, but he nonetheless urged the Vice President to take those actions,” the committee wrote in its filings.

Chair Bennie Thompson (D-Miss.) and Vice Chair Liz Cheney (R-Wyo.) said in a statement later Wednesday that their fact-finding strongly suggested: “Dr. Eastman’s emails may show that he helped Donald Trump advance a corrupt scheme to obstruct the counting of electoral college ballots and a conspiracy to impede the transfer of power.”

The select committee revealed its evidence as part of a bid to convince a federal judge to require Eastman to provide more of his own emails — held by his former employer Chapman University — to congressional investigators. Eastman sued to block the panel from accessing his Chapman emails, claiming they would reveal records protected by attorney-client privilege.

But the panel’s emphasis on potential crimes may convince U.S. District Court Judge David Carter — who has repeatedly ruled against Eastman — that none of Eastman’s records are protected by privilege.

Carter, who is based in California, has rejected Eastman’s attempts to shield his records, citing the urgency and significance of the select committee’s work. Instead, Carter has ordered Eastman to quickly review 90,000 pages of emails and attachments and to itemize any he thinks should be withheld because of attorney-client privilege. He has repeatedly sided with the committee’s demands, such as requiring Eastman to prioritize emails sent between Jan. 4 and Jan. 7, 2021, and to force him to disclose his legal relationship with Trump, which had never been publicly revealed.

But the committee indicated that Eastman’s purported relationship with Trump fails to prove he had a legitimate claim of attorney client privilege.

Eastman, according to the panel, produced a letter identifying his client as Trump’s campaign, but the letter was left unsigned. “This unsigned and unauthenticated engagement letter is insufficient to establish an attorney-client relationship during the period at issue,” the House’s lawyers wrote.

Returnal Developer Housemarque Is Working On A New IP