Jan 6 hearings day 5: Trump told DOJ to call election corrupt and ‘leave the rest to me’ 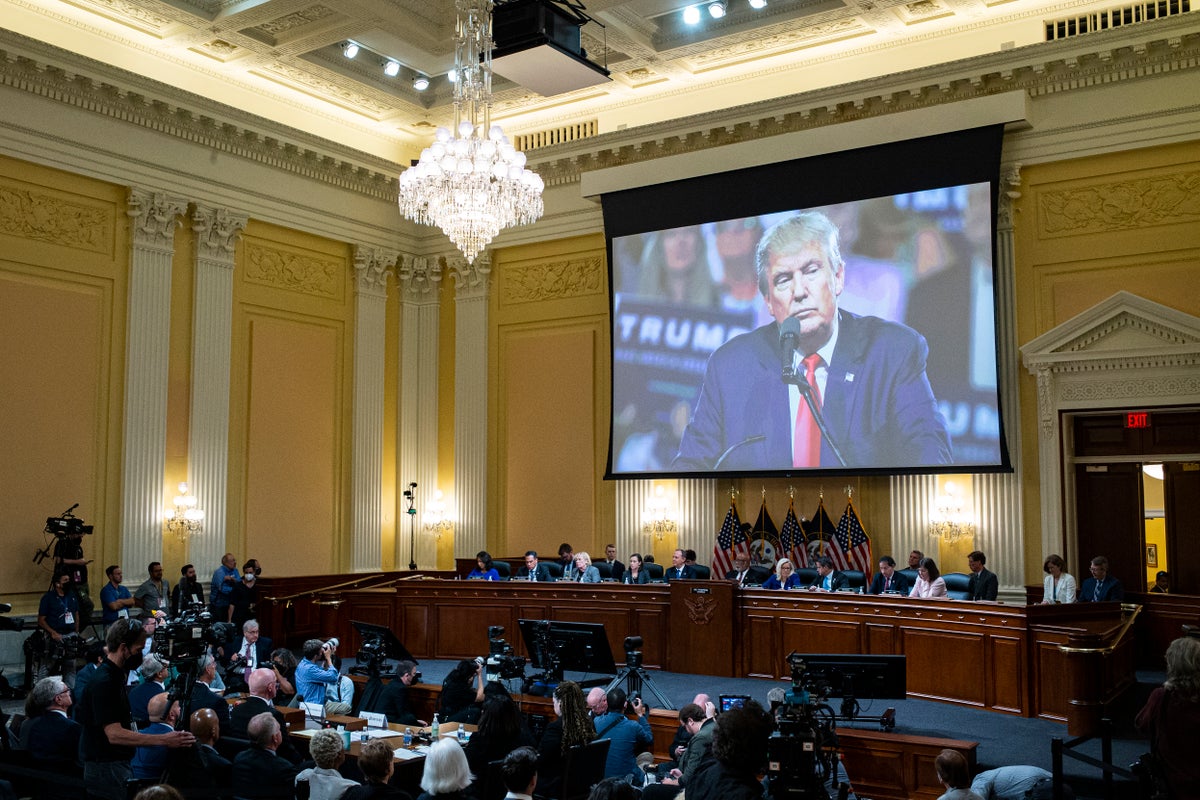 Thursday’s January 6 hearings have taken an in-depth look at how Donald Trump and his allies put extreme pressure on the Justice Department to help overturn the 2020 election.

Former acting deputy Attorney General Richard Donoghue told the committee that Mr Trump instructed him personally to say that the election was “corrupt,” and that he would use that as the impetus for Congress to act and refuse to certify the results.

“Just say it was corrupt and leave the rest to me and the Republican congressmen,” Donald Trump said, in words read aloud by Jan 6 committee member Adam Kinzinger.

Even after being repeatedly brief by DOJ officials that his election claims were meritless, Mr Trump still said he considered supporters who rioted at the Capitol “smart” because of their views the presidential contest was stolen. “They were angry from the standpoint of what happened in the election,” Mr Trump told filmmaker Alex Holder. “Because they’re smart, and they see and they saw what happened, and I believe that that was a big part of what happened on January 6.”

Meanwhile, the panel is in the process of securing the cooperation of longtime right-wing activist Ginni Thomas, wife of Supreme Court Justice Clarence Thomas, and is in the process of schedule further hearings, as the FBI searches targets across the country in its continued investigation into those who attempted to overturn the 2020 election.

Sean Penn sat with Capitol Police officers injured in the January 6 riots during Thursday’s hearing into the insurrection.

The Academy Award-winner and celebrity activist chatted and joked with Michael Fanone, now a CNN contributor, and shook hands with other officers.

“I think we all saw what happened on January 6 and now we’re looking to see if justice comes on the other side of it.”

Bevan Hurley has the story.

During a late December meeting with Richard Donoghue, the former acting deputy attorney general, and other DOJ officials, Donald Trump threatened the government lawyers with firing because they wouldn’t seize voting machines and declare that they were suspicious of the 2020 election results.

“Towards the end of the meeting the president again was getting very agitated. He said, ‘People tell me I should just get rid of both of you,’” Mr Donoghue testified on Thursday.

The president then said he was thinking of elevating Jeffrey Clark, a DOJ official who was circulating plans to have the Justice Department declare state election results suspect and encourage legislatures to send pro-Trump electors.

“Maybe something will finally get done,” Mr Trump said, according to the testimony.

Is this Trump’s Nixon moment?

Some are comparing Donald Trump and his allies’ efforts to get the Department of Justice to serve his political aims during a scandal to that of President Nixon’s infamous attempts to cover up the Watergate crisis.

As Maggie Haberman of The New York Times wrote on social media on Thursday, “Comparing Trump to Nixon has always been imperfect for a variety of reasons, but never have the parallels been as clear as during a hearing in which two top former DOJ officials testified about Trump wanting to use the department for strictly partisan political purposes.”

Trump told DOJ to say election was corrupt and ‘leave the rest to me’ and GOP, Jan 6 hearing told

Top officials at the Justice Department testified on Thursday that then-President Donald Trump put enormous pressure on them in near-daily phone calls and statements demanding that they declare the results of the 2020 election fraudulent with zero evidence.

Former acting deputy Attorney General Richard Donoghue told the committee that Mr Trump instructed him personally to say that the election was “corrupt”, and that he would use that as the impetus for Congress to act and refuse to certify the results.

“Just say it was corrupt and leave the rest to me and the Republican congressmen,” Donald Trump said, in words read aloud by Jan 6 committee member Adam Kinzinger, who then asked: “That’s a direct quote from President Trump, correct?”

The committee is rolling out extensive evidence of how Trump allies pressured the Justice Department to elevate Jeffrey Clark, a mid-level official attempting to get the DOJ to cast doubt on the legitimacy of the election results.

They showed December text messages from US representative Scott Perry, who texted Trump White House chief of staff Mark Meadows that “we gotta get going” with plans about challenging the election and elevating Mr Clark to a high level position.

“I got it. I think I understand,” Mr Meadows replied.

Mr Donoghue said he thought the letter was “extreme” and highly innappropriate, given the lack of evidence about election irregularities in the state.

“This is a grave step for the Department to take and could have tremendous constitutional, political and social ramifications for the country,” Mr Donoghue’s response read.

“This was not based on fact,” the former DOJ official added during his testimony on Thursday. “It was actually contrary to the facts.”

“It may very well have spiralled us into a constitutional crisis,” he added.

Today’s hearings have focused on the role of the Justice Department as Donald Trump and his allies pressured officials to overturn the election.

A key figure in that effort was Jeffrey Clark, a DOJ environmental lawyer who hoped to use the department to legitimise Mr Trump’s false claims about the election and encourage states to send separate, illegitimate sets of electors for the former president.

Former acting deputy attorney general Richard Donoghue told the January 6 committee he thought Mr Clark was not qualified to weigh in on such matters. “I made the point that Jeff Clark is not even competent to serve as the Attorney General. He’s never been a criminal attorney. He’s never conducted a criminal investigation in his life,” Mr Donoghue told the committee, adding, “How about you go back to your office. and we’ll call you when there’s an oil spill.”

Mr Pence, who ultimately did not invoke the 25th amendment, appears nonplussed in the footage.

Here’s why the rare gem, Benitoite, can be more expensive than diamonds