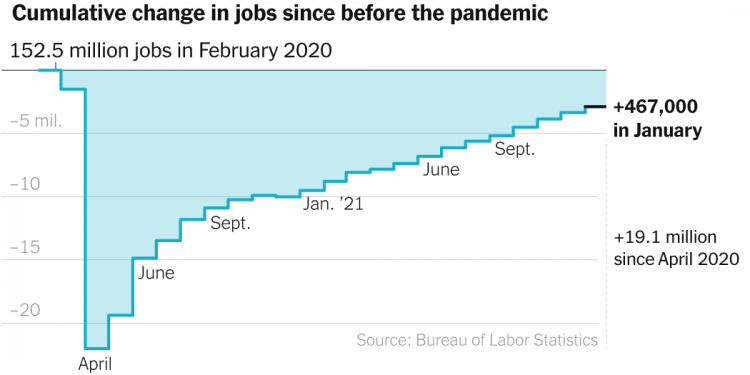 January’s surprisingly strong job gains and wage growth handed the White House a win to talk about at a moment when consumers are unsure about the economy, and will likely make it easier for the Federal Reserve to explain why it is poised to raise interest rates.

But those big numbers could also stoke fears that economic policymakers have an even more urgent inflation problem on their hands, and will fuel Wall Street speculation that the Fed could go bigger and faster in removing its economic help in a bid to choke off price pressures.

Hiring surprised forecasters, as employers added 467,000 jobs instead of the lackluster 125,000 that analysts had expected amid the virus surge. Unemployment ticked up, but wage growth came in very strong — average hourly earnings were 5.7 percent higher than a year earlier, a full percentage point faster than economists had expected.

President Biden and his advisers are pointing to the strong data as evidence that his administration’s economic policies are working. Pay gains are robust, workers are finding opportunities and labor has power in today’s job market. Revisions to last year’s job numbers showed that progress was even faster than previously reported.

Last year “was the greatest year of job creation under any president in history,” Mr. Biden posted on Twitter following the report, while also celebrating the big January gain.

But the fact that wages are surging so quickly could also increase fears that companies will lift prices to cover their rising labor costs, exacerbating inflation. A key economic report next week is expected to show that the Consumer Price Index increased by 7.3 percent in the year through January, based on Bloomberg forecasts.

That is likely to turn all eyes toward the Fed. Jerome H. Powell, the Fed chair, and his colleagues are poised to raise interest rates for the first time since 2018 at their next meeting in March, a move meant to cool off the economy as inflation runs at its fastest pace in nearly 40 years. Officials had expected to find themselves in the uncomfortable position of making that move, and signaling what comes next, at a time when the latest job market data looked a little bleak. Instead, they will be doing it at a moment when both price gains and wage growth appear heady.

Still, it may be difficult to derive a clear signal from Friday’s job numbers, because they were likely susceptible to quirks. The pandemic has roiled every aspect of hiring, and labor market tightness may have stopped employers from making their usual post-holiday layoffs, messing with seasonal adjustments to the figures.

The Fed will have to try to maneuver through the weirdness in the data as virus flare-ups make economic forecasting a field of nonstop surprise.

“We’re going to be led by the incoming data and the evolving outlook, which we’ll try to communicate as clearly as possible, moving steadily” and transparently, he added.

Wall Street economists and investors took Friday’s data as a signal that the central bank may need to remove its support for the economy even more rapidly than it had planned. The wage number in particular was expected to catch policymakers’ attention: Mr. Powell has previously signaled that the central bank would be worried if wage growth exceeded productivity, a sign that it would drive prices higher over time.

“No matter how bullish you are about productivity growth, the Fed can’t live with that pace, if it is sustained,” Ian Shepherdson, chief economist at Pantheon Macroeconomics, wrote following the report.

Other Fed watchers suggested that this might increase the odds of a supersize rate increase in March. The Fed typically raises borrowing costs in quarter-percentage point increments, but some investors have begun to pencil in a coming half-point move.

Friday’s data “will inevitably further fuel expectations of the Fed unleashing a larger” increase in March, Andrew Hunter at Capital Economics wrote in a research note.

Investors on Friday sharply increased their bets that the central bank might make six or seven quarter-point rate increases in 2022, though they were still most heavily betting on five moves this year as of 9:30 a.m.

The Fed’s benchmark interest rate is currently set near zero, and five increases would put it in a range of 1 percent to 1.25 percent by year-end.

The Fed’s biggest problem at the moment is that it is not clear when or how quickly inflation will fade. Used-vehicle prices, which have been a big driver of overall price increases, might be on the cusp of stabilizing but have yet to cool off notably. Gasoline prices are headed back up, food is costing more and rents have been increasing steeply.

With job gains proceeding at pace, keeping the economy on track to satisfy central bankers’ maximum employment goal, Fed officials will be able to more narrowly focus on preventing an economic overheating. They are trying to make sure that they do not fall behind the curve on high inflation, allowing it to become so locked into consumer and business expectations that it becomes a permanent feature of the economic landscape.

How the Fed strikes the balance — and how much it slows down the economy with its rate increases this year — could have important political implications, too. Voters are already glum about the economy’s prospects, and President Biden is suffering in the polls.

Economists have been expecting economic growth to moderate in 2022, as government pandemic supports fade and the Fed pulls back its help. The fact that momentum is holding up in spite of Omicron, and that revisions released Friday showed even stronger job growth late last year than first reported, offers the White House good news to seize on.