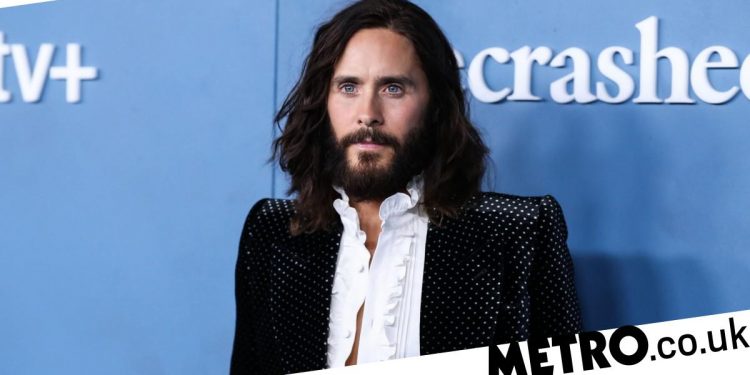 
Jared Leto has insisted people should be ‘thankful’ for Marvel movies.

The 50-year-old actor recently caused a stir when he claimed the comic
book blockbusters were the only thing keeping cinemas open, leading to
other films being shut out.

The WeCrashed star had caused a stir with his original remarks, saying: ‘If it wasn’t for Marvel films, I don’t even know if theatres would exist. It doesn’t seem like there’s room for everyone, and that starts to become a little heartbreaking.

‘I also have gratitude for these movies because they’re keeping cinema
alive.’

While he paid no attention to the debate sparked by his remarks, he still stands by what he said and insisted he actually thinks it is a good thing.

He said: ‘I pretty much just bury my head in the sand, say a lot of stupid s*** and then let everybody go have fun with it.

‘But I would say it again. I mean, are people upset with it? Do they agree with it? What are they, confused about it?’

‘If you look at the box office and what people are buying tickets for, I worked at movie theatre as a kid, ok, and I’m talking about what’s actually generating revenue to keep the buildings open and the people employed and the ecosystem thriving,’ he added.

Jared branded Marvel movies ‘probably the biggest generators of revenue’ and said ‘in a sense, we should be thankful.’

‘Especially those of us who are big fans of cinema and theatres, we should be thankful that these films even exist. Because they help support the ecosystem, so that other films that are adult dramas, like House of Gucci, have theatres they can actually be in. That’s my point.’

He agreed his point could have got ‘lost in translation,’ but he thinks ‘it’s pretty hard to argue with.’

Jared labelled cinema a ‘sacred’ and ‘beautiful’ thing that ‘changed his life.’

Several big names have expressed their dislike for Marvel and superhero films in the past, one being Emily Blunt.

In a Howard Stern interview, the Quiet Place actress said comic book films are ‘not up my alley.’

‘I don’t like them. I really don’t. It’s been exhausted. We are inundated — it’s not only all the movies, it’s the endless TV shows as well. In general, I don’t race to see superhero movies,’ she said.

‘They leave me feeling a bit cold, I can’t explain it.’

Cillian Murphy also believes the superhero genre has now run its course, following his role in the Dark Knight trilogy.

‘Have they exhausted every single comic book ever?’ he told Vulture.

‘I don’t know where they’re coming from anymore. It was a different time back when we made Batman Begins.’

The Peaky Blinders actor said he liked Christopher Nolan’s ‘slightly heightened level of storytelling,’ and while his kids love Marvel films, he doesn’t watch them.

The House of Gucci star can next be seen in his own Marvel movie, Morbius, and he relished the chance to tackle ‘three performances in one’ with the title
role.

Speaking to Entertainment Tonight about the story and his transformation, he said he ‘loves’ that his character, Dr. Michael Morbius, is ‘sick and frail and fragile’ and ‘searching for a cure for a really rare disease,’ which leads to him becoming ‘strong and powerful and ultimately monstrous.’

Jared admitted it was ‘quite an honour’ to be approached for the project, because no one has played the character before and it is a very different movie to anything he’s done in the past.

He added that it’s exciting to know ‘this is the very first time this character has been on the big screen,’ hence why he ‘jumped at the opportunity.’


MORE : Harry Styles and Olivia Wilde loved-up on romantic walk in Soho as they match in casual blue outfits