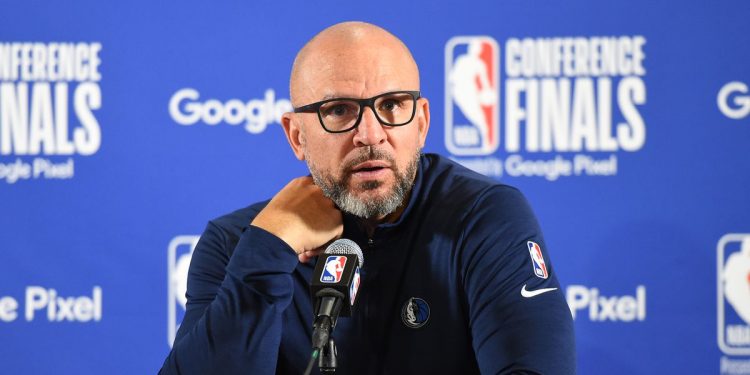 The honeymoon is over. As much well earned respect that Jason Kidd garnered this season in his first year as head coach of the Dallas Mavericks, the tank is running dry. In Game 2 of the Western Conference finals, the Mavericks led by as many as 19 points. That wouldn’t last, as the Golden State Warriors shell shocked the Mavericks.

Everything Dallas did right in the first half evaporated in the second half. It was a tale of two teams as the Mavericks went away from everything that was working for them and fell into the same poor offensive possessions and strategies that tanked them in Game 1.

“We got great looks, but we have to do better,” Mavericks head coach Jason Kidd said. “We have to understand, when we shoot three or four threes in a row and miss, you’ve got to get to the rim and got to get the ball into the paint, got to get to the free-throw line. That’s just understanding the situation, learning, and maybe it is experience.”

It did not have to happen, though. Dallas was cooking in the first half. Luka Doncic and his teammates–namely Jalen Brunson–were getting anything they wanted. They took their man off the dribble, attacked the lane, kicked it to open shooters, and made the offense hum.

Then it stopped. Maybe Dallas mayor Eric Johnson is to blame. He’s a notorious sports jinx. Regardless, Doncic, Brunson, and the rest of the team abandoned what was working. The ball rarely touched the paint, something they’ve built success around, and they settled for pull-up threes. They also started hunting Kevon Looney in pick-and-roll switches, a tactic that bore no fruit in Game 1.

“Yeah, when they switch, the low man is early there,” Doncic said. “So, I think we’ve got to — when I attack the paint, usually there’s two on me or three. So, I’ve got to do a better job kicking it out. For them, we’ve got to be aggressive. I think those things, we’ve got to improve in the next game.”

Doncic poured in 42 points, five rebounds, and eight assists. There’s not much more he can do. But for Kidd and the coaching staff, Game 2 should be a gut check. The players played the game as well as they could, but the game plan dissolved.

When Golden State rattled off a 13-0 run in the first quarter without a Mavericks’ timeout, it was apparent that something bad could happen. Rick Carlisle would have stopped the game so fast. Kidd did not. That was the story of the evening. Golden State rode Kidd’s laissez-faire attitude toward timeouts and built momentum, eventually engulfing Dallas in the third quarter.

“You only have so many timeouts,” Kidd said. “I can’t burn them all in the third. So just understanding we’ve gone through runs. This is a team about runs. Also, this is a great learning experience for a young team to go through to understand what it means to stop a run. Can’t ask the coach to always call a timeout. We believe in one another to be able to execute on the offensive end and get a stop or get a basket and get a stop.

“So, we took timeouts. But just sometimes you’ve got to put the ball in the basket to stop a run.”

If you want to look at where things went wrong for Dallas in Game 2, you must start with coaching and strategy. The Mavericks had everything going for them–until they didn’t. It wasn’t a fluke, and it wasn’t pressure coming from the Warriors. The call came from inside the house. Dallas sunk itself.

The Mavericks have been down 0-2 before in these playoffs. They came back and won their series against a superior Phoenix Suns team after falling in such a hole. They adjusted then and they will have too again. But right now, it is uncertain whether Kidd has more tricks up his sleeve.

“It’s basketball,” Kidd said. “We’re on the road against one of the best teams in the league. It happens. They held serve. We’ve seen this in Phoenix. So now we have to go back and just focus on Game 3 and get ready for Game 3, understanding what’s at stake. We just have to protect home and focus on that first possession.”