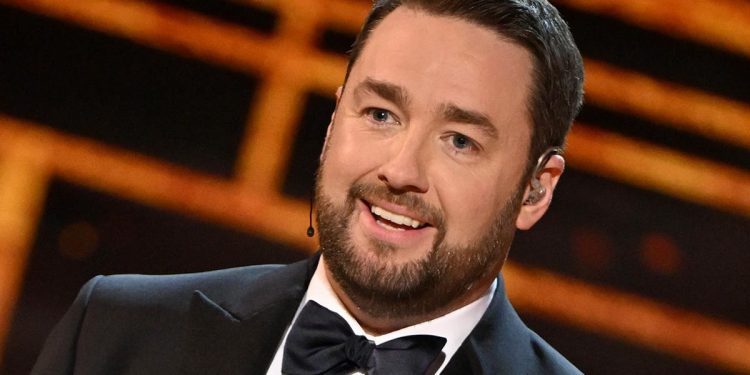 
Jason Manford was less than impressed with Will Smith’s behaviour at the Oscars and branded him a ‘spoiled, narcissistic millionaire’

Jason Manford has admitted he is “a bit shaken” by Will Smith slapping Chris Rock at the Oscars.

The 40-year-old comedian, who recently hosted the Laurence Olivier Awards, made an onstage gag that he planned to “avoid jokes about people’s wives” in future.

He said he “still can’t believe it happened” and questioned the power of Hollywood actors who think that kind of behaviour is acceptable.

Voicing his opinion on ‘slapgate’, Jason told The Sun : “I was shaken a little bit.

“Maybe because I’m a comic and the idea that someone can just come up and slap you in the face and then sit back down and enjoy the rest of the show, get his award and a standing ovation, then go to the after show and have a great time.

“It’s like hang on a bloody minute. That’s pretty impressive – the power of somebody to be able to do that. I think it was a horrendous thing to do.”

As a show host himself, Jason has no time for Will’s antics
(

Will got up and slapped Oscars host Chris after he made a joke about his wife Jada’s shaved head hairstyle.

She rolled her eyes as Chris called her ‘G.I Jane’, apparently not knowing she suffered from the hair loss condition alopecia.

Jason said while it wasn’t a great joke, he doesn’t believe there was any malice behind it.

He admitted that on occasion he had even done it himself and made an inappropriate joke about someone he shouldn’t have.

Branding Will a “spoiled, narcissistic millionaire”, the dad-of-six said there are bigger things going on in the world, adding people who offend too easily should “grow up”.

Fans have recently seen Jason back on the telly as a judge on new ITV series Starstruck.

The talent show sees singers transform into their musical idol for a chance to win an impressive £50,000.

Jason sits on the panel alongside Sheridan Smith, Adam Lambert and Beverley Knight.

It’s no secret the format of the show bears many similarities to much-loved Stars In Their Eyes, which first premiered on ITV in 1990 and was originally hosted by Matthew Kelly.

Explaining how the new show works, Jason said: “So the major differences between the classic Star In Their Eyes is instead of one artist, you’re getting three. So three Elton Johns, three Miley Cyrus ’, three Lady Gagas.

“And they come on in front of us and we get to pick the best team of the night, so it’s sort of like a team game.”

Olly Murs hosts the show. So far, the members of the public have been transformed into a number of music legends including Barbra Streisand, Celine Dion and Diana Ross as well as modern pop stars like Billie Eilish, Harry Styles and even Olly himself.

Olly Murs cringes over his Stars in their Eyes audition as he fears for resurfaced clip
Tags: happenedJasonManfordOscarsshakenslapSmith
Previous Post

The Scientist: A Physician Who Heals Himself and Others

The Scientist: A Physician Who Heals Himself and Others