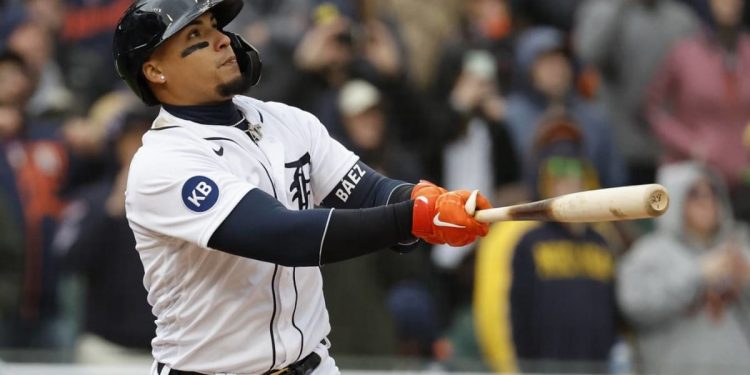 There is no better way for a baseball player to ingratiate himself with a new team than a big Opening Day, and that is exactly what Javier Báez did as the Tigers beat the White Sox, 5–4.

In a tie game, with a man on in the bottom of the ninth, the new Tigers shortstop hit a fly ball deep to right field that A.J. Pollock appeared to bobble, but catch. However, after a replay review, the play was ruled to hit the wall, allowing the winning run to score.

Báez, one of many new faces on Detroit’s team, batted third and went 2-for-5 on the day. Both of his hits came in the 8th and 9th innings as part of the Tigers’s come-from-behind rally victory over the White Sox.

Before the lockout, Báez signed a six-year, $140 million contract with Detroit to take over at shortstop. Earlier in the game, he made a nice play in the hole to introduce fans to his defensive skills.

And after the game, while soaked from a postgame celebration, Báez made a promise to Tigers fans.

“It’s not gonna be easy this year, but it’s gonna be fun,” he told the crowd. “We need your support, Let’s Go Tigers!”

The victory was a great start for the Tigers as the team tries to return to the playoffs. Detroit was down 3–0 to last year’s AL Central champions, but they came from behind to win, getting to Chicago’s strong bullpen.