Jeep Wrangler Rubicon: A tonka truck for the middle-aged combined with a TentBox 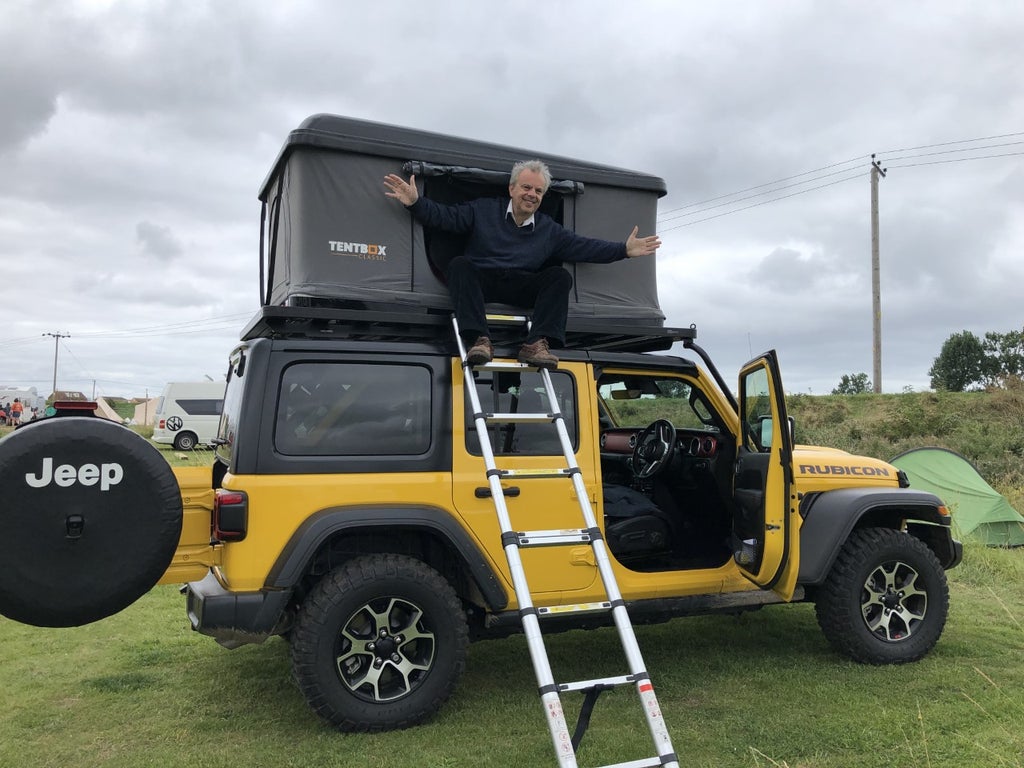 This year I spent my summer holiday sleeping on the roof of a car in a field in Norfolk. This is better than it sounds, I should add, though I’m not sure I’ll ever be fully converted to the cause of campaign, or even glamping. Maybe they should call this kind of thing, staying in a tent on top of a Jeep Wrangler “Jamping” or “Wrangling”. Anyway, it was a very pleasant surprise. My test Jeep Wrangler in “Rubicon” off-road-focused spec and eye-catching “HellaYella” paintwork was supplied with a roof rack and – hurrah! – a TentBox pop-up two-person tent. It was the nearest thing to a holiday I was going to get this year, and it was an excellent set-up. You can buy a TentBox for about £2,000 (which admittedly would pay for quite a few nights in a hotel) and fit it to most cars, but there it was on top of a Jeep and it rather suited it, especially because the TentBox comes with a collapsible ladder for access. It was revelatory.

Unlike a conventional tent, the TentBox is rectangular, has a proper plastic roof, a memory flat foam mattress and extensive insulation as well as four openings and, atop of the Jeep in its caravan park in Heacham, magnificent views of West Norfolk. There are lots of nets and bags around the inside of the tent, pegs to hang lights on and that sort of thing, and it’s all well thought-through. It’s extremely snug and you can get a perfectly good night’s sleep in there, up and far away from any unwanted intruding wildflower, and the only drawback was that the various spare straps made a bit of noise. Easily fixed I should think. Popping the tent up is the work of seconds, as you simply release a couple of buckles and the suspension struts (like on the boot of your car) lever the whole thing up instantly. Getting it down is rather more laborious and requires a bit of brute force, while the sheer height of the Jeep made get the straps all buckled down even more fiddly.

The TentBox certainly was the talk of the campsite, and was admired even by those in the poshest of long wheelbase camper vans, the type with a built-in shower and a three-piece suite, so I suspect the TentBox will become a more familiar site.

As for the Wrangler, well it was what you might expect, only more so. It’s bigger than it looks, feels bulky on the road, doesn’t handle too well, is a bit sluggish, and it’s really a boy’s toy, a Tonka truck for the middle-aged. Given that I was in East Anglia it wasn’t going to get subjected to much hill work and rock climbing, but what little rough terrain it was confronted with, it took in its stride, and off-reloading traditionalists will be reassured that the Jeep has all the mechanical kit needed to cross continents, let alone Norfolk. In normal road use you can just leave it in two-wheel drive, which helps with fuel economy, though the readout on the electronic dash indicated consumption of around 27mpg from the 2-litre petrol engine, and the CO2 emissions, though much improved on previous versions, are so what concerning. The Wrangler also feature a “freedom roof” which means you can turn it into a Targa top semi-convertible, but that for me would have meant removing the tent box and roof rack, and the sun didn’t come out enough to make that faff worthwhile.

The Jeep Wrangler and the TentBox, then, are a marriage made in heaven for enthusiastic campers, but there were three of us in this relationship, and I felt a bit of a gooseberry. I’d prefer a Dacia Duster and a B&B, frankly, because I don’t need to lock my differentials. If you do, then be my guest.