Jeff Bezos space flight: Amazon founder and Blue Origin safely shoots himself off Earth on his own rocket 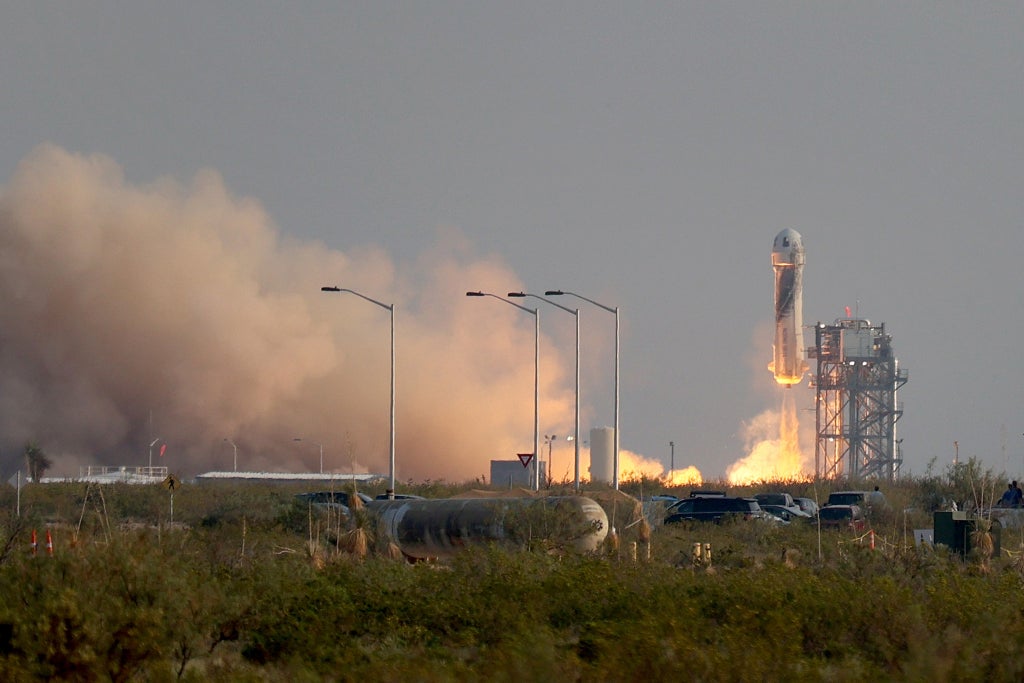 Jeff Bezos has successfully shot himself into space onboard a rocket made by his own Blue Origin private space company.

It is the first time Blue Origin has carried humans to Earth, and Mr Bezos becomes arguably the first ever billionaire to take himself to space.

The Amazon founder – along with his brother Mark, aviation pioneer Wally Funk and 18-year-old Oliver Daemen, whose father bought his ticket – left the Earth onboard the New Shepherd rocket before falling back down to Earth.

At 82, Ms Funk is now the oldest person to have travelled to space, and Mr Daeman is the youngest ever person.

In between, they spent 11 minutes travelling up to space and experiencing a brief moment of weightlessness.

Mr Bezos and the company have suggested that the journey could be a major step for space tourism, research and plans to explore the rest of the solar system.

But critics have argued that billionaires would be better off spending their money to solve problems on Earth. Mr Bezos said such critics were “largely right”, during an interview, but suggested that his trip could help solve those problems.

After the launch the crew could be heard cheering and shouting “woohoo”.

The booster that blasted the group of four into space before separating successfully landed back on Earth shortly after lift-off.

Shortly after the soft landing, a voice that appeared to be that of Jeff Bezos could be heard saying: “Best day ever.”

When asked by mission control how he was, his brother Mark said: “I am unbelievably good.”

MrBezos hugged his parents Jackie and Mike as he exited the cabin.

The four adventurers were greeted with cheers and champagne from family and friends as they returned from their 11-minute trip into space.

Wally Funk thanked the Amazon founder for inviting her aboard New Shepard, after she trained in 1961 but never went to space.

The mission comes days after Sir Richard Branson flew into space on Virgin Galactic, and aimed to reach an altitude of roughly 66 miles (106 kilometres), more than 10 miles (16 kilometres) higher than Sir Richard’s ride on 11 July.

Blue Origin is planning two more flights before the end of the year, with ticket sales now open. On the company’s live feed, commentators encouraged anyone interested to email the company.

The flight coincides with the anniversary of Americans Neil Armstrong and Edwin “Buzz” Aldrin becoming the first humans to walk on the moon, on 20 July 1969. New Shepard is named for Alan Shepard, who in 1961 became the first American in space.