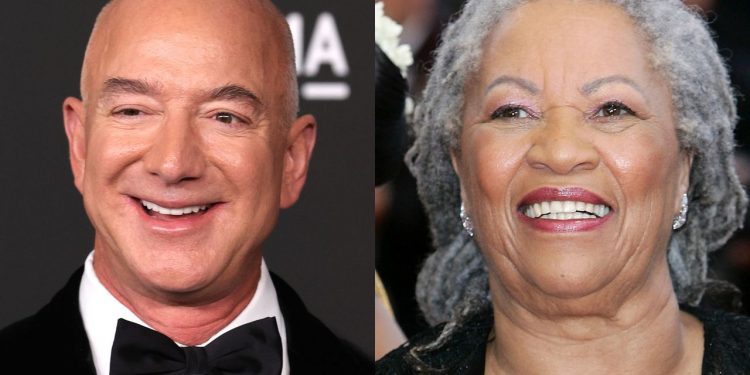 Thanks a lot, but no thanks.

founder Jeff Bezos says he wants the Washington, D.C. public library system to name an auditorium after author Toni Morrison instead of him.

After a public outcry over plans to put Bezos’s name on an auditorium at the system’s Martin Luther King, Jr. Memorial Library in recognition of Bezos’s $2.7 million donation, Bezos contacted the D.C. Public Library Foundation to suggest honoring Morrison instead, the Washington Post first reported.

In an email to the D.C. Public Library Foundation, Bezos said that while he was “honored and grateful” that the library had offered to honor him by christening the auditorium The Bezos Auditorium, he never asked for naming rights in association with the $2.7 million gift, according to a copy of the email reviewed by MarketWatch.

Bezos added that after his donation was announced, “some in the community have suggested a person of color would be more appropriate as a name for the auditorium, especially as it sits inside the Martin Luther King Jr. library. That makes considerable sense to me.”

“‘Some in the community have suggested a person of color would be more appropriate as a name for the auditorium, especially as it sits inside the Martin Luther King Jr. library. That makes considerable sense to me.’”

He continued, “So, I’m writing here to ask if you would consider naming the auditorium the Toni Morrison Auditorium instead of naming it after me. Toni Morrison was a dear friend who I admired greatly. One of my fondest memories is sitting on her porch for hours on a lazy, warm afternoon, eating lunch, sipping vodka, and exchanging stories. At that time, her health was already declining but her mind was as agile as ever, as was her sense of humor. She was a remarkable woman and a legendary, groundbreaking author. I feel she would be a perfect namesake for the auditorium.”

Richard Reyes-Gavilan, executive director of the D.C. Public Library, said library officials were “thrilled” about Bezos’s recommendation. “We could not think of a better individual to be honored in our beautiful new building,” Reyes-Gavilan said in a statement. “We look forward to reaching out to the Morrison family for their support.”

A spokesman for Morrison’s publisher, Alfred A. Knopf, said neither the publisher nor Morrison’s family had a comment on the news. Morrison, who died in 2019, was a Nobel Prize winning novelist and one of the preeminent American writers of the 20th century. Her works include “Beloved” and “The Bluest Eye.”

Bezos’s suggestion to honor Morrison came after a public outcry over the prospect of Bezos’s name being displayed at the MLK library. “To name any part of the MLK Library in honor of Jeff Bezos is disrespectful to the legacy of Dr. King and would also cause hurt and harm to DC’s Black community,” said one online letter campaign against the auditorium naming, the local news website DCist first reported. Opponents said that King stood for equality for all, while Bezos, one of the world’s wealthiest people, represents extreme inequality.

Amazon’s press office and a representative for Bezos did not respond immediately to requests for comment.

Bezos’s name will be displayed at another D.C. institution

News of Bezos suggesting the name change comes as details of another naming rights deal for the billionaire recently came to light. MarketWatch reported exclusively that Bezos’s name will be displayed for at least 50 years on the outside of a new Bezos Learning Center to be built at the National Air and Space Museum. A spokeswoman for the Smithsonian said Monday there had been no requests from the public to change the facility’s name.

Though the library offered Bezos naming rights on the auditorium at its main MLK branch, Bezos’s $2.7 million donation wasn’t directly related to the auditorium. The gift will pay for a literacy program called Beyond the Book. It’s an expansion of the library’s existing Birth to Books program, which distributes free books and holds events for children from birth to 5 years old. Beyond the Book will be aimed at children up to third grade, and could reach an estimated  42,000 children in the District of Columbia, a library spokesman said.

Bezos’s $2.7 million donation was the largest ever received by the D.C. Public Library Foundation, a separate nonprofit that funds programs for adults and children, including readings by authors, at D.C. public libraries. Last year the foundation spent a total of nearly $400,000 on those programs, a spokeswoman said.

“I’m hoping this will stand as a turning point on norms regarding naming rights,” wrote philanthropy historian Ben Soskis on Twitter
TWTR,
,
referring to Bezos’s suggestion to use Morrison’s name. He added that an institution’s name, especially a public one, is a public asset. “It should not be determined by a donor & beneficiary institutions should stop offering it as a carrot,” Soskis said, noting that in this case, Bezos has said it wasn’t his idea to name the auditorium after himself.

This is not the first time a Bezos donation could create a public space named after somebody else. When Bezos donated $100 million to the Obama Foundation in 2021, his gift stipulated that a plaza outside the Obama Presidential Center in Chicago carry the name of Congressman John Lewis, the civil-rights icon.

Toni Morrison’s name has come up in relation to Bezos-adjacent philanthropy before. When Bezos’s former wife, MacKenzie Scott, donated $50 million to Prairie View A&M University, a historically black university in Texas, she told officials she didn’t want the school to name anything after her in recognition of the donation, so the school created a Toni Morrison writing program instead, the Associated Press reported. Scott, a novelist, was a student of Morrison’s at Princeton University and worked as a research assistant for Morrison on her 1992 novel “Jazz,” according to the AP.

A $50 donation will pay for a name to be displayed at D.C. Public Library

You don’t have to be a billionaire to get someone’s name displayed at the D.C. public library. For $50, the library will add a person’s name to the Dream Makers Wall, a glass wall on the fifth floor of the newly renovated MLK branch. The wall was created so members of the public could honor people such as teachers, coaches, school principals or parents who’ve helped them achieve their dreams, said a foundation spokeswoman. One person donated in honor of her father, the first Black library manager in Washington, D.C., a library spokesman said.

“The Dream Makers wall represents an excellent opportunity for donors at all levels to make a donation to the library and to have someone who’s been a hero in their life memorialized,” said foundation spokeswoman Chris Cimko.

The Who to play Cincinnati benefit gig, 40 years after concert tragedy

The Who to play Cincinnati benefit gig, 40 years after concert tragedy