Jeff Brazier has spoken again about the death of Jade Goody and how ‘resilient’ the sons he shared with her have been in coping with it.

Speaking to The Sun about his work with bereavement charity Grief Encounter, Jeff, 41, said of sons Bobby, 17, and Freddie, 16: ‘My gosh, they are just so resilient. Of course they were so young when she died and it pains me to think they never knew Jade in the same way we all did.

When Bobby landed his first fashion magazine cover [for Man About Town] he said he hoped his mum was looking down on him and smiling. And I’m sure she was. 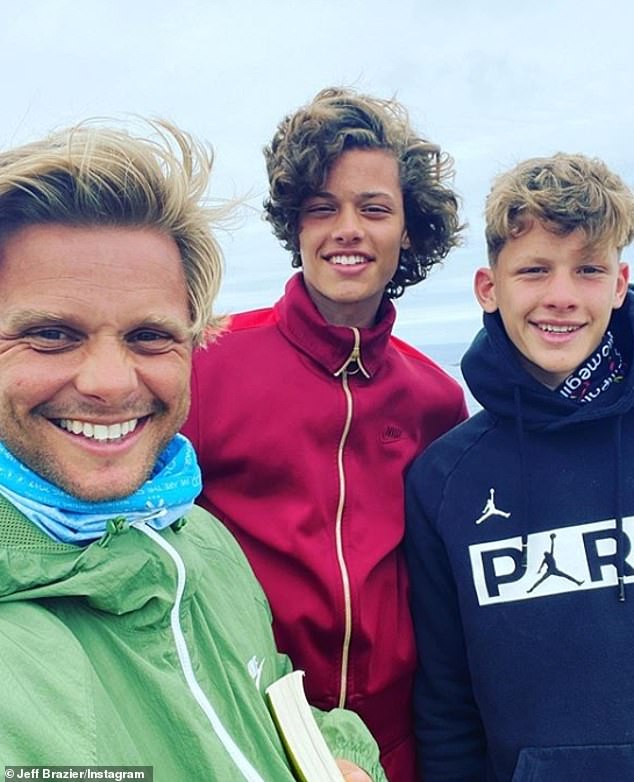 Strong: Jeff Brazier has spoken again about the death of Jade Goody and how ‘resilient’ the sons he shared with her have been in coping with it

When I look at Bobby and Freddie I see their mother’s colourful personality shining through. I mean, Jade was one of the biggest characters out there and the boys have both inherited that from her.’

He also admitted that he felt ‘a lot of male pride’ when Jade died of cervical cancer, aged 27, when Bobby was just five and Freddie was four.

‘I wasn’t in a relationship with Jade when she died so I felt I didn’t deserve to grieve and instead threw myself into caring for the kids and looking after their emotions.

‘I had a lot of male pride in those days and didn’t want to show my vulnerability, but now I know that only alienated me from family and friends.’ 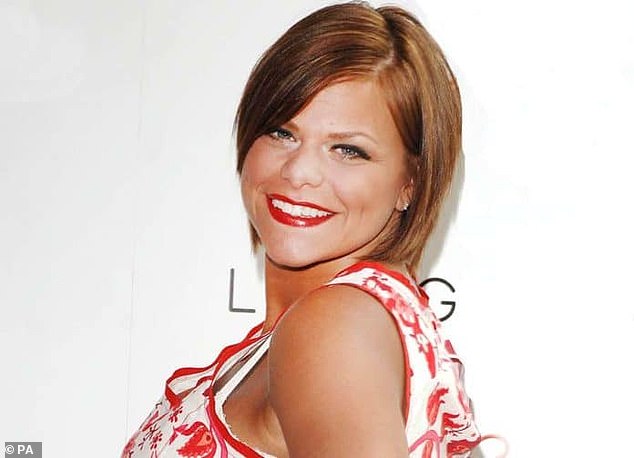 Tragic: He also admitted that he felt ‘a lot of male pride’ when Jade died of cervical cancer, aged 27, when Bobby was just five and Freddie was four

Jeff paid tribute to Freddie at the end of September, on his 16th birthday.

Sharing a series of snaps of him surrounded by balloons, Jeff wrote a sweet caption to go alongside it: ‘It’s not for parents to define a child’s purpose but if this kid doesn’t help thousands of people somehow I’ll be very surprised.

‘I’d give anything to have @freddybraz1er’s sense of adventure, energy and enthusiasm to have fun and depth and sensitivity around caring for others.

‘Excited for him to get the academic phase done this year so he can unleash his creative gifts on the world.’ 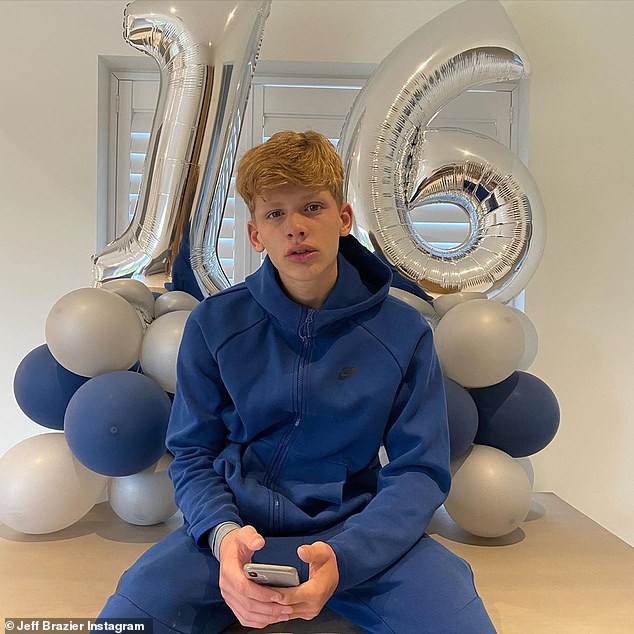 His boy: Jeff Brazier paid tribute to son Freddie on Instagram on Monday as he turned 16 and praises his ‘sense of adventure, energy and enthusiasm and sensitivity around others’ 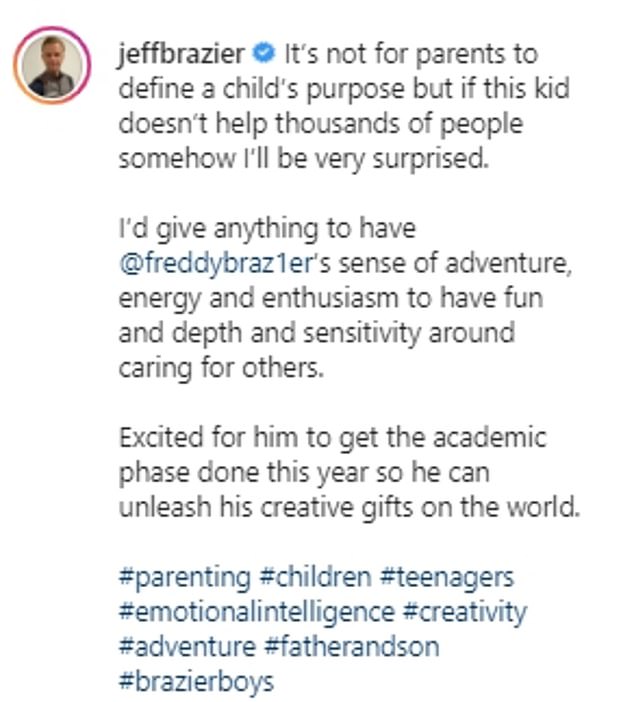 Kind words: He accompanied the series of pictures with a sweet post about how much Freddie means to him

Jeff is also dad to model Bobby, 17, from his relationship with Jade Goody, who sadly passed away in 2009 from cancer.

Earlier this month, Jeff insisted his marriage to his wife Kate is stronger than ever as the couple celebrated their second wedding anniversary following a turbulent 12-months.

The presenter paid tribute to Kate on social media as they stepped out for a romantic meal in east London to celebrate the special day, shortly after admitting they had to ‘pause and reset’ their marriage in 2019. 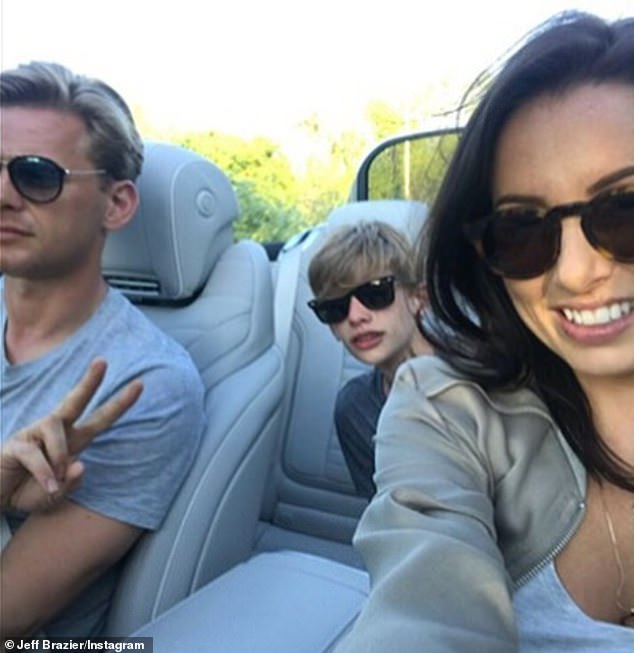 Memories: Among the images, were throwback snaps of Freddie with Jeff and his stepmother Kate 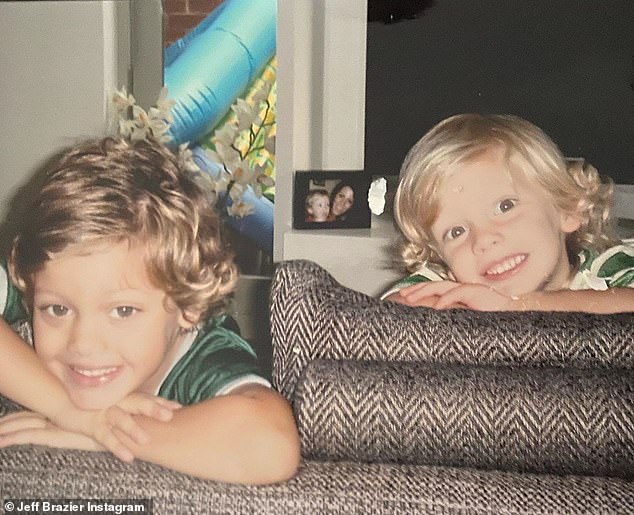 Brothers: There was also a picture of him with his sibling Bobby, (left)

Taking to Instagram, Jeff shared a snap of himself and Kate as they dined out at Shoreditch steak restaurant Blacklock alongside a lengthy caption in which he reflected on their ups and downs since exchanging vows.

He wrote: ‘Had such a lovely time celebrating our 2nd wedding anniversary yesterday that I forgot to do the Instagram post!

‘We did all the things we loved, Par 3 golf, @fredanddougs, @davidlloyduk to train & sit and read in the spa & then one of our favourite restaurants to finish up.’ 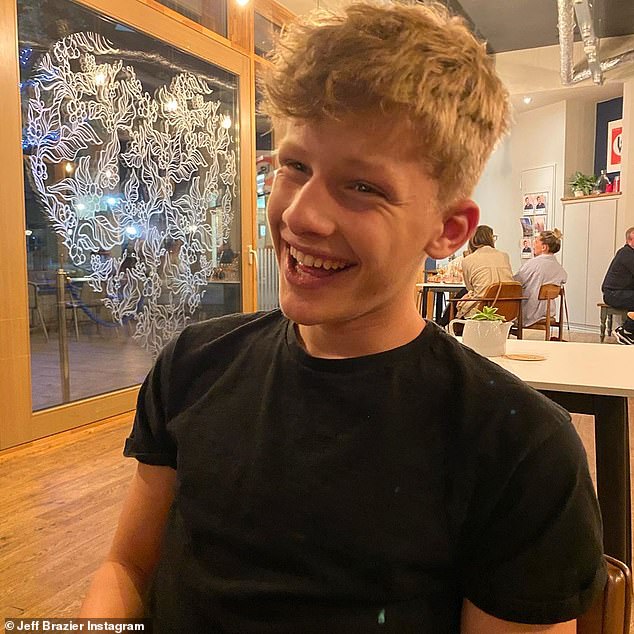 Jeff wrote: ‘I’d give anything to have @freddybraz1er’s sense of adventure, energy and enthusiasm to have fun and depth and sensitivity around caring for others’ 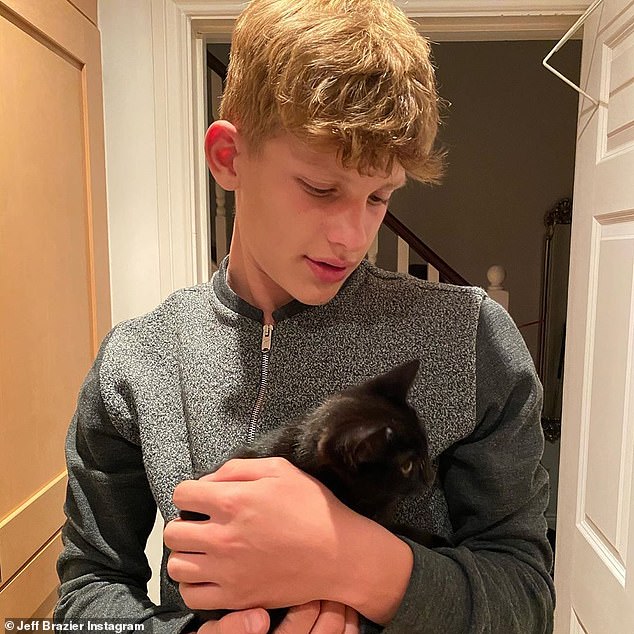 He added: ‘Excited for him to get the academic phase done this year so he can unleash his creative gifts on the world’ 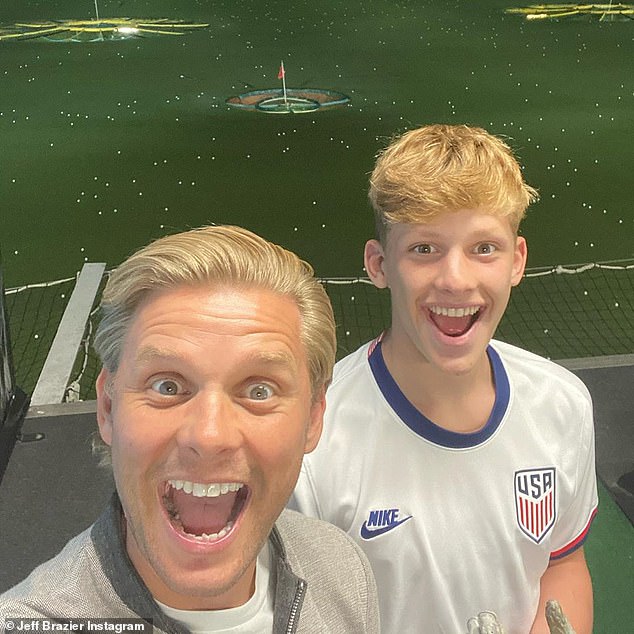 Like father, like son: Jeff shared this snap of them golfing and the family resemblance was clear to see

He added: ‘The key for us reaching 2 years in style? (@katebrazierpr and I are stronger now than we’ve ever been).

‘Own our flaws, share them, take responsibility for improving them, invest time into finding things we love to do together & acknowledge that the way you communicate with one another is massive but especially so when one of us is ‘triggered’

‘Also recognise that what you brought into the relationship could be the undoing of it unless you’re brave enough to embrace the vulnerability.

‘So if like us, you’re in a relationship that’s strong enough to support the growth you’re both going through, you’re always in with a shout.

‘Proud of how far we’ve come @katebrazierpr and thank you for a lovely day yesterday.’ 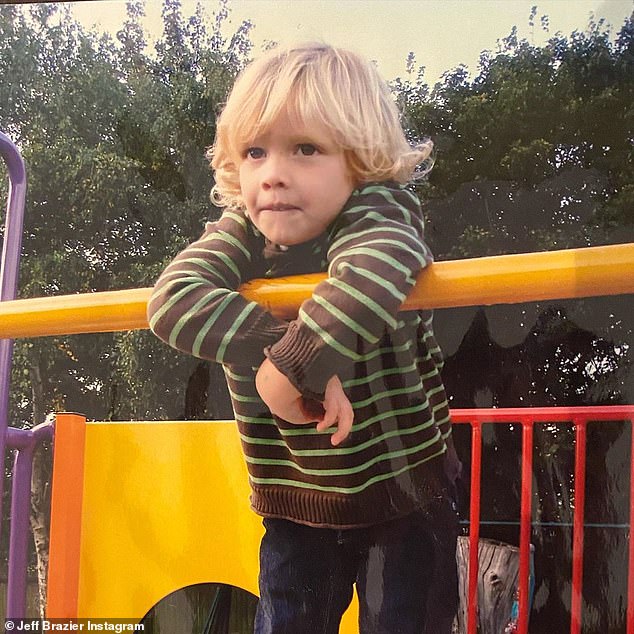 Day at the park: Jeff was every inch the doting dad as he showed off a selection of photos from over the years 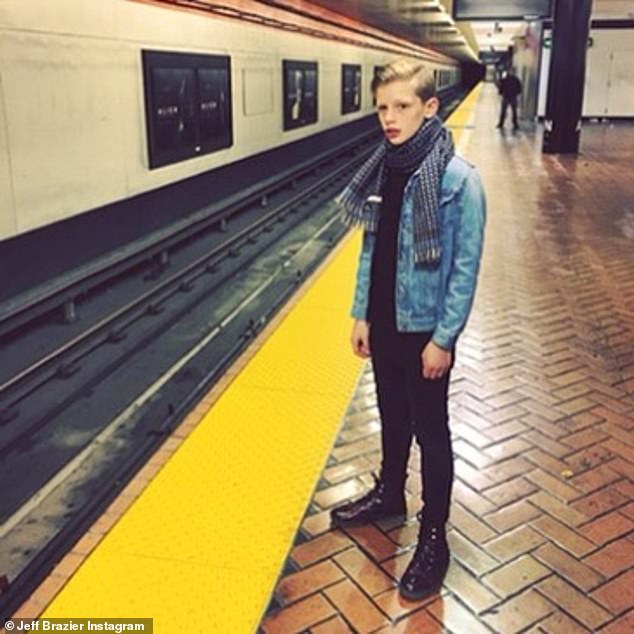 Heart and soul: It’s clear to see he has done a fantastic job of raising his sons 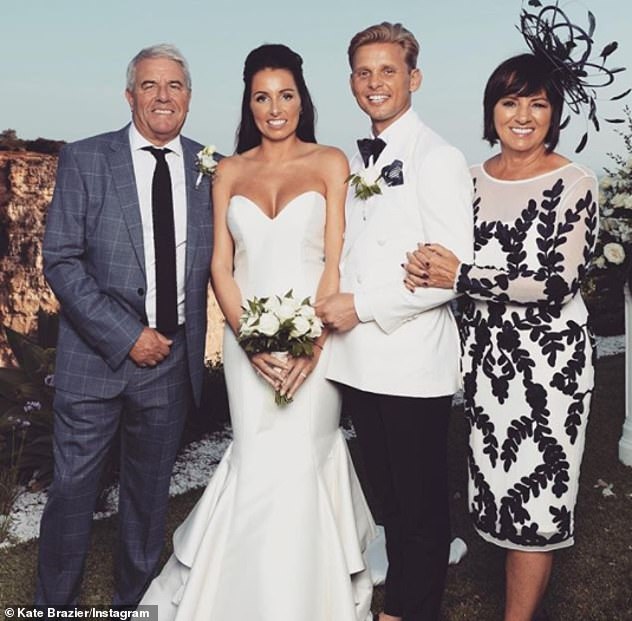 Old times: Jeff and Kate, who met in Portugal, married on September 15th 2018 but experienced some problems late last year

Teen, 15, stabbed to death in brutal fight on South London highstreet as two others arrested

Tracing the Source of Illicit Sand—Can it be Done?