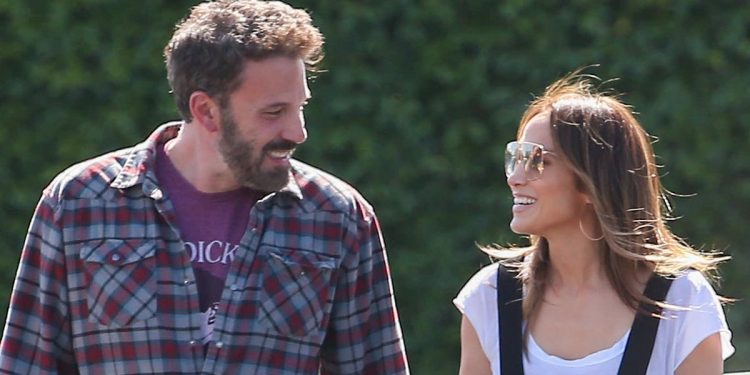 
Jennifer Lopez and Ben Affleck looked loved-up as they picked up her children on Wednesday, after confirming they are engaged after rekindled their relationship last year

Jennifer Lopez couldn’t wipe the smile off her face as she and fiancé Ben Affleck headed on a school run in Los Angeles on Wednesday, days after confirming their engagement.

The couple held hands as they collected the singer’s daughter Emme Muñiz, 14, – who she shares, alongside with twin Max Muñiz, also 14, with her ex-husband Marc Anthony, 53.

The singer, 52, announced her engagement to the actor, 49, in a short video via her fan newsletter, On The JLo last week and the couple have been spotted out and about in LA since.

The couple – who had previously been together from 2002 to 2004 – cut casual figures with J-Lo opting for a plain white t-shirt and a pair of black dungarees.

The singer accessorised the chic look with a pair of gold hooped earrings, bronze sunglasses and some heeled boots. And she was spotted holding a designer handbag.

Her fiancé opted for a similarly relaxed style of clothing when they collected her daughter, with him wearing a purple T-shirt which was underneath a long-sleeve plaid shirt.

Affleck accompanied the look with some black jeans and white trainers.

In her engagement announcement, the songstress admired her impressive green-diamond ring and declared: “You’re perfect.”

The outing comes just days after the couple had been spotted visiting several properties in and around Los Angeles, with them believed to be house hunting at the moment.

They’re said to have looked at estates over the weekend which are reportedly worth up to $72 million (£55 million), having visited locations such as Beverly Hills and Bel-Air.

Affleck opted for a plaid shirt and a pair of jeans
(

The outing comes just days after they announced their engagement
(

It’s understood two of his children – who he shares with ex-wife Jennifer Garner, 49 – had joined him and Lopez on the outing, which saw them tour potential homes.

Affleck and Lopez were once referred to as ‘Bennifer,’ having initially had a relationship between 2002 and 2004 – with them later separating and marrying other people.

She was married to Anthony from 2004 to 2014, whilst Affleck was the husband of Garner from 2005 to 2018. Affleck and Lopez however rekindled their relationship last year.