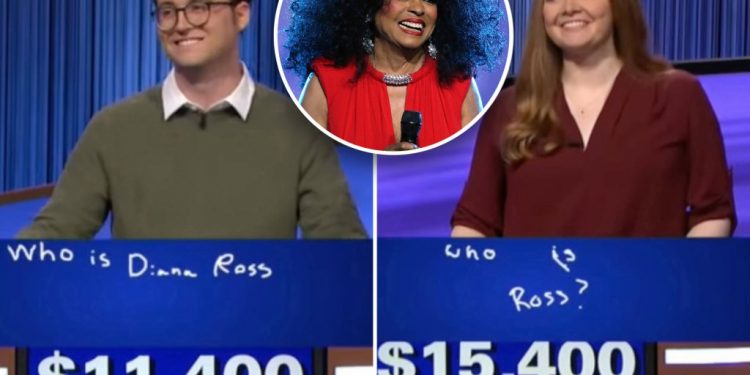 A couple of competitors during Monday night’s episode were supremely embarrassed following their mutual loss during Final Jeopardy.

The clue given: “In 2021 at age 95, this singer achieved a Guinness World Record for the oldest person to release an album of new material.”

The correct answer: Tony Bennett, who released “Love for Sale” last year with Lady Gaga, earning him the record-breaking title.

Unfortunately for contestants Karen Johnson, who put down $7,401 of her $15,400 cash, and defending champion Finn Corrigan, who offered up his whole $11,400 pot, the answer was not their guess of Diana Ross — who is, by the way, just 77 years young.

An embarrassed Johnson later sent her “deepest apologies” to the legendary R&B singer on Twitter for the gaffe.

“I didn’t really think you were the answer, but was running out of time and had to put something! 😬😭,” she tweeted on Tuesday.

Corrigan, who lost everything with his big bet, echoed Johnson’s defense.

“Me too!” he wrote. “I knew she was not nearly that old but better to write something than nothing. Just glad we’re in this together hahahaha.”

The former Supremes founder did release an album of new music last year, called “Thank You.” She also earned a Guinness World Records title in 1993 with the lofty title “Most Successful Female Singer of All Time” — not too shabby for a woman whose 78th birthday comes this Saturday, March 26.