Jersey Shore Gets Supernatural As A Pet Psychic Warns Angelina About Her Cheating Husband! 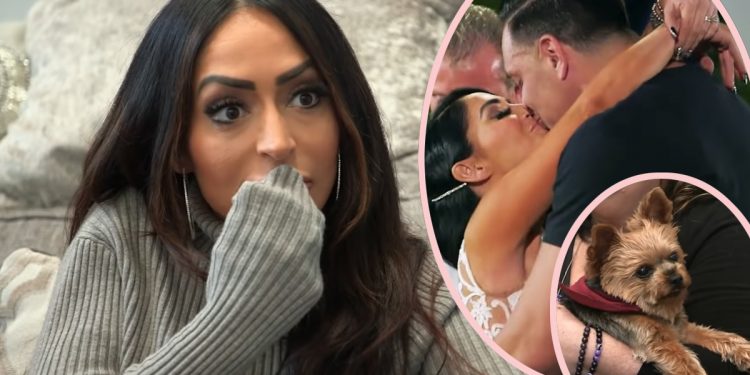 As part of her ongoing inner wrestling match with her marriage, Angelina Pivarnick invited co-stars Deena Cortese, Jenni “JWoww” Farley, and Nicole “Snooki” Polizzi over for a reading with a psychic. A pet psychic.

Yes, Teresa St. Frances, a “spiritual messenger” and “pet communicator” was there to speak to Peanut, Angelina’s pooch, and she quickly impressed the group by correctly identifying that Snooki was behind on writing her book — something Deena quickly confirmed!

Related: Snooki Admits She & Jionni Are Still Co-Sleeping With Their Kids

But it was Angelina’s marriage to Chris Larangeira that Teresa quickly identified as being the biggest problem in the room. She told the reality star:

“You and hubby are having real turbulent issues.”

We mean, any viewer (or reader of PerezHilton.com) would know that. Angelina reportedly filed for divorce over a year ago, but she never completely pulled the trigger. These are all known problems. However, the medium added that Peanut “really doesn’t like Chris.”

Angelina opened up to the woman about her issues, how Chris had admitted to spending the night in a hotel in Atlantic City with two women but insisted nothing happened. The unhappily married 35-year-old asked straight up:

“Did he sleep with her?”

Teresa broke the news by saying:

Angelina then unloaded about how the two have not had sex in forever. She lamented:

“I literally can get undressed right in front of him, he don’t even look at me. Is he talking to other women right now?”

“Come on, Angelina, you’re not that naive.”

When the Staten Island native asked what Chris was “doing for f**king sex” all this time without getting it for her, the medium gave it to her plainly:

Angelina seemed to accept the news in a confessional later, saying:

“Hearing that Chris is stepping out of the marriage is beyond hurtful to me.”

It was at this point that Teresa the pet psychic showed Angie some tough love, courtesy of her little pupper. She blasted:

“What is it going to take for you to wake up? Poor Peanut. She knows everything. She watches everything in this house. She is your real life angel. Peanut is ready to go.”

She also just hammered on Chris for a minute, saying:

“He doesn’t eat properly. He eats junk food all the time. He eats like a 6 year old. Your mother’s not so keen on him… Why would you want to be with a man who’s with all these other people? He’s also a narcissist?”

Damn! She got all that from Peanut?? She laid it all out on the table like tarot cards, saying:

“But you have to make a decision: Am I worthy enough to move on? Or am I going to stay in this unhealthy, dysfunctional relationship and poor Peanut here is going to be subject to the crap.”

As for signs from the future, Teresa told her she sees her moving on and not just into another home — but with another guy! She predicted:

“You’re not staying here, you’re actually going to go to a bigger house without him. But there’s somebody waiting. I see him and I see you’ve met him already.”

Oooh! Who could that be??

In her confession after the reading, Angelina admitted it shook her:

“Hearing from the pet psychic such bad news, I have a lot of f**king things to think about. Where do I go from here?”

Deena, meanwhile, wasn’t convinced. In her own one-on-one, she wondered:

See a clip of the wild reading (below):

As you might expect, Chris was none too thrilled about this little paranormal activity. He watched it all go down when it aired Thursday night and took to his Instagram Stories for an extended response, writing:

“Well I hope nobody believes anything that nut job had to say about me. It’s pretty disgusting how someone can go on national TV and defame me like that and how that was even allowed.”

We guess that’s supposed to be a cheating denial, but he was more explicit about defending his treatment of Peanut:

“I treat my animals like my children and love them all. All I’ve ever done was give my heart and soul to my entire family and at least I know my animals know that, even if I’m not appreciated by others.”

Not appreciated by others??

That little dig seems clearly leveled at Angelina, and no wonder. The two have been completely absent from one another’s social media lately. Not only that, Angelina recently posted a pic with Jovanna Del Plato from Double Shot At Love and captioned it:

So did she already move out? It certainly seems that way. And we can’t imagine this reading helped. You have to listen to your pets, but… do you listen to the people who say they can talk to your pets??

Hey, maybe if they give such good advice!