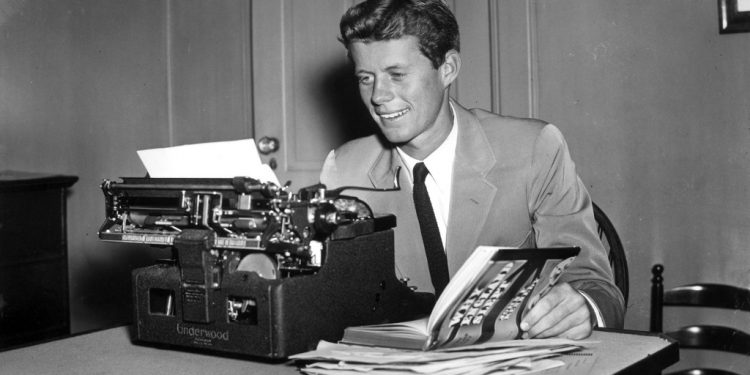 John F. Kennedy’s college admissions letter to Harvard University has resurfaced on social media some 87 years later, and the Twitterati are hardly impressed with the iconic 35th president of the United States.

The note, penned by the young White House hopeful on April 23, 1935, is currently archived at the John F. Kennedy Presidential Museum and Library in Boston, Massachusetts.

His prompt was simple — “Why do you wish to come to Harvard?” — but his answer was even simpler.

In an indisputably underwhelming statement composed of just five sentences, the 17-year-old Bay State native answered the query that would determine his educational future.

He wrote, “The reasons that I have for wishing to go to Harvard are several. I feel that Harvard can give me a better background and a better liberal education than any other university.”

He continued: “I have always wanted to go there, as I have felt that it is not just another college, but is a university with something definite to offer. Then too, I would like to go to the same college as my father. To be a ‘Harvard man’ is an enviable distinction, and one that I sincerely hope I shall attain.”

“ ’Harvard is a whole vibe. And I’m tryna catch the wave. Lemme in.’ — JFK,” one reader joked. The reaction garnered more than 59,000 likes on Twitter.

Even the Velveeta Cheese brand chimed in: “LOL OUR PRODUCT DESCRIPTION FROM OUR WEBSITE IS 28 WORDS LONGER THAN JFK’S HARVARD COLLEGE ESSAY!”

The Democrat’s short but influential term as then the nation’s youngest presidential elect began in 1960. JFK was assassinated on Nov. 22, 1963 at the age of 46.

Schlossberg, 29, previously attended Yale University and graduated in 2015 with a degree in history with a concentration in Japanese history.

He also appeared at the 2020 Democratic National Convention where he voiced support of now-president Joe Biden and touched upon JFK’s career.

“Times have changed, but the themes of my grandfather’s speech — courage, unity, and patriotism — are as important today as they were in 1960,” he said. “Once again, we need a leader who believes America’s best days are yet to come. We need Joe Biden.”