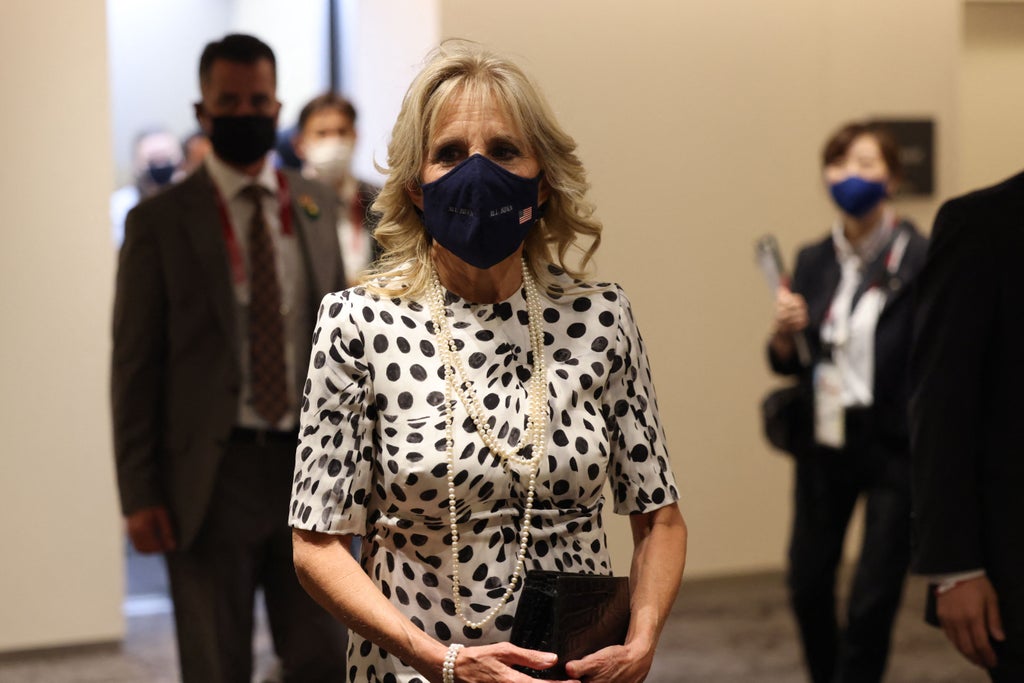 The game of first lady fashion is one played 12 months a year, at pretty much any time, watched by a global mass of avid spectators who care for reasons national, personal and political. Participants are drafted as soon as they get their jobs, whether they like it or not.

Jill Biden has famously been a reluctant player (“It’s kind of surprising, I think, how much commentary is made about what I wear,” she told Vogue).

Not for her the strategy of fashion diplomacy, mastered by Michelle Obama, wherein you champion a designer who bridges both your home country and a host country. Not for her the high fashion tactics of Melania Trump, conflating runway with realpolitik.

But she has, nevertheless, proved there are a variety of ways to score, as least judging by her first solo trip leading the American delegation at the Tokyo Olympics.

During her four days abroad, she not only represented the American industry, wearing a roll call of local designers. She also, perhaps more important, embodied the theme of the Olympics, which was billed as the greenest Games yet with the motto “Be better, together – For the planet and the people”. Biden apparently wore only a single new garment during the entirety of her trip to Japan: the Ralph Lauren navy jacket and trousers that were part of the official US Olympic Team uniform, and that she wore in her role as official US Olympic Team booster.

Other than that, her clothes were all recycled outfits from her closet. And not just at fun family getaways: at public events. Often very big, photo op-filled, recorded-for-history public events.

The red caped Narciso Rodriguez dress she wore when she landed in Tokyo? Worn during a trip with Anthony Fauci to a Florida vaccination site in June.

The floral Tom Ford worn to dinner with the Japanese prime minister, Yoshihide Suga, and his wife Mariko? Worn at the G7 summit in Britain in July.

The polka-dot Brandon Maxwell at the opening ceremony? Ditto (that one under the much-discussed “Love” jacket). Not to mention the white Michael Kors dress worn in Tokyo under a Team USA jacket; the dress had made an earlier G7 appearance under a navy jacket when President Joe Biden and the first lady arrived in Britain. Even the lilac dress that Jill Biden wore to deplane in Honolulu during the last leg of the trip had been seen before.

The recycled wardrobe may not seem like a big deal, but it has been practically unheard-of since the turn of the 21st century when it comes to image-making, celebrities and their powerful political or entrepreneurial equivalents.

Instead, the constant demand for new content seems to have been equated with new dress – whether on the red carpet, a premiere or an occasion of state. It has been fun to look at, a great guess-the-designer distraction. But it has also had the perhaps unforeseen effect of reinforcing the culture of disposability around fashion that has helped create the glut of stuff everyone now bemoans; of sending the message that every outing deserves its own outfit.

That Biden would just say no to this cycle is as big a break with recent tradition as the fact that she is continuing to work as a professor during her time in the White House. And it may be just as important, and maybe even (if people pay attention) influential.

She is not rejecting fashion – each look she wore is part of the current New York Fashion Week story, each one from American brands both establishment and up and coming. She’s doing her part to promote local business on the global stage.

Rather, by rewearing her clothes, she is underscoring their value; the idea that when you find a garment you love, that makes you feel effective and like the best version of you, you keep it. If it made you feel that way once, it will do so again. That such a garment is worthy of investment for the long term. That it’s as much for the woman inside it as for the watching public. That it is not a throwaway. That you could do it too. That this is something to which we can all relate, whether or not we’re aware of the sustainability side of things.

Of course, it’s possible that all this rewearing was just a coincidence. That she was so busy in the run-up to the Olympics (she is definitely very busy and, according to Vogue, she doesn’t have a stylist) she didn’t have much time to think about what she would pack, and just grabbed whatever from her closet.

But given it was her first solo trip, which automatically meant more eyeballs, and given its fraught nature – the angst and controversy around the fact these Olympics are taking place at all – such a conclusion seems unlikely.

Especially since pandemic restrictions resulted in a shortage of other audience members in the arena, Biden knew she would stand out in the non-crowd. That what she said may not be heard but what she wore would definitely be seen.

And though her recycling of styles became apparent during scattered events in the first 100 days of her husband’s administration – and also reflects the climate-focused aspect of the Biden agenda – it may have reached its apogee with this trip.

All of which suggests this will now be a defining element of Biden’s time in the East Wing; part of the way she takes the role forward. If so, everybody wins.

This article originally appeared in The New York Times

California is now being criticized from the left

Do I Have Bad Breath? A New Sensor Will Check

Do I Have Bad Breath? A New Sensor Will Check

How to Start a Sober Living Home: Tips for Investors