Millions of Americans are currently receiving coronavirus vaccinations as the U.S. works to restore some sense of normalcy from the pandemic.

According to the Centers for Disease Control and Prevention (CDC), 33 percent of the US population has received at least one dose and 19.4 percent are fully immunized, either from Pfizer-BioNTech, Moderna or Johnson & Johnson.

However, some people have been wary of being vaccinated due to fears of experiencing side effects such as fever or headache while others have heard anecdotal reports of more extreme reactions including large rashes on the arm or going into anaphylaxis.

Doctors say that severe reactions are rare, and that common side effects, such as pain at the injection site, are a sign that your immune system is building up a response.

DailyMail.com spoke to three infectious disease experts about what side effects to expect from each COVID-19, why some people get them and what it means.

The most common symptoms of the Pfizer vaccine are pain or swelling at the injection site, headache, fatigue, fever, chills and muscle pain.

‘Somewhere between 20 to 80 percent of people will experience that,’ Dr Richard Kennedy, a professor of medicine at the Mayo Clinic in Rochester, Minnesota, and co-director of the Mayo Clinic Vaccine Research Group, told DailyMail.com.

‘They’re mostly mild to moderate symptoms and they last about a day or two.’

Dr Thad Stappenbeck, Chair of the Lerner Research Institute at the Cleveland Clinic, in Ohio, said that, in his experience, headache is the most common side effect.

‘Headache is probably the most common and, anecdotally, from people I know who have been vaccinated,’ he told DailyMail.com

Then, there are rarer side effects, such as nausea, vomiting and swelling of the lymph nodes and armpits.

Kennedy says less than one in 10 people will experience these side effects.

Finally, there are the rare allergic reactions to the vaccine, which can includes hives, itching and swelling and even anaphylaxis. 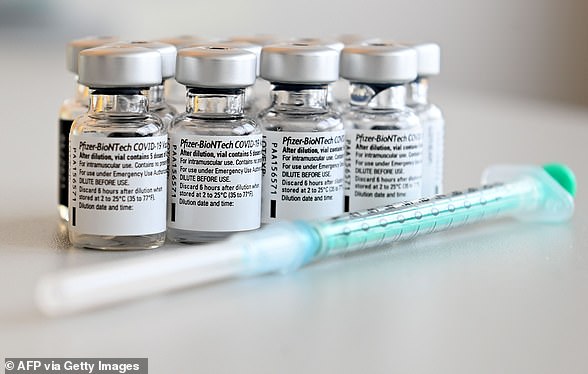 The most common symptoms of the Pfizer vaccine are pain or swelling at the injection site, headache, fatigue, fever, chills and muscle pain. Pictured: Bials of the Pfizer-BioNTech COVID-19 vaccine in Pfaffenhofen, southern Germany, January 15

Anaphylactic shock is a severe and potentially life-threatening reaction to an allergy from food, medicine or even a type of material.

The immune system releases chemicals that flood the body, blood pressure suddenly drops, and airways narrow, which prevents someone from breathing normally.

Kennedy said that about one in 100,000 people who get the vaccine will experience such a reaction.

However, the good news is that ‘it’s fairly rare and fairly treatable,’ he said.

For this reason, the CDC requires vaccination sites to monitor everyone for 15 minutes after receiving their shot and those with a history of severe allergies for 30 minutes.

The doctors also add that people are more likely to experience stronger reactions after the second dose because the immune system has been primed to fight the virus and mounts a response after getting the final shot, only to realize it’s a false alarm.

Similar to the Pfizer vaccine, the most common side effects of the Moderna vaccine include pain at the injection site, fever, chills, headache and tiredness.

‘They’re self-limited and gone within 48 hours.’ 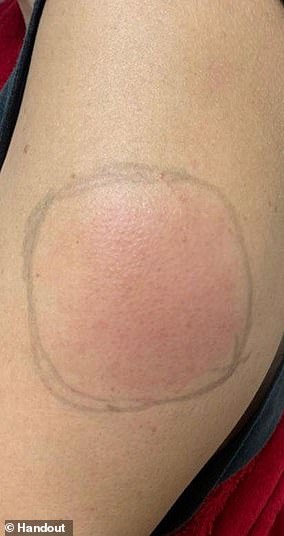 Another rare reaction, but only in Moderna patients, is ‘Covid arm,’ in which people experience itchy and swollen skin, sometimes accompanied by red lumps

Also like Pfizer, people are more likely to have stronger side effects after the second dose.

‘This is a well-documented phenomenon,’ Murphy said. ‘They can have hives and swelling, but it’s a very small number.’

Some recipients – but only of the Moderna shot – have reported experiencing ‘Covid arm,’ in which people have itchy and swollen skin, sometimes accompanied by red lumps or hives.

But the splotch is a harmless response from the immune system to the shot that fades from the arm within a week.

The official term used by dermatologists and allergists to describe the side effect is ‘delayed cutaneous hypersensitivity.’

‘The vaccine attracts immune system cells to the injection site, which is why you see a rash, then it dissipates and within a day or two,’ said Stappenbeck.

‘It’s a little troubling at first, but not significant and there are no long-term effects.’ 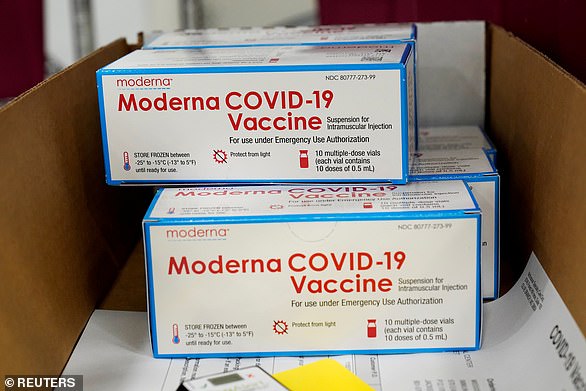 Similar to the Pfizer vaccine, the most common side effects of the Moderna vaccine include pain at the injection site, fever, chills, headache and tiredness. Pictured: Boxes containing the Moderna COVID-19 vaccine are prepared to be shipped at the McKesson distribution center in Olive Branch, Mississippi, December 2020

The Johnson & Johnson single-dose coronavirus vaccine has noticeably milder side effects than either of the vaccines from Pfizer or Moderna.

‘Almost across the board fewer people are reporting side effects,’ Kennedy said.

‘They are more mild. The most common ones are pain at the injection site, which is not surprising since it’s a needle entering your arm, which about 50 percent will experience.’

He said about one-third of recipients report fatigue and muscle pain, 10 to 15 percent report nausea, and about 10 percent report swelling and redness at the injection site.

So why does J&J’s shot produce fewer side effects? Murphy said it’s because this vaccine is different from the other two.

J&J’s vaccine combines genetic material from the new virus with the genes of the adenovirus – which causes the common cold – to induce an immune response.

Comparatively, Pfizer’s and Moderna’s vaccines use a newer platform, part of the pathogen’s genetic code called messenger RNA, or mRNA, to get the body to recognize the coronavirus and attack it if a person becomes infected.

There have not been reports of anaphylaxis among J&J recipients, but Stappenbeck said that may be because fewer people have received the shot.

‘It could just be a numbers game at this point,’ he said. 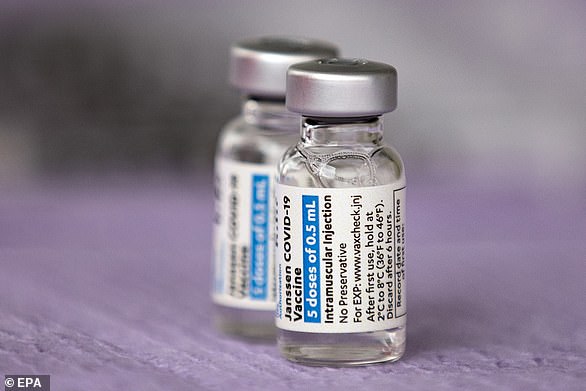 Side effects are much rarer among those who have received the Johnson & Johnson vaccine, potentially due to the fact that it uses a different platform than Pfizer and Moderna. Pictured: Vials of the J&J vaccine at a vaccination operation organized by St John’s Well Child and Family Center in Los Angeles, California, March 25

WHY ARE YOUNGER PEOPLE HAVING MORE SEVERE SIDE EFFECTS?

The doctors say this because immune systems evolve as we age.

‘As we get older, everything about or bodies doesn’t work as well and the immune system is no exception,’ Kennedy said.

‘The reality is that younger people have stronger immune systems and when you’re older, you don’t mount as big of a response,’ Murphy added.

However, it does not mean older people aren’t protected and that the vaccines are still just as protective in senior citizens as in young adults.

ARE WOMEN MORE LIKELY THAN MEN TO HAVE A REACTION?

Women are more likely to report worse side effects after receiving COVID-19 vaccines then men are, CDC data reveal.

They found that nearly 80 percent of the reactions were reported by women, making them four-time more likely to report a side effect than men.

Kennedy said that the reason behind this is a mix of biological and behavioral.

‘Women’s immune systems behave a little differently, they have a more robust antibody response,’ he explained.

SHOULD I GET A VACCINE?

All three physicians say that the unequivocal answer is: yes, you should get a COVID-19 vaccine as soon as it becomes available to you.

‘The efficacy of these vaccines have been remarkable,’ Stappenbeck said.

‘Less than one percent of fully vaccinated people are later infected. That’s better than the numbers we’ve gotten in the trials. that’s what we call real-world data.’

Stappenbeck also encourages to prepare for the possibility of having side effects, such as being able to take off work the next day just in case and having an adequate supply of water and Tylenol.

However, he suggests not taking the medication as a prophylactic.

‘The limit is four grams per day, and you don’t want to overdose on Tylenol.’

The group also adds that any potential side effects you may are less worse than the possibility of getting COVID-19.

‘You don’t know how sick you will be until you get infected,’ said Kennedy.

‘You may be asymptomatic or you might be on a ventilator. Then you’ll say I wish I had gotten the vaccine and, by then, it is too late

Whether you're driving the children...

DR LIZ O’RIORDAN: Did drinking like a fish aged 25 contribute to my breast cancer at 40?

A cough medicine taken by...