Joan Adon struggles and the Pirates pound the Nationals 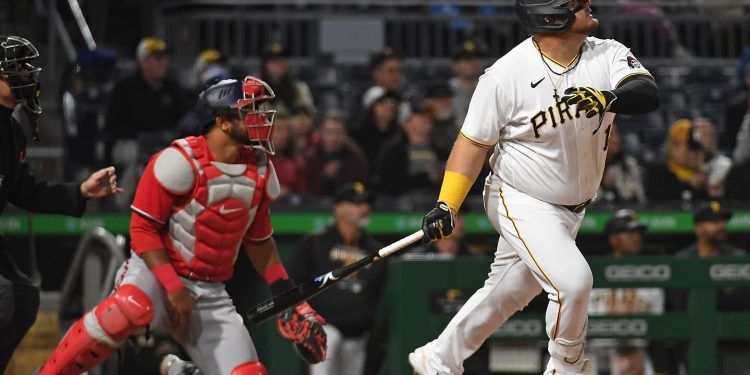 PITTSBURGH — For Joan Adon to take the next step in his career, Washington Nationals Manager Dave Martinez wants the rookie not to give in on any pitches. Last weekend, facing the New York Mets in his second career start, Adon grooved a fastball to Pete Alonso and paid for it with a grand slam. That can’t happen, Martinez explained Thursday afternoon, because a mid-90s fastball can’t just be thrown in the major leagues — it has to be well placed.

But a few hours later, in a 9-4 loss to the Pittsburgh Pirates at PNC Park, Adon couldn’t answer his manager’s call. Once the third inning tilted away from him, Adon tried to sneak out with fastball after fastball, putting them on tees. Of the Pirates’ six hits in a four-run rally, five of them — two singles, a double, a triple and Bryan Reynolds’s homer — were on fastballs in or around the middle of the plate. The sixth, a single for Yoshi Tsutsugo, came on a slider below the zone.

“In that third inning, the big thing was I was missing the zone with my breaking pitches,” said Adon, who got 15 called strikes with his fastball and only three with his slider. “I had to attack the zone with the fastball, and they were expecting it, seeing what was going on.”

“I felt like we were getting behind with the breaking pitch and the hitters had the advantage,” his catcher, Keibert Ruiz, agreed. “We have to make the adjustment a lot quicker during the game.”

Daniel Vogelbach, who smacked a leadoff homer against the 23-year-old Adon, logged four hits. And when Adon’s command failed him in the third, it was the Nationals’ defense that got him through the worst inning of his young career. A crisp relay — Lane Thomas to Alcides Escobar to Maikel Franco — kept a double from turning into a triple for shortstop Kevin Newman. Two batters later, once Cole Tucker had ripped a triple, Franco snared a sharp grounder and threw to first for the third out.

Those two plays let Adon stay in and record five more outs (four by strikeout). Without them, he might not have made it out of the third, a dangerous scenario for the Nationals’ overworked relievers. Yet by night’s end, it was hardly noticeable that a 10-man bullpen was actually saved a bit of stress.

Steve Cishek, Sean Doolittle, Kyle Finnegan and Tanner Rainey each pitched an inning to beat the Atlanta Braves on Wednesday. Paolo Espino, the club’s long man, was needed for 55 pitches after Patrick Corbin struggled in Atlanta on Tuesday, making him unavailable. Austin Voth, another multi-inning reliever, threw 38 in that same contest.

So Martinez asked Hunter Harvey (11 pitches for one out), Andrés Machado (34 for three), Patrick Murphy (38 for three) and Victor Arano (23 for three) to follow Adon. The five pitchers combined to throw 197 pitches. Murphy faced four batters, yielding two walks and two singles before notching an out in a rough seventh. Adon finished with a messy final line of 4⅔ innings, nine hits, six earned runs, three walks, five strikeouts and too many hittable fastballs.

“His misses were bad, and then when he threw a strike, they were right down the middle,” Martinez said. “He was missing spots pretty much all night. The last inning and a half, he actually threw the ball where he was supposed to throw it, and you saw the quick outs. So [it’s] a factor of just being young.”

Who keyed the Nationals’ three-run first inning? It originated with Pirates starter JT Brubaker, who walked three of the first four batters he faced. To bring them in, Ruiz first crushed a single off the right-center wall. It could have been a double, plating more than one run, if the runners ahead of him didn’t have to hold and see whether the ball would be caught. Then left fielder Yadiel Hernandez followed with a two-run single, continuing his productive stretch. Ruiz later collected his eighth hit of the season on a single in the fifth.

Why was Dee Strange-Gordon a late scratch from the lineup? Strange-Gordon is headed to the injured list, according to a person with knowledge of the situation, after the Nationals sent him back to the hotel Thursday with an undisclosed illness. Following the loss, Martinez told reporters he could not say more about Strange-Gordon’s situation, adding the team would decide Friday whether it has to make a roster move. But outfielder Donovan Casey, Strange-Gordon’s likely replacement, was on his way from Class AAA Rochester by Thursday afternoon, according to two people familiar with the matter.

Casey, 26, was part of the four-player package for Max Scherzer and Trea Turner last July. He was invited to spring training in March and then started with the Red Wings. And while he has flashed power and defensive versatility, high strikeout rates have slowed his path to the majors. His first appearance with the Nationals would be his big league debut.

Why did Lane Thomas replace Strange-Gordon instead of Victor Robles? “We look at all his data, and we know Victor struggles against guys with good sliders,” Martinez said of Robles not being in the original lineup, which had Strange-Gordon in center and Hernandez in left. “So tonight I felt like we’re just going to continue to work with him on his swing, get him some extra swings and then get him back in there [Friday].”

Robles, once a top prospect, is 0 for 17 with six strikeouts to begin the year. Since the start of 2020, he has struggled against all pitch types, posting an on-base-plus-slugging percentage of .590 in 575 plate appearances.

Brubaker threw his slider about 34 percent of the time in 2021, according to FanGraphs. Asked about hiding Robles’s weakness instead of testing him against Brubaker, Martinez showed how he might manage Robles moving forward.

“It’s going to be a little bit different this year because I don’t want him to get beat up right away,” Martinez said. “Gradually, I want him to get comfortable with this swing so that he does learn how to hit the slider and lay off sliders.”

When it comes to international financial fraud, New Zealand is far from squeaky clean | Max Rashbrooke

When it comes to international financial fraud, New Zealand is far from squeaky clean | Max Rashbrooke