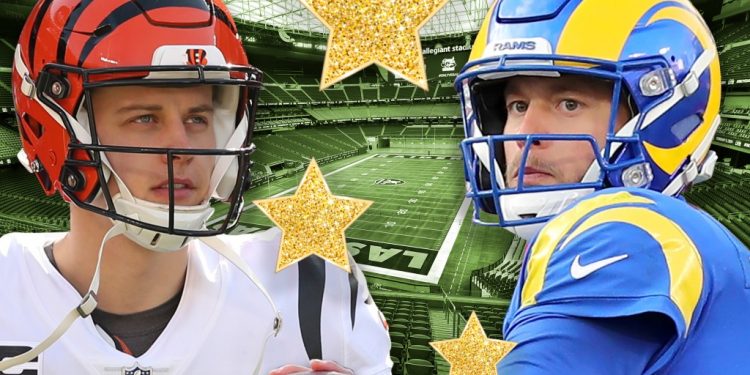 
Are you ready for some football?

America is waiting with bated breath: Super Bowl LVI will capture the nation’s attention on Feb. 13, 2022, at 6:30 p.m. (Eastern). Whether you’re tuning in for the National Anthem, the men wearing tight pants and jockstraps while they bang into each other, the notorious commercials or the much-anticipated half-time show, the Super Bowl boasts an impressive 90 million+ viewership.

Hopefully, however, you stocked up on snacks and party supplies earlier than this — that is, unless you’ve been invited to one of the uber-exclusive celebrity luxury parties taking big cities by storm.

As the Los Angeles Rams clash with the Cincinnati Bengals at the SoFi Stadium in Inglewood, California, for Super Bowl 56, we got to wondering: What do the stars predict for powerhouse quarterbacks Matthew Stafford, 34, and Joe Burrow, 25? And what can we expect from the rap gods performing at the halftime show?

Good thing I’m a pop culture astrologer — because this is just what I do!

Matthew Stafford was born on Feb. 7, 1988. This makes him a focused Aquarius sun with a communicative Libra moon. His natal chart is significantly based in air and fire elemental energy, which means that he is passionate, direct and aggressive. Being a star quarterback for the Los Angeles Rams, he’s in the right business to attack his goals — and opponents — with intellectual strategy. He’s certainly calculating and has an excellent vision in his plans and can think outside of the box. All of that can be seen with the way his Mercury, the planet of communication and the mind, is intricately placed in his chart. He’s self-confident and decisive. This leads me to believe that what makes him so successful isn’t just his brute strength and talent — yes, we’ll get to that next — but his cerebral capacity.

But, of coursethere’s also an immense amount of his birth chart that speaks of him being a star athlete. His chart shows incredible physical vitality and stamina — revealing his immensely potent mental and physical abilities are a perfect match. This is because his sun links harmoniously with Mars, the planet of action. Mars also smiles upon Jupiter, giving him tremendous resources of energy and the likelihood of luck and honor in sports. His immense talents in combat and athletics were quite literally blessed from the stars. Last to note, his sun is in a sharp angle with Pluto, enhancing his ambition and desire to be seen as a leader.

Joe Burrow was born on Dec. 10, 1996. That makes him a fiery Sagittarius sun with an equally unpredictable Sagittarius moon. His birth chart is composed of predominantly fire and earth elemental energy. This means that he can channel his passion and energy in tangible, long-lasting ways. As a person, he finds a way to run a bit more on his instinct rather than strategybut once he makes a decision, he can funnel everything he has into it in and stick with it to make happen. In a sense, he is somewhat like an unstoppable force: he can be spontaneous, shocking and intimidating, leading others to be confused about his plan of action in order to keep them off-balance. But once he senses an opening, he can seize the day with devastating effect. His ability to read situations, people and life with a heightened intuition is also prominent in his chart, with his sun and moon united — meaning he was born on a new moon. He has no problem taking risks and trusting his own flow. With his Mars linked to Neptune, he has a hypersensitivity to people’s emotions and can capitalize on their fears, and then with his Jupiter and Neptune united — the two planets of spirituality — he can blend this intuition with his practical side.

But then, of course, his chart has significant astrological aspects that also speak of profound athleticism and physical aptitude. Burrow’s sun is in an energizing link with his Mars, bringing him great strength — but also a quick temper, with a high probability of being opinionated and argumentative. When harnessed, it brings him even greater physical drive. His Mars also links beautifully with Jupiter, further enhancing his ability to receive luck and fortune in sports.

What do the stars predict for Matthew Stafford and Joe Burrow for Super Bowl LVI?

Moment of truth: who has a better chance of victory in Super Bowl LVI? While I would’ve loved to have their exact times of birth in order to determine their accurate Ascendants (they are each welcome to reach out to me directly, FYI), we can still tell a lot about each of their personalities from their dates of birth.

Stafford is the more intellectually calculating of the two, with Burrow being the more intuitive and aggressive between them. Stafford relies on his strategy, while Burrow trusts his instinct and is unafraid to use surprise to shock and terrify his opponents. They’re both intimidating — and successful — for their own reasons.

Let’s start with Stafford. On the date of the Super Bowl, I can see that he has a tremendous amount of luck on his side. First off, the transiting sun will be nearly conjunct his natal Mercury, giving him even sharper mental skills and intellectual vision — playing to his innate strengths. The transiting sun will also be linking to his natal Jupiter, representing breakthroughs of success that are important to his entire life’s goals. Immense happiness will surround him on this day.

The transiting Jupiter will additionally link to his natal Neptune, bringing an expansive view on life. However, while all of this is phenomenal and could easily spell a big win, there’s one major factor I must bring up: Transiting Saturn — the planet of life lessons, karma and challenges — is inching toward his sun.

On one hand, this can bring a glorious peak in success — a 30-year high to set the tone of his life and career going forward forever. To say this is one of the most significant periods in his life is an understatement.

Yet, on the other hand, all of that pressure can also bring dramatic turns of fate and a sense of loneliness if he collapses beneath the weight. Saturn is the great teacher planet and causes people to be forged through fire into steel.

Now let’s look at Burrow. On the date of the Super Bowl he, too, has a strong dose of Mercury and Saturn energy affecting his chart. His emotions will be especially important to him on this day.

On one hand, he will have tremendous initiative — but because his moon will also be afflicted by other planetary energy, he will also possess a great level of confusion, particularly later on that day. That will impact his mind and ability to think rationally. Luckily, with his Mercury in a strong link to Saturn, he will be doing his best to channel practicality for this brief period in time, too.

Transiting Jupiter will bring luck to his communications as it smiles upon his natal Mercury. The very best aspect he has going for him, though, is a mighty link between transiting Saturn as it fuels his natal sun and moon. He has been doing his best to become more structured and organized, especially in regard to his achievements. Yet this trend will last into the rest of the year and is technically only getting started.

Because of all of this: My genuine assessment is that Stafford has a more positive chart on the day of the Super Bowl, while Burrow’s will bring learning curves and life lessons in order to improve his career and path going forward. Both will receive invaluable wisdom from the experience, but with so much confusion — in particular in Burrow’s chart — at this time he would have to truly block all of it out to see through that fog.

What are predictions for the Super Bowl LVI Halftime Show?

Rap gods will be taking the stage for the halftime show — and with the stars above dancing so beautifully this year, there are also liekly going to be some jaw-dropping surprises in store! You heard it here first.

Let’s take a peek at our scheduled performers!

Snoop Dogg — who called the gig “a dream come true” — was born on Oct. 20, 1971. He is an entertaining Libra sun with an intense Scorpio moon.

Eminem was born on Oct. 17, 1972. He is an outgoing Libra sun with an unconventional Aquarius moon.

Mary J. Blige was born on Jan. 11, 1971. She is a practical Capricorn sun with an intuitive Cancer moon.

Kendrick Lamar was born on June 17, 1987. He is a spicy Gemini sun with an emotional Pisces moon.

These icons will tear up the stage, bringing surprises at every turn. Air sign energy dominates this crew. Yet with the moon transiting Cancer on this day, they’ll be doing their best to speak to people’s hearts and bring a message of family and camaraderie. They’ll each have their big moment — but with the sun and Saturn in Aquarius, it shows that they’ll be working as a team, understanding that they are even more powerful together. Those will be the important themes.

Best of luck to the performers, teams and athletes! Let’s get ready to rumble!

Kyle Thomas is a globally recognized pop culture astrologer who has been featured in ”Access Hollywood,” E! Entertainment, NBC & ABC television, Cosmopolitan Magazine, Hulu, Bustle, Elite Daily, Marie Claire and more. He is known for his cosmic guidance for celebrities, business executives and prominent influencers. His work harnesses the power of the stars in regards to entertainment lifestyle and trends affecting people worldwide. For more information, visit KyleThomasAstrology.com.