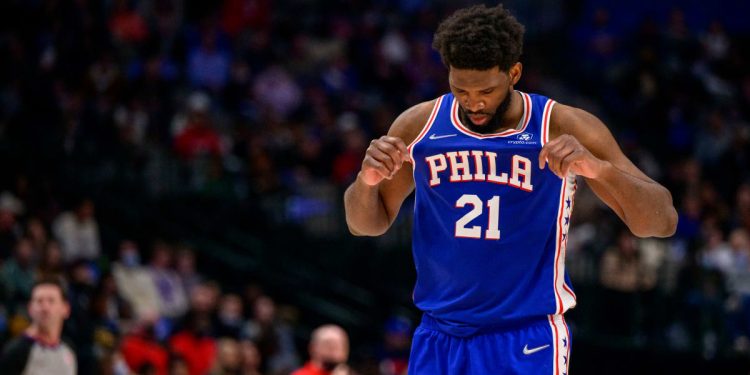 Joel Embiid has long had to answer questions and share his feelings on the Ben Simmons saga that unfolded after last year’s playoffs. After the 76ers were finally able to trade the disgruntled point guard ahead of the NBA’s Thursday trade deadline, Philadelphia’s star center was happy to be moving on.

“Yeah, I’m happy that I’m not going to be answering any more questions about that subject,” Embiid said after a 100-87 win over the Oklahoma City Thunder on Friday night, per ESPN. “It’s good that, not just for me, but my teammates, the whole organization. The whole year, it was pretty annoying with the whole situation, but I’m glad that everybody has moved on.

“I wish everybody the best in whatever they want to accomplish, but I’m focused on winning games here and trying to win a championship.”

After missing the entire 2021-22 campaign thus far due to mental health concerns, Simmons finally got his wish of a trade on Thursday afternoon. General manager Daryl Morey was able to strike a blockbuster deal with Brooklyn, that saw James Harden and Paul Millsap shipped to Philadelphia in exchange for Simmons, Seth Curry, Andre Drummond and a pair of first-round picks.

Embiid didn’t mention Simmons by name during his postgame press conference on Friday, but he did say that it “sucks to lose” some of his teammates in the trade. He was able to take one last shot at the point guard, by posting a meme on Twitter Thursday of a man in a suit at the funeral of one of his “haters.”

When asked how long he had planned the post, Embiid did his best to play off the question.

“Honestly, I don’t even know what the tweet was about,” Embiid said with a smile, per ESPN. “I just tweeted a random person. I just saw the picture on the internet and I thought he was well-dressed. He had a nice suit on, good looking, you know, he had some swag.

“So I just thought it was a good picture.”

Embiid will now get a new running mate in Harden, who will join his third team in just over 13 months after a tumultuous tenure with the Nets. Although the 32-year-old isn’t quite at his MVP form, he’ll give the Sixers another superstar on offense, something that the team has lacked during the Embiid era.

The 27-year-old center already thinks Harden is the best player he’s ever played with.

“It was just a lot of excitement,” Embiid said of the conversation he had with Harden following the trade. “Just excited. You talk about guys that I’ve played with, he’s probably gonna be the best yet, based on what he’s accomplished in his career so far.

“So it’s just about getting everybody on the same page and finding the right way to play. We already have a system in place so we’ve just got to bring him along and incorporate a bunch of new stuff with a bunch of stuff that he’s good at and put it all together.”

Harden has reportedly been nursing minor hamstring and hand injuries, but should make his Sixers debut soon enough. Philadelphia is currently 33–22 with 27 games remaining.

For more 76ers coverage, head over to All 76ers.

How Americans feel about Russia-Ukraine conflict