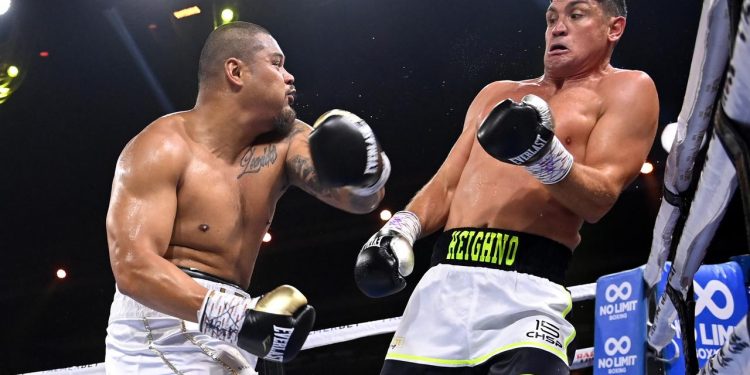 
Controversial former NRL centre Joey Leilua has reportedly had the door to a return to the NRL slammed shut after an expletive laden swipe at his critics last month.

Stream every game of every round of the 2022 NRL Telstra Premiership Season Live & Ad-Break Free During Play on Kayo. New to Kayo? Try 14-days free now.

But while it was a fun fight as Leilua went all out attack, his post-fight antics may just have officially ended his NRL career.

Although he faded late in the fight after going all out in the early rounds, Leilua fired shots at his critics after the bout.

“For all those haters that f***ing said I can’t last four rounds — thanks mate, you gave me inspiration tonight,” Leilua said.

“I knew I could fight. I just wanted to show the world that I could f***ing last four rounds.

“The stereotype of me being fat and can’t last four rounds, you know what, f*** yourselves — there you go.”

But after an ugly exit from the Wests Tigers, The Daily Telegraph has reported that it was the final straw to nail the coffin shut on any NRL future.

An NRL CEO told the paper that it turned off any club that thought it might offer the controversial star a lifeline.

“He did himself no favours,” the CEO said. “He is the type of player that has the talent to make it back from the UK but we will not see him in the NRL after that. He is a loose cannon.”

Leilua has played for the Sydney Roosters, Newcastle Knights, Canberra Raiders and Tigers in his 225 game career but has been followed by controversy including a “dog shot” in 2020 when he earned a four week suspension for a coathanger on Panthers fullback Dylan Edwards.

Leilua was in and out of the Tigers side in 2021 before being moved on by the club.

But Leilua didn’t hold back, taking aim at coach Michael Maguire, writing on Instagram: “Btw I wouldn’t play for someone that blames the team all the time! And not once himself! #Madge.”

But before his fight with Heighington, Leilua opened up on his polarising career in the NRL.

Asked how people would describe him as a footy player, he told Stay Fresh Media: “A grub.”

“People find me as a footy player a grub and a bad person but that’s just the way I play.

“Everyone thinks I’m a bad person and I can’t wait to prove them wrong.

“My whole career, everyone f***ing hates me and that’s just part of the territory, if you play how I play, you’re always going to get that from people.

“It doesn’t bother me, as long as those people close to me know who I am and care about me, that’s the only opinions I take, I don’t really care about the outside world.

The Westminster Winners And Losers Of 2021