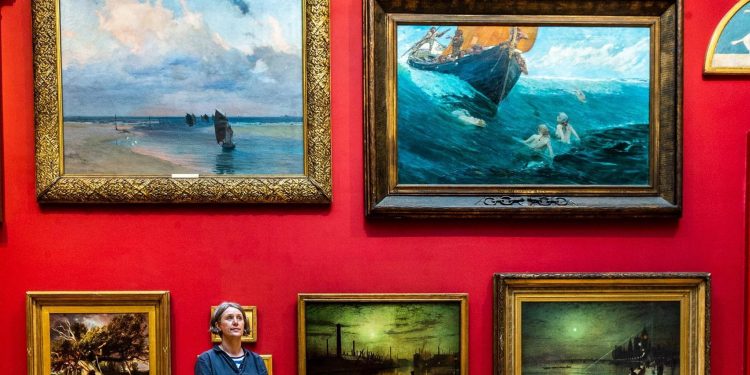 Much-loved Leeds artist John Atkinson Grimshaw’s atmospheric Reflections on the Aire- on strike became part of the gallery’s collection earlier this year through the agency of the Leeds Arts Fund and using legacy funding from the Patricia Hurst bequest.

One of the famed 19th Century artist’s classic moonlit paintings, the beautiful piece was created by Atkinson Grimshaw in 1879, and depicts a solitary female figure gazing out over the gloomy waters of the River Aire towards Hunslet.

With the darkened silhouette of a silent Iron Foundry, it’s a rare example of Grimshaw painting a ‘social realist’ scene.

Leeds Art Gallery is pleased to announce their new acquisition a painting ‘Reflections On The Aire’ by John Atkinson Grimshaw, which is on display in the Ziff Gallery at Leeds Art Gallery alongside another John Atkinson Grimshaw ‘Reflections On The River Thames’. Pictured: Christine Bradley, Registrar for Leeds Museums and Galleries next to the new painting.

Research has revealed that the period was a grim time in Leeds, and particularly in Hunslet, with industrial unrest and huge social deprivation.

In the early part of 1879 the Midland Railway, where Grimshaw once worked as a railway clerk, saw workers out on strike. When it was displayed in Leeds at the time, the painting attracted considerable interest in the local press.

Now it has come home after being acquired from a private collector.

It will hang alongside its likely to be its companion, Atkinson Grimshaw’s Reflections on the Thames – Westminster, 1880, which has long been part of the gallery’s collection.

‘Reflections On The Aire’ by John Atkinson Grimshaw

They will be displayed in a newly configured Victorian Gallery which will also accommodate more Grimshaw paintings from the Leeds collection, including another recent acquisition In the Pleasaunce from 1875.

Nigel Walsh, gallery curator, said: “We’re delighted to have reunited two such significant and distinctive pieces of Grimshaw’s work, both of which perfectly convey Grimshaw’s unique and ground-breaking style along with his powerful sense of social realism.

“We hope that finally bringing these two paintings together again will do justice Atkinson Grimshaw’s original vision and message we are extremely grateful to the Leeds Art Fund for helping to make that a reality.”

Born in a simple back-to-back house in Leeds in 1836, Atkinson Grimshaw later left his job as a railways clerk to pursue a career as a self-taught artist.

He went on to become one of the most significant artists of his era with a distinct and experimental style inspired by his fascination with the different effects of night light. His work saw him combine moonlight with gas and the new incandescent electrical lighting of the time.

Reflections on the Aire- on strike will be on display in the Ziff Gallery at Leeds Art Gallery, which is free to enter.