John Carver: ‘I get stick from my mates for referring to Scotland as we’ | Scotland 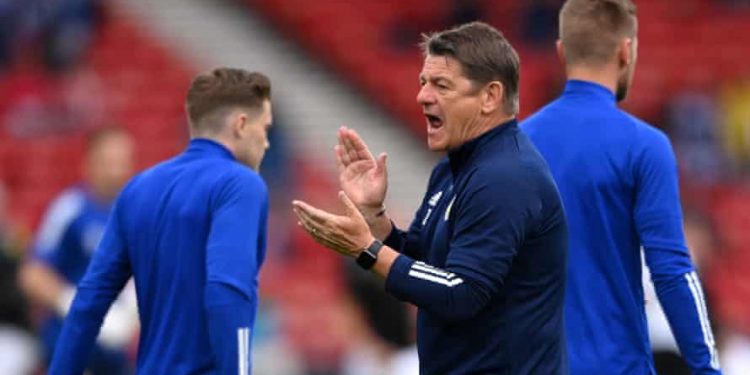 
A planned 30 minutes with John Carver concludes at just short of three hours. Given the subject matters range from Paul Gascoigne to Steve Clarke and so much in between, this is hardly a shock.

Take, for example, the case of Hatem Ben Arfa one half-time at Newcastle. “He was having a rough game and Alan Pardew had a right go at him,” Carver recalls. “Suddenly Hatem turns to a fridge that would have taken 10 men to pick up. He tried to lift it and throw it at Pards but he couldn’t. He storms out of the dressing room, into the coaches’ office. Five minutes later he reappears eating a sandwich, ready to play the second half.”

Carver and Gascoigne were together as friends and apprentices at Newcastle. The former still remembers the emerging midfield maestro being sent to town for – and retrieving – green paint after spilling white emulsion on a training pitch. Simpler times. Kevin Keegan? “He made everybody feel part of the first-team’s success. I was an academy coach and he says: ‘It’s your big day, John. Derek Fazackerley’s not well so you are taking the first team.’ I was 31.”

Carver is a raconteur with substance. Clarke is among those surprised that his assistant is not employed by a club, such is his level of knowledge. The scenario is to Scotland’s benefit. Since joining the setup in late 2020, Carver has re‑established a close bond with Clarke – they were Newcastle coaches together under Ruud Gullit – and taken on an influential role as Scotland continue on their upward curve. Their World Cup play-off against Ukraine has been delayed until June but a friendly at home against Poland on Thursday has taken its place.

Carver’s memories of qualification for last summer’s European Championship finals, achieved via penalties in Serbia, come with a grimace. “Just as I pushed off to celebrate, Stevie Woods clipped me and Stephen Reid jumped on top of me,” he says. “I tried to stop myself falling so I pushed off again … and tore my calf. I was screaming at others not to come anywhere near me. That’s why you don’t see me in any of the celebration pictures. Reidy had to stick me on his shoulders and carry me up the tunnel.

This Scotland team has one of the best atmospheres I have ever walked into. They actually want to be there

“I said yes to this job because I knew Steve would value my opinion and trust. I am allowed an opinion. I learned about that the hard way. When Ruud Gullit came to Newcastle I was a bit of a yes man because I’d just been promoted to the first team, at my own club, alongside this superstar footballer. I sat and agreed with everything he said. I almost lost Alan Shearer, Gary Speed and players like that because they saw me as that yes man. I held my hands up in front of them one day and told them I’d made a mistake.”

Clarke’s return to Chelsea after Gullit was sacked in 1999 meant Carver retained first-team involvement at St James’ Park. After a hugely successful period alongside Bobby Robson, he was marginalised by the Graeme Souness regime. “They wanted me to take a pay cut and change my title and that hurt me. I had been at the club for most of my life. I remember working at Leeds and Sam Ellis [a fellow coach there] saying to me: ‘John, leave it. It’s done now.’ But I couldn’t because it hurt me so much. I was wounded. I used to get into cold sweats going back to the stadium.”

Yet then, as now, Carver, 57, was held in high esteem by the Newcastle public. He is one of their own. He returned to the club to assist Pardew before a spell as caretaker manager during turbulent times. Famously, he accused the centre-back Mike Williamson of deliberately getting himself sent off during a defeat at Leicester.

“I only did that because I called him out in the dressing room in front of his teammates and he didn’t respond to me,” Carver says. “I wanted him to react. We were fighting for our lives. People deserved to know what my thoughts were.” Exiting in 2015 proved somewhat easier. “It was done the right way. I had done all the jobs in the club. It was time to try something different.”

Carver’s demeanour markedly changes when conversation turns to Speed, who took his own life in November 2011. He regards Speed and Shearer as the best two all-round players he has coached. Speed hired Carver as first-team coach at Sheffield United, which emphasised mutual respect. “I think about him all the time,” Carver says. “We developed a great relationship and I find it tough talking about him. He had an unbelievable future. He trained the way he played, he was so competitive. He was meticulous.

“We were at Sheffield and he told me he had the chance to manage Wales. I said: ‘Go.’ He said: ‘But what about you?’ I said: ‘Go, do it. Don’t worry about me, I’ll be all right.’ He offered to pay up the rest of my contract out of his own pocket. I told him not to be silly but that’s how good a man he was. He felt like he was letting me down.”

There is no notion of an Englishman feeling uneasy within a Scotland coaching staff. It seems fitting, in fact, that Carver lives minutes from Hadrian’s Wall. Even the Euros game against England at Wembley – Scotland impressed during a scoreless draw – was straightforward.

“It was weird but I was so proud,” he says. “When they played the English anthem, I thought of Bobby Robson managing England. Then the Scottish anthem is unbelievable and suddenly I was proud to be ‘Scottish’. It was a strange situation. I had mates of mine who are English in with the Scotland fans and they said what an experience it was. That whole game is probably the most relaxed I have ever been because we played so well. I never felt as if we were going to lose. I was really confident and comfortable.

“I get stick from my mates for referring to the Scotland team as ‘we’. That’s just me; I’m all or nothing. Listen, I’m an Englishman and proud to be but I feel part of this, I love the job and love the way the people of Scotland have taken to me.”

Including the country’s elite football players. “The biggest thing I noticed was the togetherness,” he says. “People can pay lip service and say that’s there when it really isn’t. This is one of the best atmospheres I have ever walked into. They actually want to be there. I remember at Newcastle some of the internationals weren’t interested in going to play for their country – they didn’t like it. These guys can’t wait to get there, which makes our jobs so much easier.”