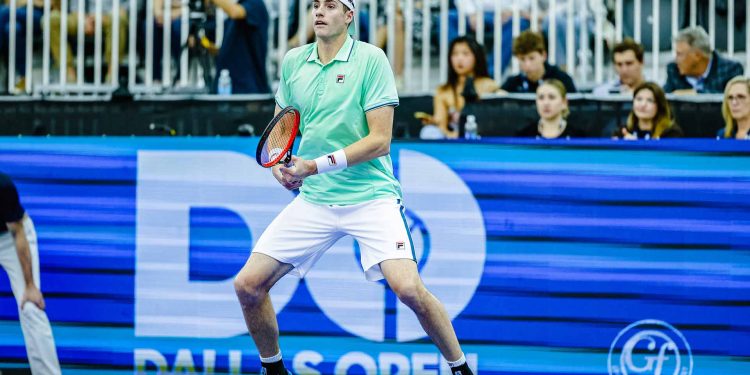 
A bit of home comfort has helped John Isner kickstart his 2022 season with a pair of wins at the Dallas Open.

Playing in front of friendly crowd near his Dallas residence, the 36-year-old American has won consecutive matches for the first time this season following a 6-4, 6-4 result over Vasek Pospisil on Friday evening. After failing to secure a break of serve in his past 13 sets across four matches, Isner claimed a pair of early breaks to set up a straightforward quarter-final victory.

“It was the best match I’ve played all year, bar none,” Isner said post-match. “There’s no doubt about it.”

The third seed needed three tie-breaks to edge Kevin Anderson in the second round, but was able to avoid repeat drama with an efficient performance on the Southern Methodist University campus. Isner created openings in two return games on the night, and converted in both while going 2/4 on his break opportunities. After not facing a break point against Anderson, he saved the only one he faced on Friday as he served out the opening set.

“I didn’t have many chances, but when I did I capitalised on them,” Isner detailed. “A lot of times when you win a close match like I did in the first round, that kind of releases some of the pressure and you can build on that one. I think I did that tonight.”

After hitting 30 aces in that opening-round marathon, Isner fired 19 in just 10 service games against Pospisil.

Through to his first semi-final since the National Bank Open in Toronto in August, he will face compatriot Reilly Opelka on Saturday.

In a 6-3, 6-4 win over fifth seed Adrian Mannarino, Opelka enjoyed a very similar night to Isner in the Friday nightcap. The second seed also advanced behind a pair of early breaks, and did Isner one better by not facing a break point as he completed an all-American final four in Dallas.

“I served really well tonight, and I think that made him a little bit uncomfortable,” Opelka said in an on-court interview. “When you get this guy in a neutral position, he’s not a fun guy to play, that’s for sure. So going into the match I put a lot of emphasis and energy on my serve.”

Continuing the similarities with his big-serving compatriot, the 24-year-old also won a pair of tie-breaks to get to the quarter-final stage, though he did not need a third set to dismiss Germany’s Cedrik-Marcel Stebe. Opelka’s last deep run was also in Toronto this summer, when he reached the final of the Masters 1000- event. Both Isner and Opelka were beaten by eventual champion Daniil Medvedev in Canada.

In their four ATP Head2Head meetings, Opelka holds a 3-1 edge including the three most recent wins, all in 2019. Of the 13 sets they’ve played, 11 were decided by tie-breaks.

“John and I, we’re no strangers to 7-6 in the third,” Opelka previewed. “It’s going to be a fun match against John. I think the best part about this is we have four Americans in the semis, so you’re guaranteed an all-American final and an American will lift the trophy, which is great.”

Fourth seed Jenson Brooksby will face Marcos Giron in the opposite semi-final. (Read the match report for their quarter-final wins here.)

Leggett & Platt: This Time, It's For Real (NYSE:LEG)