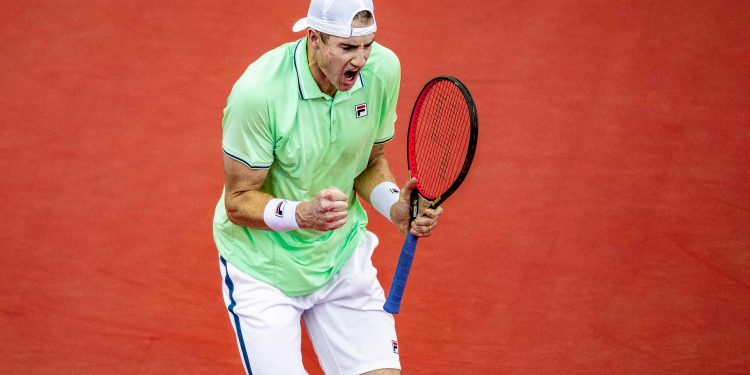 
John Isner expected a tight battle in his opening match at his hometown Dallas Open on Wednesday against Kevin Anderson. That is exactly what the American got.

But despite letting slip an opportunity to close out the match in straight sets, Isner triumphed 7-6(1), 6-7(7), 7-6(5) to reach the quarter-finals at the Styslinger/Altec Tennis Complex.

“It was a good atmosphere for sure and very happy to win that match, especially when I truthfully kind of choked in the second set. Just great to win and I knew it was going to be a coinflip match,” Isner said. “I told my friends, ‘This is a coinflip, this is what it is.’ I haven’t played much, he had a match under his belt. It just was going to be tough the whole way, so hopefully I can build on this.”

Isner had match point on his serve in the second-set tie-break, but hit a double fault (his third and final one of the clash). But the home favourite, who trains at this facility when he is home in Dallas, fought until the end in front of a raucous crowd.

The third seed, who lives within walking distance of the venue, let out a massive roar after delivering a booming serve out wide to complete his victory. Isner hit 30 aces, won 89 per cent of his first-serve points and did not face a break point.

Next up for Isner will be one of two qualifiers. Canadian Vasek Pospisil will face Austrian Jurij Rodionov to earn a chance at taking down the American.

“I’ve never been in this position before [as the top seed] and I have a lot of expectations of myself. Obviously I expect to win the tournament,” Fritz said. “It’s kind of cool being here knowing that I am the top seed.”

In other action, seventh seed Marcos Giron rallied from a set and a break down to eliminate British qualifier Liam Broady 3-6, 6-3, 6-1 after one hour and 40 minutes. Giron will play top seed Taylor Fritz or another countryman, wild card Jack Sock, in the last eight.

The Sierra Leonean proud to have fought in World War Two

NatWest mortgage mix-up has left me nearly £4,000 out of pocket

NatWest mortgage mix-up has left me nearly £4,000 out of pocket