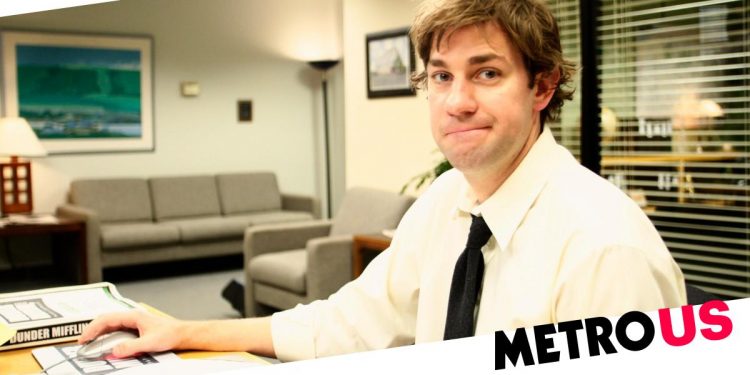 
John Krasinski was left baffled when questioned about a bizarre fan theory regarding his stint in the Office.

The 42-year-old became a household name thanks to his role as Jim Halpert on the US version of the hit sitcom, alongside Steve Carell, Rainn Wilson and Jenna Fischer.

Although the paper salesman became a firm fan favorite due to his adorable romance with Pam Beesly and his (mostly) friendly feud with Dwight Schrute, some viewers were convinced that he was actually the biggest villain of the program.

The Scranton strangler might have something to say about that…

During an appearance on The Tonight Show starring Jimmy Fallon, the host couldn’t help but ask for John’s thoughts on the theory – and he was as confused as the rest of us.

After asking if it was ‘made up’, the Quiet Place actor made light of the question.

‘They’re on to me because I played it as a supervillain,’ he replied. ‘That’s why I did Fantastic Four, to balance it out.

‘I had already done the villain.’

To be fair, there are more than enough villain moments from Jim to make us think twice…

The Office first hit our screens in 2005 and ran for nine seasons, following the inner workings of paper company Dunder Mifflin and the beloved employees.

Fans were recently transported back to Scranton when Breaking Bad star Bryan Cranston revealed that he almost killed the entire cast while guest directing an episode.

In the instalment in question, the gang transferred their office onto a work bus while Dwight fumigated the office, following a prank from Jim – of course.

Popping up for a chat on The Late Show with Stephen Colbert last month, Bryan, who was behind the camera for the scenes, explained that the actors actually filmed in a trailer, which was attached to an AC system.

‘They didn’t think that where the intake for the refrigeration system was exactly lined up to where the tailpipe of the bus was,’ he casually told the host.

‘So, the exhaust of the bus was going right to the intake, cooling it…’

Thankfully, Jenna alerted the cast and crew to the issue, telling everyone that she could ‘smell exhaust’ from inside the bus.

‘I got a chair and I stood up on the thing and I stuck my nose up in there and sure enough it was billowing down,’ Bryan continued. ‘It was carbon monoxide.

‘I wasn’t quite sure so I got a second wind. I got some more, I got nice and dizzy and then realized “Oh my God, we could’ve all been dead”.’

Recalling the drama during a chat with Metro.co.uk, Rainn told us: ‘Bryan directed the work bus episode… It was 110 degrees in the San Fernando Valley and they hooked an air conditioner to the back of the bus to give us extra cooling.

‘It knocked Phyllis [Smith] out, Jenna Fischer threw up on my shoes. Ellie Kemper fell into a coma…,’ he jokingly added.

‘I don’t remember what actual injuries were sustained. But we completely, 100% blame Bryan Cranston.’

Which is totally fair enough…


MORE : Ashley Judd tracked down rapist for ‘restorative justice conversation’: ‘We ended up sitting by a creek together’

An introduction to technical indicators for trading

The Best Site to Buy Video Games Currency You Can’t Miss in 2022 – Z2U.com

The Best Site to Buy Video Games Currency You Can't Miss in 2022 - Z2U.com