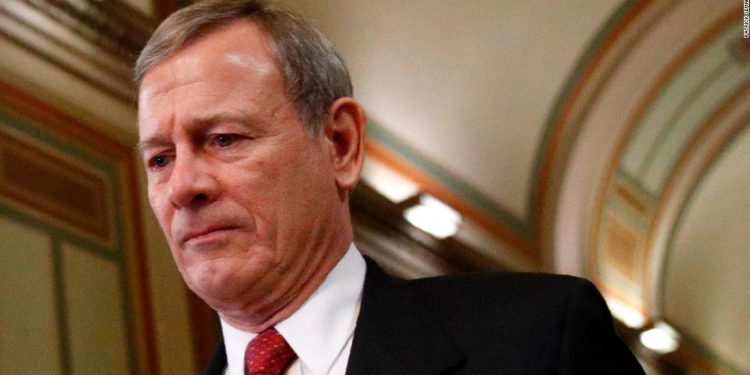 Chief Justice John Roberts said Thursday that the leak of a draft opinion that would strike down Roe v. Wade is “absolutely appalling” and stressed that he hopes “one bad apple” would not change “people’s perception” of the nation’s highest court and workforce.

In his first public appearance since the leak on Monday, Roberts also said that if “the person” or “people” behind the leak think it will affect the work of the Supreme Court, they are “foolish.”

Roberts was speaking at a meeting of lawyers and judges at the 11th Circuit Judicial Conference, while the court is on a brief recess. The justices will meet together again during their closed-door conference in Washington on May 12.

Roberts’ comments come as demonstrations on both sides of the issue have erupted across the country and supporters of abortion rights fear that states in large swaths of the South and the Midwest are prepared to bar the procedure when the court issues a final decision by early July.

The draft opinion – penned by Justice Samuel Alito and published by Politico Monday night – calls on the court to overrule Roe v. Wade, the landmark 1973 opinion that legalized abortion nationwide.

“The Constitution makes no reference to abortion and no such right is implicitly protected by any constitutional provision,” Alito wrote. He said the Roe was “egregiously wrong from the start” and that its reasoning was “exceptionally weak, and the decision has had damaging consequences.”

Roberts did not want to completely overturn Roe v. Wade, meaning he would have dissented from part of the opinion, sources tell CNN, likely with the court’s three liberals.

The court has confirmed the authenticity of the draft opinion, but stressed that it was not final and did not reflect the final position of any member of the court.

Despite the controversy, Roberts appeared upbeat on Thursday, speaking to a roomful of judges and lawyers. Justice Clarence Thomas, who will address the same group Friday, sat in the front row. At one point Judge Ed Carnes, who served as the moderator, referenced how Roberts recently changed the format of oral arguments to allow for fewer interruptions. The new format pleases Thomas so much that after rarely asking questions for years, he now often launches the first question of each session.

On Thursday, Roberts noted that he worked on being an “honest” broker so everyone had a chance to speak and he called on Thomas, in the audience, for his views on the format. Grinning, Thomas simply gave a thumbs up.

“That was a thumbs up,” Roberts said to laughter.

He also praised his colleague Justice Stephen Breyer, who will retire by the end of the term, calling him the court’s “most collegial member.” “I will miss him so much,” Roberts said, but he also admitted that the long hypotheticals that were Breyer’s trademark during oral arguments were at times “absolutely baffling.”

Carnes asked Roberts about his views on several areas concerning the workings of the court. Roberts said that a good brief “should not have a lot of fluff in it.” He suggested that “most” friend-of-the court briefs aren’t useful. “They are helpful when they have a purpose,” he said. He was also critical of law review articles – calling them too “theoretical” at times. At oral arguments, Roberts said, a lawyer shouldn’t “fight a question” but instead, put himself in the judge’s shoes.

He also spoke about his early goal of seeking unanimity on the bench. “I soon learned on the court that unanimous means 7-2,” he joked. But he said that narrower opinions joined by more justices are a “good objective” at times. And he allowed that not all dissents need to see the light of day. He said he saw a good reason for “graveyard dissents” that get buried.

He spoke a bit about his time presiding over impeachment and he said he did homework by reading transcripts of other impeachment hearings. “You want to think you are running this trial,” he said, “but you are not.” But he honored the Senate saying he got a sense of the “real importance of the occasion.”

Roberts was received by the judges and the lawyers with a standing ovation, and arrived with a security detail. The 11th Circuit Judicial Conference press policy rules are so strict that reporters weren’t allowed to bring phones or lap tops into the speaking hall. They were also barred from recording the speech even for note taking purposes.

Roberts who also serves as an ex officio member of the board of the Smithsonian, said he had borrowed one painting to hang in his chambers that depicts an island in Maine close to where Roberts and his wife spend the summer months.

Each term, Roberts said, “I look longingly at it – starting about now.”