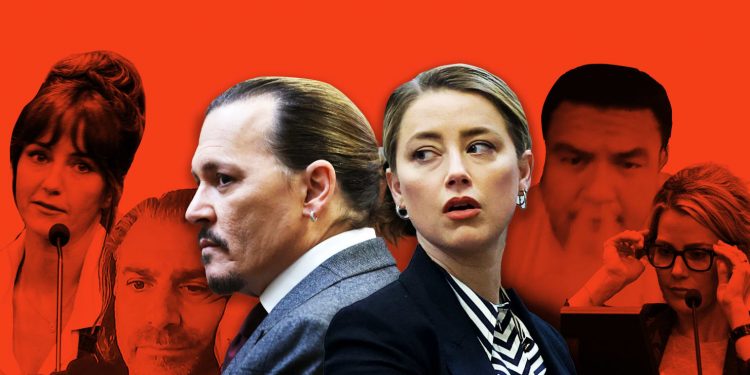 For three weeks, 12 jurors, a gallery of spectators, and hordes of online sleuths have been watching virtually every moment of the $50 million defamation saga between Johnny Depp and Amber Heard in Virginia.

Nothing about the trial—which hinges on allegations of domestic violence—has been routine. Depp opined on the stand for four days about his lavish, drug-fueled lifestyle, painting himself as a victim, despite a British judge having already concluded there was “overwhelming evidence” he abused Amber Heard and left her in fear for her life. He has also repeatedly indulged in bizarro behavior in court, from coloring in impressionist art renderings to munching on gummy bears to giggling. And Depp fanatics have taken to TikTok and Twitter to create harsh memes of Heard reacting to painful testimony.

But if plenty of eyes are on Depp and Heard, the supporting characters in the circus of a trial have threatened to steal the show for themselves.

From a building manager vaping and driving during his video deposition to an expert who got heated about baked goods, the witnesses presented by the actor’s legal team have helped refashion the case into an absurdist drama. Depp’s legal team did not respond for comment for this story.

Jurors are supposed to determine whether Heard acted with “actual malice” when she wrote a 2018 Washington Post op-ed—meaning that the actress knew what she had written was false—or that she published the piece with “reckless disregard” for the truth. In the piece, which does not name Depp, Heard identified herself as having gone public as a survivor of domestic violence two years earlier. In May 2016, Heard had filed for divorce and was granted a temporary restraining order against Depp after she showed up to court with a bruised face. In her application, Heard alleged that Depp threw a phone at her, which he denied.

The crux of Depp’s argument is that he never abused Heard, but she effectively branded him as an abuser, sabotaging his career. The issues are somber ones, and the bar to prove his case is high—the stakes in the tens of millions of dollars.

Some of Depp’s witnesses may ultimately prove up to the task before them: of recasting him as the victim. But just as Depp’s own odd antics could ultimately backfire, his gaggle of colorful witnesses may leave jurors scratching their heads.

A doorman for the Los Angeles apartment building Depp and Heard once lived in, Romero made it clear from the moment his recorded deposition began that he had better things to do.

In a January 2021 taped video played to the court Wednesday, Romero could be seen inside a car as he spoke about his limited interactions with the famous couple.

“I know you guys sent me the papers to review, and I’ll be honest, I didn’t want to review them because it’s been so long,” Romero said at the start of his deposition.

Romero proceeded to opine about how he was “so stressed out” by the case and didn’t “want to deal with this anymore.”

Earning laughs from the courtroom—and Depp himself—with the recorded testimony, Romero was seen at one point driving around and vaping while insisting to lawyers for both celebrities that he never saw any signs of abusive behavior, nor signs of injuries on Heard’s face.

But the manner in which the testimony was delivered was so unconventional that even Judge Penney Azcarate had to comment, quipping after the video ended, “That was a first.”

“I’ve seen a lot of things, but I’ve just never seen that before,” the judge added, prompting one of Heard’s lawyers to agree “that is the most bizarre deposition.”

Christopher Melcher, a celebrity divorce attorney who represented Kanye West in his divorce proceedings with Kim Kardashian, thought Romero’s testimony provided a “human moment” in an already “out of this world” case.

“Trial is theater, and it’s very scripted for the jury and the judge,” Melcher told The Daily Beast. “Jurors in this case are probably already feeling like they cannot relate to some of the issues in Johnny Depp and Amber Heard’s life—but I bet they did relate to the front-desk manager who probably would not take a day off for this video deposition.”

“This is a working guy that doesn’t want to be involved in this case and he was honest about it,” the lawyer, who does not have any affiliation with the parties in the case, added.

An agent at CAA and Lady Gaga’s former fiancé, Christian Carino provided jurors with unique insight into the professional and personal lives of Depp and Heard—including how the actress was involved with billionaire Elon Musk after she and Depp split.

In a two-part recorded deposition, the former agent for both Depp and Heard said that he never heard either of the celebrities accuse the other of abuse. But he did say he suggested the couple seek a marriage counselor to “mediate the difficulties they were having” during their tumultuous, short-lived union. After they broke up, Carino added, he talked to Heard about the Tesla boss, texting her at one point: “You weren’t in love with him and you told me a thousand times you were just filling space.”

Carino also notably appeared to bolster Depp’s claim that his reputation was damaged as a result of Heard’s allegations, referring to the actor losing his role in Pirates of the Caribbean 6 shortly after the 2018 op-ed. (Carino claimed to have had conversations with Disney executives about the subject.) The agent said that while he met Heard through Depp, and was testifying as a witness for Depp, he was no longer friends with either celebrity.

“My opinion is that Amber’s accusations would have had the most dramatic impact on his off-screen reputation. I’m not talking about any one specific accusation,” Carino said.

But the pre-taped video deposition was at least partially overshadowed by Carino’s decision to sit in a fully mirrored room and sip various beverages during the recording. At one point, he appeared to be drinking a beer or hard kombucha—and was seen putting his face in his hands. In a second deposition, Carino appeared in front of a large print of a cartoon woman, leaning toward the camera in apparent annoyance.

Melcher noted that unlike Romero, whose behavior during the deposition process could have been endearing, Carino’s behavior may have come across as pretentious.

“He was in this weird background and he was clearly bothered and didn’t want to be there. He was drinking a lot of drinks,” the attorney said. “He was very dismissive.”

The wife of Depp’s personal assistant, Deuters was set to be an important witness for the actor—until she was ejected from the trial on April 14, shortly after she took the stand.

As she began discussing her friendship with Depp, including how she never saw the actor act violently after using drugs or drinking, Deuters was quickly stopped when a sidebar was requested by the actress’ legal team.

“Have you been watching the trial this past week?” Judge Azcarate asked Deuters after meeting with both counsels.

“I’ve seen clips of it online, yes,” she replied.

The admission prompted Deuters to be excused from the trial and her testimony stricken from the record, as witnesses are generally not supposed to consume media coverage of the proceedings. But jurors were not in the room for the key moment that saw her ejected, and so do not know why Deuters was suddenly taken off the witness stand.

Melcher suggested the swift exit will be impossible for them to forget.

While Melcher believes the judge “acted too quickly” in removing Deuters without asking her details about what she had seen in trial coverage, it is definitely “a looming factor for the jury.”

“You can’t just erase something from your memory. It happened very quickly, so jurors don’t know why she was ejected, which may cause some mystery or doubt,” Melcher added.

A clinical and forensic psychologist testifying on behalf of Johnny Depp, Curry sent out shockwaves when she told jurors on Tuesday that she believed Amber Heard had borderline personality disorder.

But Dr. Shannon Curry, who has worked in the field for about 15 years and focuses on couple’s therapy—and was never Heard’s doctor—blew up the internet entirely when she slammed the actress’ lawyers for asking her about baked goods.

“May I clarify what occurred so that we can stop talking about the muffins?” Curry said during cross-examination.

The outburst came as Heard’s lawyer was grilling the doctor about whether she had told her own husband she was psychologically evaluating Heard as part of her work as an expert witness for Depp last December.

Attorney Eliane Bredehoft began to suggest Curry was “so excited” to take part in the case—so much so that she told her husband she was going to evaluate Heard even though the case was supposed to be “highly confidential.”

Curry ripped Bredehoft for being “not accurate” with the allegation.

“You said you brought muffins from your husband, and you gave those to Ms Heard, correct?” the actress’ attorney asked.

The question prompted Curry to insist they stop talking about food before launching into an explanation about how her husband knew only she was working with a celebrity client—but not which one.

The psychologist added that because she was running late in that case, she asked her husband to “go to the bakery near our house and pick up the muffins for me… he often has to do that because I often do run late.”

“I think I made a comment to her along the lines of, ‘My husband got these for us today,’ meaning he purchased the muffins we are now enjoying because of him,” Curry added of when she met with Heard.

“Why did your husband get the muffins for Amber Heard?” Bredehoft later asked Curry, prompting her to chuckle and insist he did not (knowingly) get them specifically for the actress.

The bizarre exchange invited comparisons to the “Muffin Man” scene from Shrek. In one viral TikTok from an apparent Depp fan, a clip of Curry is interspersed with audio of the movie playing over her. Another TikTok with over 90,000 views referred to the incident as “Muffingate.”

Melcher, the celebrity attorney, argued that while Curry’s frustration may have raised hackles, it did not discredit her testimony—even if it did represent the latest circus-like element in a trial about domestic violence.

“I think her testimony was overall textbook trial behavior, other than the muffin moment,” he said. “That was funny.”