Johnny Depp trial – live: Actor grilled by Amber Heard lawyers over text messages and drug and alcohol use – The Independent 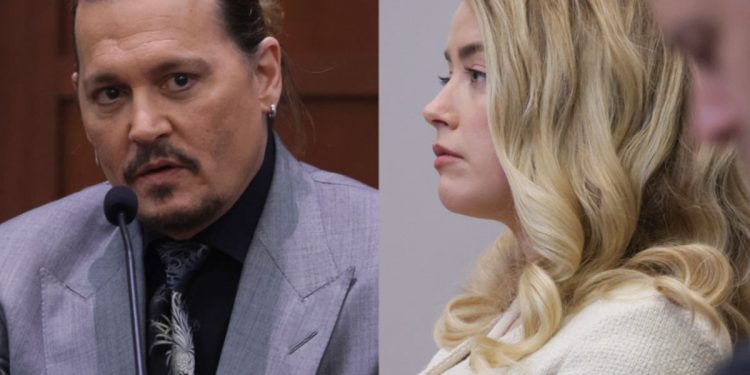 Lawyers representing Amber Heard are cross-examining Johnny Depp following his two days of testimony in the $50m (£38.2m) defamation lawsuit he brought against his ex-wife. The trial is in its second week at the Fairfax County Courthouse in Virginia.

Heard is being sued by Depp for implying he abused her in a 2018 op-ed she wrote. Although she did not name him, his lawyers claim her allegations have made it difficult for the actor to land movie roles, turning him from “Cinderella to Quasimodo” in Hollywood, as the Pirates of the Caribbean actor described it.

The actor recalled a traumatic childhood with an abusive mother and said his relationship with Heard mirrored that, accusing her of “bullying” him in his testimony, as well as recalling a gruesome finger wound and human faeces being found on his bed.

Audio played to the court revealed an argument between the couple in which Heard told Depp “you didn’t get punched” and that “I was hitting you”, in a dispute about a violent episode.

On Thursday morning, Heard’s lawyers challenged the actor over vulgar text messages sent by him, his drug use and drinking, and the length of his sobriety.

Depp says that after his finger was wounded in the vodka bottle fight he dipped it in paint when he ran out of blood to write on the walls.

“After writing on the walls, the blood had kind of dried, as it were. And so I stuck my finger into a can of paint and mineral spirits to put my verbal messages onto the wall,” he says.

Rottenborn then questions Depp about what he recalls of the damage to the house in Australia, including the breaking of a television and a window.

He then asks if Depp defaced a piece of art by drawing a penis on it.

“Drawing a penis on a painting was not the first thing on my mind. I had messages to write, reminders,” says Depp.

Depp says that any requests for ecstasy from him in the messages were on behalf of Heard.

Heard’s lawyer is pushing him about whether after his finger was severed in the fight in Australia he was asking for more ecstasy and cocaine.

Depp disputes the timing of the incident, but again Rottenborn refers back to UK trial testimony.

Depp is being asked about an email he sent in 2013 and later text messages he sent to Stephen Deuters.

The email refers to making music around the time of The Lone Ranger movie and about the use of Lexapro and weed.

In the texts, the actor says the screenplay he received for Pirates of the Caribbean 5 “was not up to snuff” and he felt that it was very lazily written.

Further texts with his other assistant appear to show Depp asking about getting pills from Marilyn Manson’s assistant.

The messages are dated February and March 2015.

The jury in the trial between Johnny Depp and ex-wife Amber Heard was shown a photo of Mr Depp asleep on a couch with ice cream spilt across his lap.

Mr Depp said he had worked a 17-hour day, taken some opioids, and that Ms Heard gave him the ice cream “because she knew what was going to happen”.

Court is back in session after the lunch break.

Depp reacts to audio of himself moaning ‘like a pained animal’

Audio of Johnny Depp moaning in pain after mixing opioids and alcohol was played in court as the actor was cross-examined by lawyers for his ex-wife Amber Heard.

Want to start your day with all the latest US news?

Keep up-to-date with the latest news with our US morning headlines email sent at 7am ET every weekday.

For our full range of newsletters, including US evening headlines, sign up via our newsletters page.

Rottenborn points out a discrepancy regarding Depp’s testimony about the length of his sobriety from alcohol.

Depp testified he had been free from alcohol for 18 months when he went to Australia in 2015.

Heard’s lawyer states that the flight from Boston to LA was less than a year before the actor flew to Australia to film Pirates of the Caribbean 5.

Depp disputes this, maintaining that he only had a glass of champagne and a double dose of his opiod medication on the flight, despite what was said in the text to Bettany.

Rottenborn claims that Depp also lied on his insurance forms for the movie, showing evidence that the actor ticked the “No” box for the question asking if he had used illegal substances whether prescribed by a physician or not.

In a series of questions about his time detoxing and Heard’s role, Depp emailed her mother saying: “I couldn’t have made it without her.”

Rottenborn and Depp disagree on over whether the actor was very drunk on the flight or if it was his opioids.

Says Depp: “I would not agree that I was very drunk on that flight … I had taken a double dose on that Roxicodone, which is different than a blackout.”

The court is then played audio of Depp moaning like an animal after the flight and a voice, believed to be Mr Judge, saying that he would stay with “this f***ing idiot” in case he gets sick.