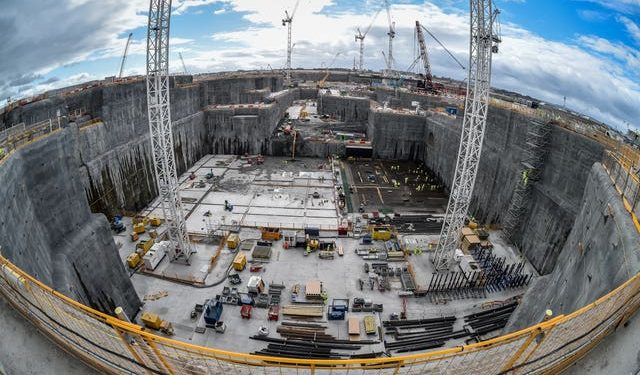 The Prime Minister is set to host a meeting on how to remove the barriers to increasing the UK’s nuclear power output, No 10 has announced.

Boris Johnson will chair a roundtable of leaders in the nuclear industry at Downing Street to discuss domestic nuclear projects as he prepares to publish his energy security strategy this month.

As he looks to wean Britain off dependence on Russian oil and gas following Moscow’s invasion of Ukraine, Mr Johnson has argued that investing in domestic nuclear and renewable energy could be the key to establishing a standalone energy policy.

He told Conservative activists at his party’s spring conference in Blackpool on Saturday that the Government was going to place some “big bets on nuclear power”, including on backing small modular reactors as well as larger projects.

No 10 officials said attendees at Monday’s roundtable are expected to discuss “how Government and industry can work together to remove barriers and progress future nuclear projects in the UK more quickly and cheaply”.

In the past 12 months, nuclear power has provided about 16% of the UK’s energy demands via the National Grid, according to the Balancing Mechanism Reporting Service (BMRS).

However, there are concerns in environmental circles about the amount of time it takes and the methods required to safely dispose of nuclear waste once reactors and plants are decommissioned.

Labour supports building more nuclear energy facilities, with shadow chancellor Rachel Reeves calling during broadcast interviews on Sunday for ministers to “get on with the investment in new nuclear” as well as green energy.

On Monday, Mr Johnson will also meet apprentices in the nuclear industry to hear about how the skills and expertise in the sector are being developed as part of the country’s energy transition, No 10 said.

In the coming days, the Prime Minister is expected to speak to chief executives from the wind sector, as he attempts to further boost home-grown energy sources.

The Treasury minister will meet with technical banks that lend to oil and gas companies operating in the UK and will emphasise the Government’s “commitment to domestic offshore oil and gas production”, Downing Street officials said.

It came as a host of Conservative MPs wrote to Chancellor Rishi Sunak, who is due to give his spring statement on Wednesday, citing their opposition to fracking and exploring for new North Sea gas sites.

The Prime Minister told delegates in Blackpool on Saturday that he planned to “make better use of our own naturally occurring hydrocarbons”.

But the Net Zero Support Group of Tory MPs, which has about 25 members, said any future North Sea gas supply would take “an average of 28 years to begin production” and labelled fracking an “industry of the past”.

Chairman and former science minister Chris Skidmore told the PA news agency: “More wind power, more solar power and more nuclear can become the holy trinity of not only helping reduce emissions but also producing a cheap, secure and, above all, home-grown source of energy that will mean the UK won’t have to rely on outdated, foreign-owned fossil fuels.”

In their letter to Mr Sunak, the group recommended transferring the burden of green levies from bill payers to oil and gas companies, while also embarking on a programme to better insulate homes in order to save households money.

“Ultimately, the cheapest form of energy is the energy that you never have to use,” wrote Mr Skidmore.

“Insulation and energy efficiency have been neglected for too long, yet now is the opportunity to deliver.”