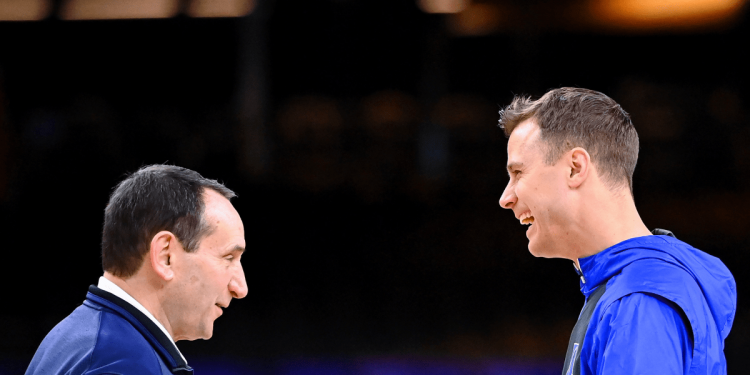 Nearly two weeks have passed since Mike Krzyzewski walked off the court inside Caesars Superdome and gave his final remarks as the men’s basketball coach at Duke.

Krzyzewski’s legendary coaching career ended one game shy of a national championship appearance with a heartbreaking 81–77 Final Four loss to North Carolina. However, the 75-year-old spent 47 esteemed years coaching some of the best to grace the hardwood on the collegiate and NBA levels.

Sweeney: ‘I Could Not Ask for More’: Even in Defeat, Coach K’s Final Chapter Will Endure

At Duke men’s basketball’s end-of-year banquet Thursday, Jon Scheyer—Coach K’s successor—made sure to show his appreciation for the man and the mentor who paved the way for him to gain control of the program, giving him a warm fuzzy gift to start his retirement.

Scheyer and the Duke program gave the iconic coach a dog as a retirement gift. As Krzyzewski grabbed four-legged furball, the dog sat calmly in his arms before licking his new owner’s face.

While retirement will be a big change for the man who spent four decades on the hardwood, Krzyzewski can start this new chapter of his life with a new friend.

What Elon Musk’s bid for Twitter says about social media