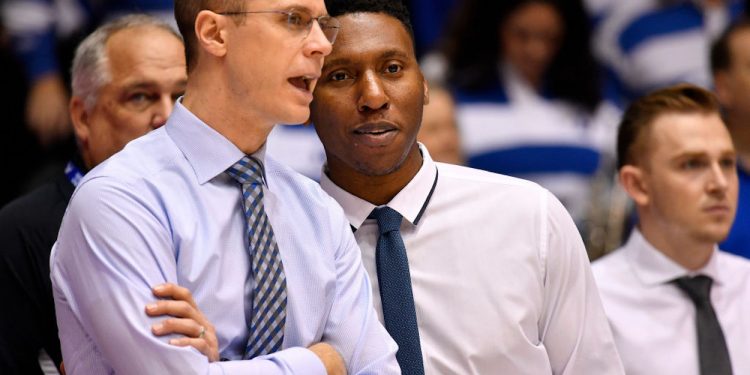 
With the 2021-22 college basketball season officially over, the Mike Krzyzewski era has come to an end. Since 1980, Coach K has been the face of the Duke Blue Devils. Now, it’s Jon Scheyer’s turn to take over the iconic program. While it goes without saying that he’s in for a challenge, the new head coach’s first season may have already gotten tougher.

Next fall, Scheyer will have to lean on his staff; he simply doesn’t have 40-plus years of experience like his predecessor. One of those trusted lieutenants looked to be Nolan Smith, but, according to a recent report, that won’t be the case anymore.

It can be easy to say assistant coaches don’t really matter, but for Scheyer, the change is an early challenge he didn’t need.

Coach K has been stealing the headlines, but Nolan Smith is reportedly leaving Duke

As you might expect, Coach K’s loss to North Carolina and subsequent retirement have dominated the Duke news cycle. While that’s understandable, it also overshadowed another potential departure.

According to the Associated Press (h/t USA Today), Nolan Smith will be leaving Durham to become an associate head coach at Louisville. While the move is yet to be officially confirmed by either school, the dots are there to be connected.

The Cardinals have a new head coach, Kenny Payne, and need to assemble a staff around him. Smith has personal ties to Louisville — his late father played there — and, beyond any sentimentality, the job would represent a promotion. The former Blue Devils guard most recently was an assistant coach at Duke, officially joining the coaching staff in 2021 after serving as director of basketball operations and player development. This role would move him another step up the ladder.

In theory, there’s still time for a last-second audible; plenty of deals have fallen through after reaching the media. The AP report, however, states that Smith has already informed Duke of his decision, seemingly sealing his departure from Durham.

Now that he’s the main man at Duke, Jon Scheyer has plenty of work to do. Losing Nolan Smith will only complicate his to-do list.

Purely from a logistical perspective, Smith’s departure creates a new task that needs to be addressed. Scheyer already had to fill one coaching vacancy thanks to his own promotion. Now, he’ll presumably have to hire another assistant. While you could argue that won’t be a major challenge — just about anyone would want to accept a role with one of college basketball’s premier programs — it still represents a sizable decision.

For a new coach, a staff is everything. They help set the culture and, perhaps more importantly, fill in gaps in experience. It’s easy to write off assistants as guys who hold clipboards and do grunt work, but they will be an invaluable layer of support as Scheyer learns the ropes.

Moving on to the players, Smith’s departure could also affect Duke’s recruiting. As theorized by Jay Williams (h/t USA Today), it’s possible that some of the Blue Devils’ incoming talent, like Dereck Lively II and Dariq Whitehead, have a deeper connection to Smith than Scheyer. While it’s unlikely to affect those stars since they’ll probably be one-and-done players, the coaching change could add another wrinkle beyond this year. Perhaps there are guys within the 2023 class who have already developed a relationship with Smith. Maybe they’ll follow him to Louisville, where they’ll still get to play ACC ball. (Willams also wondered if Krzyzewski could step in to help fill the recruiting void, but we’re not even going to touch that.)

Lastly, there’s the question of how this change affects Duke’s continuity. When Coach K announced his retirement, he tied his decision back to the military concept of succession, in which future leaders are identified and prepared for their role before taking charge. Scheyer was that next leader, and, in theory, his experiences on the Blue Devils’ bench were designed to ensure he was ready for the top job.

Without knowing all of the details, it’s reasonable to assume that Smith featured somewhere in that plan. The assistant played for Coach K and served as a special assistant before being promoted. He then took a seat on the bench as an assistant coach in 2021. Those experiences, not to mention his connection with Scheyer, presumably made him an invaluable part of the new regime. Now, there’s a hole in the hierarchy.

Does Jon Scheyer have the coaching chops to manage the transition?

Trying to succeed Coach K would be a nearly impossible task for anyone, let alone a rookie head coach. Now that he’s (reportedly) faced with another challenge, it’s fair to wonder if Scheyer can handle everything that’s heaped onto his plate.

At the risk of providing somewhat of a cop-out answer, we won’t really know until his head coaching career begins in earnest. Based on what we have seen and heard, though, the former Blue Devil does seem to have something special in his locker.

If you look at the Blue Devils’ crop of incoming freshmen, there’s some incredible talent there. Beyond the aforementioned Lively (the recruiting class’ top-ranked center) and Whitehead (the top-ranked small forward), Duke will bring in Kyle Filipowski, Mark Mitchell, and Jaden Schutt, all of whom rank in the top 10 for their respective positions.

Beyond their sheer skill — even if Scheyer has to learn the ropes, he could get bailed out by his freshman class — that recruiting haul suggests that the young coach has a plan and can articulate it to potential players. Even if you want to argue that the Duke brand is doing most of the heavy lifting, elite players wouldn’t be signing up to waste their one season of NCAA ball with someone they didn’t trust.

Further still, you could also take Krzyzewski’s endorsement of Scheyer as a massive feather in the young coach’s cap. While some could suggest there was an element of selfishness at play, with Coach K wanting someone who he could mold more in his own image rather than an experienced coach like Tommy Amaker, the 75-year-old is also a legendary competitor. Based on everything we know of him, Krzyzewski wouldn’t hand the program he built over four decades to someone who would burn it to the ground. If he didn’t believe Scheyer could handle the hot seat, he wouldn’t have tapped him for the job.

And, if you want someone with a more expert opinion, Jay Bilas is firmly in Scheyer’s corner.

“Jon is not only ready for this; he is fully prepared,” the ESPN analyst told Sportscasting in October 2021. “He’s a super competitive, super-smart young coach, and I think he’ll knock it out of the park, to mix sports metaphors.”

At this point, all we can do is wait and see what happens. One thing, however, seems abundantly clear: Jon Scheyer is going to undergo a serious trial by fire.

The ‘best-paid’ internship in America pays almost $10,000 a month — and it’s a Silicon Valley company

The ‘best-paid' internship in America pays almost $10,000 a month — and it's a Silicon Valley company