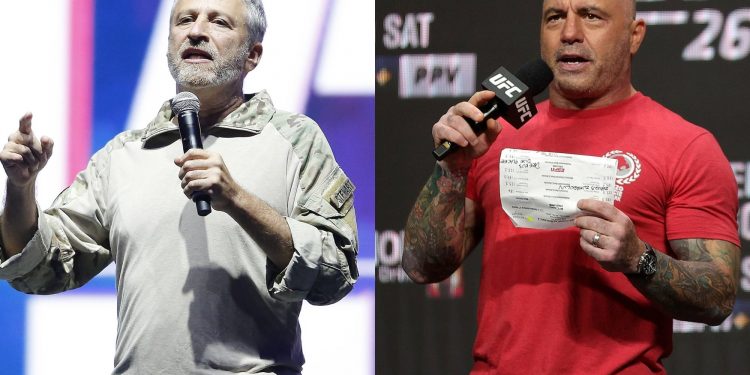 
Jon Stewart has defended Joe Rogan after several artists were asked to be removed from Spotify over comments made on his podcast.

Neil Young was the first to pull his music due to Rogan spreading “misinformation” about COVID-19, with Joni Mitchell and Graham Nash following in solidarity.

Spotify CEO Daniel Ek responded to the row in an official statement, saying that Spotify would be adding COVID-19 content advisories to all relevant podcast episodes and Rogan himself has publicly addressed the backlash in a post discussing “some of the controversy that’s been going on over the past few days”.

Now, Stewart has waded into the row on his own podcast The Problem With Jon Stewart saying artists’ actions towards Rogan were “a mistake”.

“There’s no question that there is egregious misinformation that’s purposeful and hateful, and that being moderated is a credit to the platforms that run them,” Stewart said. “But this overreaction to Rogan, I think, is a mistake.”

He pointed to an episode of the Joe Rogan Experience in which Rogan argued with Australian media personality Josh Szeps about whether COVID-19 itself or its vaccine was more likely to make patients vulnerable to myocarditis.

When the two disagreed, Rogan offered to look it up, and when he was proven wrong he accepted it.

As a result, Stewart believed that Rogan was open to other opinions and urged artists not to not “leave, abandon or censor” but instead “engage”.

Meanwhile, India.Arie has become one of the latest artists to leave Spotify over Rogan’s “language around race”.

She has since shared clips of Rogan referring to Black neighbourhoods as “Planet of the Apes” and using the N-word.

The Dental Chew For Dogs Recommended By A Certified Veterinary Dentist

The Dental Chew For Dogs Recommended By A Certified Veterinary Dentist