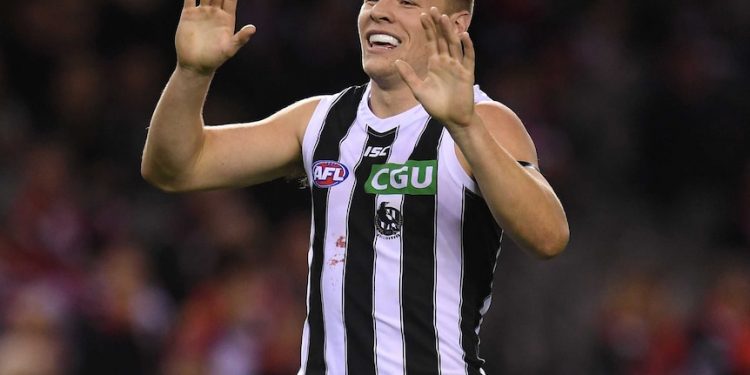 AFL star Jordan De Goey has been welcomed back at Collingwood, ending a three-month exile from the Magpies following his run-in with the law in New York.

The electric utility’s promising career had been hanging in the balance since he was charged after an alleged altercation at a Manhattan bar on October 30 last year.

But De Goey has been offered a plea deal that downgrades his charges.

Collingwood released a statement confirming the club had come to an agreement with De Goey.

“As a result of this in-principle resolution and based on further undertakings given by Jordan to the club, Collingwood has reinstated Jordan to its AFL program,” it read.

“He will do so under club imposed terms that he has agreed to. These are acceptance of continuing and further support off-field and full cooperation with health professionals providing such support. A commitment to permanent, part time work with the Salvation Army.”

On Wednesday the 25-year-old appeared, via video link from Melbourne, in a US court on assault charges.

De Goey had previously pleaded not guilty, but the assault charges were downgraded to second-degree harassment, to which he has now pleaded guilty.

A second-degree harassment violation will not result in a criminal conviction.

De Goey’s lawyer Jacob Kaplan told the court he needed more time to find a counselling program in Australia for the AFL player to participate in as part of any plea deal agreement.

The club received in writing today an agreed settlement that is expected to be ratified at a hearing in the US on January 28.

De Goey was stood down by Collingwood immediately after being charged by police.