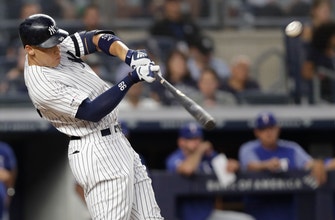 NEW YORK (AP) — Aaron Judge hit a go-ahead, two-run homer to keep up his power resurgence, Gleyber Torres added his 34th home run and the New York Yankees beat the Texas Rangers 4-1 Wednesday night to move 43 games over .500 for the first time since 2009.

Judge is hitting .317 with eight homers and 12 RBIs in his last 15 games. He connected off Lance Lynn (14-10) in the third inning to become the fifth Yankees player with 20 homers this season.

Torres homered in the fourth, tying Gary Sánchez for the team lead and joining Joe DiMaggio as the only Yankees to hit 34 homers at age 22 or younger. The home run was the 200th off the Rangers this season.

The Red Sox won for the 12th time in 17 games and remained 5½ back in the race for the second AL wild card. The AL Central-leading Twins, who had won seven of eight, fell to 5½ games ahead of second-place Cleveland in the division.

Betts homered into the first row of the Green Monster seats on the first pitch of the game from José Berríos (11-8), then sent one out of the ballpark with two on in the second to make it 4-0. Betts added a single down the third base line in the fourth — after taking a pitch — and hit an RBI single in the sixth.

Following a 47-minute rain delay before the first pitch, Rodriguez (17-5) struck out eight and added to his career high in wins. The Red Sox are 12-1 when he starts at Fenway Park, and 10-2 in his last 12 starts overall.

Ryan Brasier gave up a two-run homer to Eddie Rosario, but Brandon Workman got a game-ending double play for his 11th save.

ST. LOUIS (AP) — Kevin Pillar had four hits, including a go-ahead, two-run homer in the eighth inning, and San Francisco rallied to cool off St. Louis.

Brandon Crawford and Mike Yastrzemski also homered for the Giants, who snapped a four-game losing streak. Pillar had three RBIs, including his homer off Giovanny Gallegos (3-2).

Paul Goldschmidt drove in four runs and Paul DeJong homered for the Cardinals, who lost for just the fourth time in 18 games. St. Louis remained 2 1/2 games ahead of the second-place Cubs in the NL Central.

Will Smith got four outs for his 31st save in 35 chances. Rookie right-hander Tyler Rogers (1-0) earned his first career victory with 1 1/3 innings of scoreless relief.

Bieber (13-7), the All-Star Game MVP, allowed two runs and six hits in winning for the first time in five starts since Aug. 9. The right-hander also earned his first victory over the White Sox in three outings this season.

The Indians are in a tight race with Oakland and Tampa Bay for the second AL wild card.

Reyes belted his 34th home run of the season and seventh since being acquired from San Diego to extend Cleveland’s lead to 6-2 in the fifth. He is batting .400 with five homers and 15 RBIs over his last 12 games.

WASHINGTON (AP) — Justin Wilson and the Mets‘ bullpen held on this time, rookie Pete Alonso hit his major league-leading 45th home run and New York bounced back from a brutal loss to stop the Nationals.

A day after a trio of Mets relievers was tagged for seven runs in the bottom of the ninth inning in an 11-10 loss to the Nationals, three pitchers combined to close with 3 1/3 scoreless innings.

After Wilson issued a two-out walk to Kurt Suzuki, whose three-run homer won it Tuesday night, Victor Robles followed with an easy grounder to Amed Rosario. The shortstop tagged second base for the last out, then zipped a relay to first, as if to make sure the Mets really nailed it down.

Mets catcher Wilson Ramos went 0 for 4, ending a 26-game hitting streak that tied for the second-longest in club history.

Zack Wheeler (10-7) earned his first victory since Aug. 6. He needed 101 pitches to complete five innings, but allowed just one run.

The Phillies had their three-game winning streak snapped and slipped three games behind the idle Cubs for the second NL wild card.

Joey Votto homered and had an RBI double off Aaron Nola as the Reds jumped ahead 5-0, but the Phillies’ resurgent offense caught up. Logan Morrison and J.T. Realmuto each hit a two-run homer off Trevor Bauer.

Jay Bruce tied it with his third career pinch-hit homer in the seventh off Lorenzen (1-4).

Jose Iglesias connected for his first career pinch-hit homer against Jose Alvarez (3-4) in the bottom of the inning to break the tie. Lorenzen then homered and moved to center field, with Raisel Iglesias pitching the ninth for his 29th save in 34 chances.

Lorenzen became the first player since Babe Ruth in 1921 for the Yankees to earn the win, hit a home run and play in the field during the same game, according to STATS.

The Royals are the last team in major league history to have a player hit 40 home runs in a season. Previously, Mike Moustakas held the club record with 38 in 2017.

Jakob Junis (9-12) gave up four runs and seven hits over seven innings. Ian Kennedy pitched the ninth for his 26th save in 30 chances.

Elias Diaz started the winning rally with a leadoff homer against Jose Urena (4-8) that drew the Pirates within a run. Pinch-hitter Kevin Kramer walked and went to third on Adam Frazier’s double before Reynolds flared a single into left-center to give the Pirates their fifth win in six games.

Garrett Cooper’s two-run homer off Kyle Crick with two outs in the seventh put the Marlins ahead 5-3.