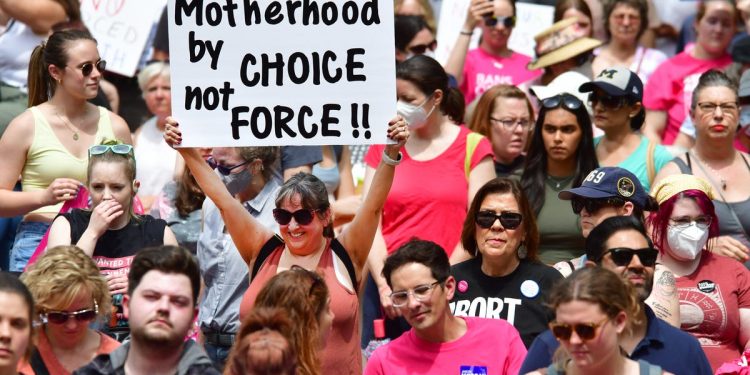 A Michigan Court of Claims judge has granted a preliminary injunction to Planned Parenthood of Michigan that would stall the enforcement of Michigan’s 1931 abortion ban should the U.S. Supreme Court overturn the landmark 1973 Roe decision enshrining abortion as a constitutional right.

Court of Claims Judge Elizabeth Gleicher issued a preliminary victory to Planned Parenthood of Michigan that would stall the enforcement of Michigan’s 1931 abortion ban should the U.S. Supreme Court overturn the landmark 1973 Roe decision enshrining abortion as a constitutional right.

Democratic Attorney General Dana Nessel said she won’t appeal Gleicher’s order. Nessel, the named defendant in the case, said the ruling against her office is a “victory for the millions of Michigan women fighting for their rights.”

Gleicher granted the preliminary injunction in an order that concluded Planned Parenthood was likely to succeed on arguments that “forced pregnancy” is a threat to a woman’s constitutional right to bodily integrity and due process.

“Forced pregnancy, and the concomitant compulsion to endure the medical and psychological risks accompanying it, contravene the right to make autonomous medical decisions,” Gleicher wrote.

“If a woman’s right to bodily integrity is to have any real meaning, it must incorporate her right to make decisions about the health events most likely to change the course of her life: pregnancy and childbirth.”

Planned Parenthood filed the lawsuit against Nessel in April, asking the court to find a right to abortion in the Michigan constitution that would override the ban first established in 1846 and reenacted in 1931. The ban has lain dormant following the 1973 Roe decision.

The Planned Parenthood suit was filed on April 4, the same day Michigan Gov. Gretchen Whitmer filed a similar challenge in Oakland County Circuit Court against 13 county prosecutors who would be tasked with enforcing the ban at abortion clinics in their counties. Whitmer accompanied her filing with an executive message to the Michigan Supreme Court asking the high court to consider the case immediately instead of waiting for it to be appealed to the justices.

Dr. Sarah Wallett, the chief medical officer for Planned Parenthood and a plaintiff in the suit, said Tuesday’s decision is an assurance that she’ll be able to continue caring for her patients.

“This morning I was planning for the possibility that abortion would be illegal in Michigan, and we would not be able to care for any patients who needed abortion care within our state borders,” Wallett said.

The Alliance Defending Freedom, a group intervening in the suit on behalf of Right to Life and Michigan Catholic Conference, criticized the decision given the lack of a party being hurt by the 1931 law and Gleicher’s relationship with Planned Parenthood of Michigan.

“The ruling today is absolutely egregious,” said John Bursch, the state’s former solicitor general and an attorney for Alliance Defending Freedom. “Because the defendant Attorney General Dana Nessel was not defending the law, the court had no jurisdiction.”

Bursch said the group is exploring its legal options, which includes pursuing appellate review “of a rogue appellate court judge.” The GOP-led state Legislature could intervene to appeal the decision but, as of Tuesday, the House was still reviewing its options, said Gideon D’Assandro, a spokesman for House Republicans.

Whitmer welcomed the decision in a Tuesday statement as an “important victory for Michiganders.”

“While today’s preliminary injunction offers immediate, critical relief, we need the Michigan Supreme Court to weigh in and establish the right to abortion under our state constitution,” Whitmer said. “We must protect the rights of nearly 2.2 million women in Michigan to make decisions about their bodies because, however we personally feel about abortion, a woman’s health, not politics, should drive important medical decisions.”

Adversity in the case

The lawsuit has been criticized by anti-abortion advocates because it was filed against what they called a friendly party because Nessel said neither she nor anyone in her office would defend the state law.

Additionally, Gleicher disclosed early on in the case that she was a regular donor to Planned Parenthood of Michigan and had represented the group in a key case challenging the constitutionality of the law.

On Tuesday, Nessel praised the judge for acting quickly “to preserve this important right.”

The attorney general’s praise came after she earlier this month said the case should be dismissed because there are no adverse parties nor is there a case or controversy upon which the case could be built.

Gleicher disagreed and said such an argument would destroy a plaintiff’s “ability to obtain a meaningful legal ruling with actual effect.”

“According to defendant’s thesis, in any case challenging the constitutionality of a statute the attorney general would be empowered to derail a constitutional challenge by simply communicating a non-specific consonance with the plaintiff’s position,” Gleicher wrote.

“…the attorney general’s unwillingness to stipulate to a preliminary injunction or any other relief creates adversity in this case.”

Planned Parenthood presented a “procedurally complicated case” to the Court of Claims, said Barbara McQuade, a University of Michigan law professor and former Detroit U.S. attorney during the Obama administration.

Opponents raised a legitimate question about whether the case is ripe before Roe is overturned, she said, but it is reasonable to argue the law should be reviewed now because abortion decisions are extremely time-sensitive.

“It makes it a little more complicated in terms of who has standing,” McQuade said. “If you wait until the law’s on the books and then file the lawsuit, you’re several weeks or months away from getting a resolution.”

McQuade said Michigan voters have a reason to argue Nessel should have found a way to defend the law, perhaps by hiring an outside counsel or walling off part of her office instead of defending it herself.

The judge argued that the 1997 Court of Appeals decision in the Mahaffey case — where she served as counsel to Planned Parenthood — established that the Michigan Constitution’s right of privacy did not include a right to abortion.

But, she noted, Planned Parenthood in 2022 is not invoking protections for abortion under the right to privacy; instead, it is saying the right to abortion lies in the Michigan Constitution’s right to bodily integrity and due process, which were not decided in the Mahaffey case.

“Pregnancy implicates bodily integrity because even for the healthiest women it carries consequential medical risks…thus, the link between the right to bodily integrity and the decision whether to bear a child is an obvious one,” Gleicher wrote.

Bursch took issue not just with Nessel’s position on the issue and Gleicher’s relationship with Planned Parenthood but also the ability to pluck out a right out of the Michigan Constitution that he said hadn’t been there for decades.

“Somehow this right was hiding underneath the surface for nearly a half a century until Judge Gleicher, Planned Parenthood’s former attorney, mysteriously found one,” he said.