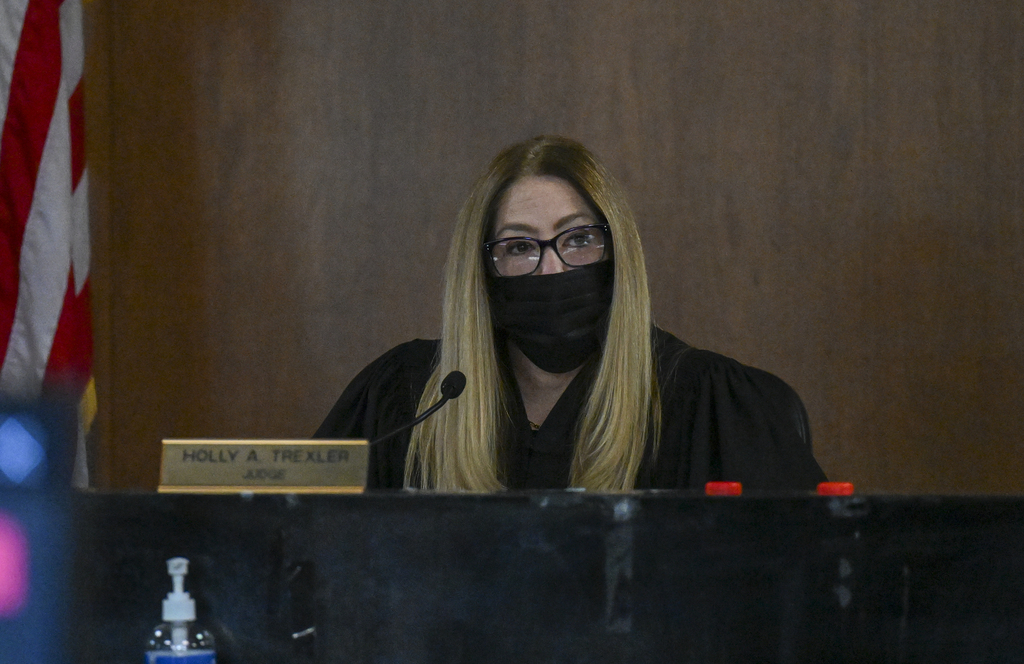 ALBANY, N.Y. — The only criminal charge filed over the sexual harassment allegations that drove former New York Gov. Andrew Cuomo from office was dismissed Friday at prosecutors’ request, clearing what had been seen as the most serious legal threat to the Democrat.

The move had been expected after Albany County prosecutors said they couldn’t prove the case and intended to drop it.

Cuomo, who denied the allegation that he groped an aide in the executive mansion in 2020, didn’t speak during Friday’s short hearing, held with the judge sitting in an Albany courtroom and the lawyers and defendant appearing via videoconference.

Wearing a black mask, Cuomo was visible for only a few seconds when his lawyer, Rita Glavin, swiveled her camera to show him in the room.

“As the governor has said, this simply did not happen,” Glavin said in a video statement after the hearing. “Today, reason and the rule of law prevailed. Not politics, rhetoric or mob mentality,” she added.

During the hearing, which lasted only a few minutes and would have been even shorter if not for audio glitches, Assistant District Attorney Jennifer McCanney told the judge prosecutors had reviewed the evidence “and concluded we cannot successfully secure a conviction in this case.”

“A court may not and should not interfere with discretion of a district attorney,” she said.

Cuomo could still face lawsuits if his accusers choose to take him to court.

Some, including Commisso, have indicated they plan to do so. Cuomo spokesperson Rich Azzopardi bristled Friday that the former governor “will not pay one penny in attempts at civil extortion.”
The local sheriff filed the misdemeanor complaint in October, two months after Cuomo resigned from office.

Albany County District Attorney David Soares said this week that although the aide was credible, and some evidence supported her account, he believed he couldn’t win a conviction.

The aide, Brittany Commisso, said Cuomo slid his hand up her blouse and grabbed her breast when they were alone in an office at the mansion.

Her testimony was among the most damning in a report released in August by Democratic state Attorney General Letitia James that concluded Cuomo sexually harassed 11 women. He said he never touched anyone inappropriately.

Cuomo resigned that month. He has called the report unfair.

Soares has said he was caught by surprise when Sheriff Craig Apple, a fellow Democrat, filed the forcible touching complaint without consulting the prosecutor’s office. Soares called it “potentially defective” and moved to delay Cuomo’s arraignment, originally set for November.

In a letter to Trexler on Tuesday, Soares said “statutory elements of New York law make this case impossible to prove.” He added that government inquiries into Cuomo’s conduct had created “technical and procedural hurdles” regarding prosecutors’ obligations to disclose evidence to the defense.

Glavin on Friday called the complaint “a blatant political act,” branded Apple a “rogue sheriff” and assailed Commisso, saying no jury would have found her credible.

Apple has shrugged off previous attacks by Cuomo’s representatives as unfounded.

Some legal experts said Soares’ decision illustrated the difficulties of prosecuting sex crime allegations. But others said he should have proceeded if he believed the accuser.

Commisso didn’t respond to a request for comment, made through her lawyer Friday, but earlier this week she had blasted Soares for giving up on the case.

“My disappointing experience of re-victimization with the failure to prosecute a serial sexual abuser, no matter what degree the crime committed, yet again sadly highlights the reason victims are afraid to come forward, especially against people in power,” Commisso said in a statement Tuesday to the Times Union of Albany.

The Associated Press doesn’t identify people who say they have been sexually assaulted unless they decide to tell their stories publicly, as Commisso has done in interviews.

Soares, in a radio interview Friday, noted that the attorney general’s inquiry didn’t have the same legal requirements as a criminal case, and he said prosecutors can’t be swayed by public sentiment or “passions.”

“It’s not for me to engage in any kind of debate with those who aren’t equipped with as much information or the obligations that I have. Everyone is entitled to an opinion, but there’s only one person with a burden of proof, and that’s me,” he told the WAMC/Northeast Public Radio network.

Two prosecutors in the New York City suburbs separately announced last month that Cuomo would not face charges for allegations involving other women who said they had been subjected to unwanted kisses or touches.

James, meanwhile, is still looking into whether Cuomo improperly used state workers and resources for his coronavirus pandemic memoir. He’s also tussling with state ethics commissioners who won him to turn over $5 million in book proceeds.

The U.S. Department of Justice in August opened a civil inquiry into sexual harassment allegations concerning Cuomo. The status of that investigation is unclear.