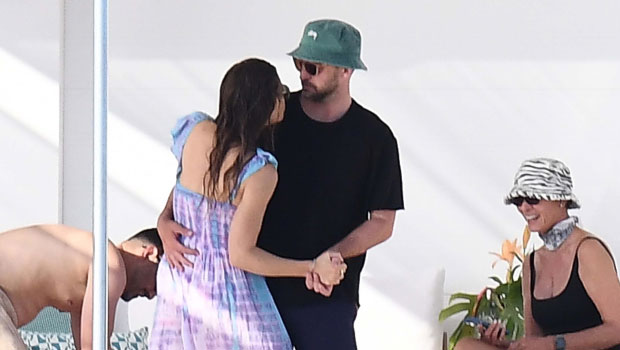 
The couple that slow-dances together, stays together! Justin Timberlake and his wife of 10 years, actress Jessica Biel, showed off their moves on the deck of a luxury yacht in Sardinia on Friday, July 29. The superstars were all smiles as they linked arms while twirling around off the coast of the Italian island. With Justin in a green bucket hat, black tee and swim shorts and Jessica rocking a chic tie-dye summer dress, their group of friends couldn’t help but enjoy the adorable dance routine.

With Justin and Jessica previously seen packing on the PDA and taking in the gorgeous surroundings during their getaway, the “Sexy Back” singer clearly had some time to recover from his recent choreographed faux pas. In June, the singer made amends for an awkward dance routine during his performance at the Something in the Water Festival in Washington, DC. “D.C., I want to apologize to you for two reasons: here and here,” he said in his Instagram Stories at the time, zooming in on his feet. “I had a long talk with both of them, individually, and said, ‘Don’t you ever do that to me again.’”

The Social Network actor was lambasted after he attempted to do the “Beat Ya Feet” dance, which is a popular routine in D.C. “Justin Timberlake said ‘DC beat your feet’ and proceeded to do the hokey pokey,” wrote one Twitter user after a video of Justin’s dance went viral. Another added, “Justin Timberlake looks like a Vice Principle trying to have a dance off in the hallway with his students,”

As some even commented on his wardrobe, calling out his “dad khaki’s,” Justin took the note and apologized for that as well. “Maybe it was the khakis. It was a real khaki vibe,” he joked in his video mea culpa, before promising his feet would “get it right” going forward.

Meanwhile, Justin and Jessica will be be celebrating their 10th wedding anniversary in October, having gone public with their relationship in 2007 and marrying in 2012. The couple now share sons Silas, seven, and Phineas, two.

Janet Jackson Super Bowl Scandal: What To Know About The Backlash & Feud With Justin Timberlake