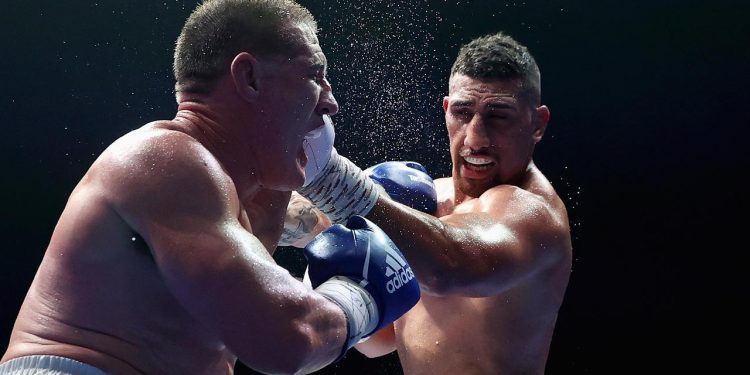 
Just 24 hours after Joe Goodall won on his US debut to continue his unbeaten run, the Australian is one step closer to locking in his highly anticipated bout with Justis Huni.

It’s understood a contract and agreement is set in stone between the two parties after their bout earlier in the year was cancelled after Huni contracted Covid twice in quick succession.

All that is left to iron out is a date, with June 22 shaping as a possibility.

The bout would pit the two best Australian heavyweights against one another.

‘I don’t understand what the hold-up is,” Goodall told News Corp following his first-round knockout victory over the weekend.

“There’s a lot of politics in boxing.

“It’s still in the works, I won’t say they’re ducking me, but they were jumping out to fight me so if they pass on me now it’s pretty obvious.”

Huni’s camp remains keen as mustard to test themselves against Goodall and see the fight as yet another stepping stone on the way to cracking the heavyweight’s top 10 by year’s end.

Huni, too, is keen for the fight to go ahead.

“That fight to me is the best of the best for heavyweights in Australia, myself and Joe Goodall fighting,” Huni told foxsports.com.au.

“That’s going to be the biggest heavyweight fight in Australia for a long time.

“But I’ve got a fight ahead of me against Kiki Leutele that I’ve got to worry about and I’m not going to look past that.”

Goodall is now 8-0-1 (7KO), and the weekend’s result over Matthew McKinney was his sixth first round knockout.

It was also his first fight under famed trainer Kevin Barry, who guided Joseph Parker to the world heavyweight title.

“People don’t realise how powerful Joe is, I’ve had him sparring some of the best, undefeated prospects in the heavyweight division and he has tested them,” Barry said.

“Joe versus Huni is a great, tough fight.

“Huni is the golden boy of Australian heavyweight boxing, everyone is talking about him, and Joe is like the mongrel dog, everyone has forgotten what he achieved in the amateurs when he was Australia’s No.1 amateur.”

Huni is planning on making up for lost time.

After missing the Olympics after undergoing surgery on his broken hand, the 22-year-old is out to turn the focus back on him after his epic win over Paul Gallen last year.

“I’m going to pump out the fights this year,” he said.

“Obviously I have to keep winning to progress my way up the rankings.”

‘HOW THE F***’: Tszyu reveals ‘s*** thoughts’ after early knockdown

WHAT’S NEXT?: Tszyu primed for world title shot… but there could be a twist

Taking down Leutele on the Gold Coast on May 11 and then backing it up by defeating Goodall a month later will do just that.

“I would expect by the end of this year Justis will be in the top 10 of the world and we’re going to start those moves probably on June 22 when we fight Goodall,” Lonergan said.

Huni’s camp believe the heavyweight boxing world is on the cusp of a monumental shift and are hoping to make their move as a couple of the biggest names contemplate retirement.

“Here’s the deal, if we get to the end of the year in the top 10, we’re only two fights away from the big time,” Lonergan said.

“The decision will be how fast do we want to move? Because that heavyweight division is about to explode.

“Tyson Fury’s talking about retiring after the (Dillian) Whyte fight and the guys that are there are getting older … Andy Ruiz seems to have other interests, Joey Joyce, whilst he’s only new on the scene, I think he’s 36.

‘Got a lot of skills’: Boxing kingpin’s high praise for Huni after star’s ‘crazy’ US experience

Taste of success: how British drinks brands are broadening their horizons | Going global with business

Taste of success: how British drinks brands are broadening their horizons | Going global with business