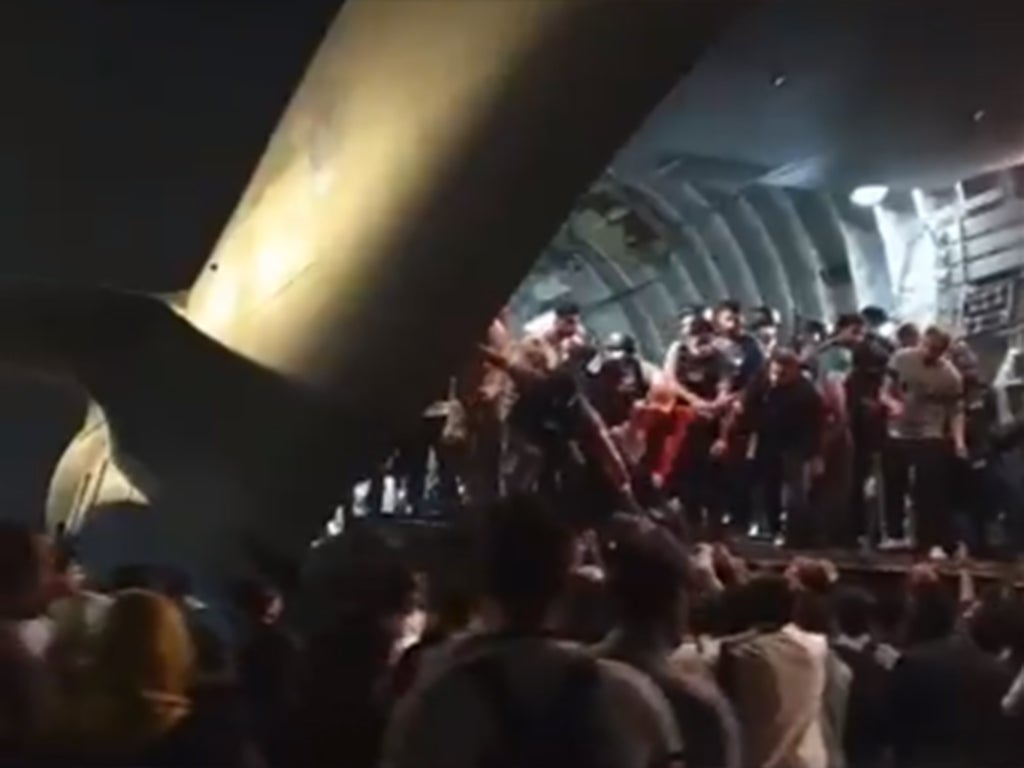 Videos depicted a chaotic scene at Kabul airport on Sunday, the only way out for thousands of people following rapid advance of the Taliban into the capital, and toppling of the country’s government.

Both remaining US personnel and Afghans fearing the return of Taliban rule were seen climbing onto military aircraft.

Chinook helicopters had shuttled back and forth between the US embassy and airport all weekend to remove remaining staff.

The American flag has since been removed from the now-empty embassy and personnel are reportedly holed up at the airport.

The scenes drew comparisons with the departure of US forces and civilians from Saigon at the end of the Vietnam War, prompting flat-out denials from the White House.

“Let’s take a step back. This is manifestly not Saigon,” Secretary of State Antony Blinken told ABC News on Sunday.

As darkness fell in Kabul on Sunday, gunfire was reported around the airport. Any US citizens remaining in Kabul were advised by the US embassy to shelter in place following the reports of gunfire.

Pentagon officials did not respond to a request for comment from The Independent on how many US personnel remained.

Thousands of US troops were deployed to the county by President Joe Biden this weekend to safeguard the removal of Americans and Afghans who work for the US government.

Several thousand more troops are reportedly on standby in nearby Kuwait. Any US citizens remaining in Kabul were advised by the US embassy to shelter in place following the reports of gunfire.

Top Afghan officials were reportedly among some of those who made it out on the last commercial flights from the country.

Taliban officials have proclaimed that the “Islamic Emirate of Afghanistan” will succeed Mr Ghani’s government.

The militant group now controls every major city and all border crossings in the country.

Biden May Be Held Accountable for Disastrous Taliban Takeover

By Spencer Soper and Ella...